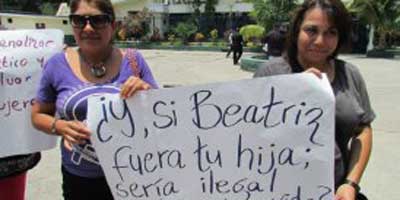 Campaign groups are pressurising the El Salvadorian government to adjust the legislation in order to save a young woman, Beatriz, for whom an abortion could be life-saving . Photo: Vernon Shaw via Creative Commons.

Abortion: it is an issue that has evoked controversial discussion world-wide for generations.  Those who take a pro-life stance claim that abortion is murder, whereas pro-choice groups stress the rights of each woman to decide what happens to her body and her family.  Globally, the legal banning of abortion has merely driven it underground, making abortion a significant contributor to maternal death across the world.

This issue has recently been brought, once again, to the forefront of discussion within the human rights community.  Juan E. Mendez, the UN Special Rapporteur on Torture and Other Cruel, Inhuman and Degrading Treatment or Punishment, recently dedicated a section of his latest report to violations of female reproductive rights.

In this, Mendez states that:

"International and regional human rights bodies have begun to recognize that abuse and mistreatment of women seeking reproductive health services can cause tremendous and lasting physical and emotional suffering, inflicted on the basis of gender"...

and, on abortion in particular:

"The Committee against Torture has repeatedly expressed concerns about restrictions on access to abortion and about absolute bans on abortion as violating the prohibition of torture and ill treatment."

Abortion bans are inflicting, according to these findings, physical and emotional torment on women in an alarming number of areas around the world:

'In the landmark decision of K.N.L.H. v. Peru, the Human Rights Committee deemed the denial of a therapeutic abortion a violation of the individual‟s right to be free from ill-treatment."

In many areas of the world, doctors are reluctant to give medical care to women suffering from complications of back-street abortions, for fear they will suffer repercussions from the state. Reports by Amnesty International corroborate this; Nicaragua, where there is a total ban on abortion, is held up as a key example.

In 2009, Amnesty International called on the Nicaragua to repeal the full ban:

"Amnesty International considers that the full ban on abortion in Nicaragua – including in cases where a woman’s health or life would be at risk if the pregnancy continues or where that pregnancy is a result of rape – is a violation of women's and girls' human rights, including the right not be subject to torture, cruel, inhuman and degrading treatment.

The organization is calling on the Nicaraguan authorities to repeal the full ban on abortions and ensure doctors are not prohibited from providing medically indicated treatment to women and girls in need."

Mendez’ findings were announced at the UN general assembly in February this year.  The widespread prejudice aimed at women seeking abortions, for all reasons, makes the process uncomfortable and humiliating for the women involved.  Even in countries where abortion is legal in certain circumstances, women are often subjected to degrading interviews.

This issue in particular is in hot debate at the moment in Ireland, where a bill, supposedly suggesting any woman who is considered for abortion must face interview by 6 different doctors, even if she is suicidal or emotional fragile, is being talked about.  The Irish minister for health, James Reilly, maintains that this would not be the case if a woman was deemed to be vulnerable; despite this, abortion remains a difficult issue in Ireland.

The UN report claims that in many countries, abortion is so wholly opposed that expectant mothers are denied the right to prenatal genetic testing for potential serious foetal illness.

The World Health Organisation is also focusing on this issue, directing their concern towards the welfare of women seeking abortion.  This apparent global trend of denying medical treatment to women is furthermore contradictory to Article 7 of the International Convention on Civil and Political Rights, and is therefore demanding increasing attention from the international community.

The Guttmacher Institute, an organisation focusing on women’s reproductive health, has gathered some shocking statistics concerning global abortion.  In a study published in 2009, of 197 countries between 1995 and 2003, abortion rates dropped from 45.5 million to 41.6 million despite population growth, dispelling the somewhat inflammatory view that abortion is at a high.  Nineteen countries have liberalised their abortion laws over the 8 years studied, compared with tighter restrictions in just three. But despite this liberalisation, some 40 percent of women still face strict restrictions.

Criminalising Abortion Does Not Reduce Abortions

The key point that stands out from these facts is the lack of correlation between the legal status of abortion and the rate of its occurrence.  For example, there is a 90 percent ban on abortion in Latin America and Africa, where abortions are most severely limited, yet countries in these areas have some of the highest global abortion rates: 31 women in every 1000 in South America, and 29 out of 1000 in Africa.

The worryingly high rate of women seeking back-street abortions reflects the highly dangerous nature of these procedures; every year, 70,000 women die after illegal abortions, an estimate that has hardly changed between 1995 and 2009, and a further eight million suffer from crippling or irreversible complications.

It seems undeniable, therefore, that criminalising abortion is not the way to tackle this delicate issue.  Focus must instead be put on sexual and reproductive health education, and easier and wider access to contraception.  When put into practice, these measures can produce staggering results.

In the Netherlands, a wide range of contraception is freely accessible, resulting in this country enjoying a remarkably low abortion rate: just 10 in every 1000, compared with a global average of 29 out of a 1000.  Furthermore, in Eastern Europe, an area which previously saw abortion as a means of birth control, abortion rates fell by 51 percent in the years studied in the 2009 report, due to increased contraceptive availability.

Despite this, 47 percent of the health measures proposed globally so far this year have sought stricter restrictions on abortion.  In 2013 in the USA, 14 states have also sought a total ban on abortion.

It is clear that the ‘legal or illegal’ debate is not an effective way to deal with abortion.  The facts do nothing but support this: in Europe, where abortion is widely accepted, the rates are some of the lowest in the world; with only 12 in 1000 pregnant women seeking terminations across the continent.

In the developing world, it is estimated that 222 million women want to avoid pregnancy or be in control of their family planning needs, but are without access to adequate contraceptive methods.  If the changes suggested by organisations such as the Guttmacher Institute and other reproductive rights campaigns were implemented, it estimates that the global abortion rate would fall from 41.6 million to 14.

Over 1 in 10 Maternal Deaths Due to Unsafe Abortion

Despite these statistics, Mendez’ recent comments have been met with some fierce resistance.  The Weekly Standard is just one such example, ridiculing the UN rapporteur’s association between inhumane treatment and the emotional humiliation and physical injury women suffer when seeking abortion.  Furthermore, the CSW (Commission for the Status of Women) has spoken out against these remarks, denying that improved reproductive rights will empower women.

Abortion is, unsurprisingly, an issue that will continue to inspire controversy and division of opinions.  As the importance of women’s rights becomes more widely acknowledged, it should hardly be necessary to stress that a woman has a right to decide what happens to her body.  It seems that to those strongly opposed to abortion under all circumstances,

Mendez’ findings would have been deemed unacceptable as soon as the issue of the need for safe abortion was mentioned.  However, it seems that the bulk of those disagreeing with this view are somewhat misinterpreting what is being suggested here.  The use of abortion as a form of birth control in instances where people chose not to use contraception, or the disregard of the gravity of such a decision, gives the image of abortion a negative connotation to those who see it as a throw-away decision of the irresponsible.  Perhaps there is some justification to that.  What is being dealt with here, however, is a totally different issue:  The depth of research conducted by organisations such as the Guttmacher Institute provides a compelling case.

Abortion is Not a Decision Taken Lightly

The majority of women seeking abortions globally are not doing so lightly; the lack of access to adequate education and contraceptives, compounded by wider issues such as child and forced marriage or rape, are to blame for a woman’s lack of control over her family planning.

The statistics demonstrate how many women die every year from unsafe abortion; these women would most likely have been aware of the risk to their lives before this undertaking; a decision that is not taken lightly.  As has been indicated many times, criminalising abortion neither takes away the need for it nor diminishes the rate at which it occurs.

The unfounded fear that a tolerance of a woman’s choice for abortion will result in a huge spike of terminations must be dispelled through education and greater awareness of the facts around this issue.

Those who disapprove of abortion on religious or other moral grounds may never come to see the important role the potentiality of abortion can play in women’s health; such is their right.  However, for the women affected, their ability to seek medical help without fear of persecution will be revolutionary.

To encapsulate this, an extremely contemporary example: Beatriz, a 22 year old woman from El Salvador, suffers from Lupus.  As such, her current pregnancy is debilitating her to such a degree that she is likely to die if she does not have a termination.  Living in El Salvador, however, where there is a total ban on abortion, this is not possible.  Scans show that the foetus is anencephalic - missing a large part of the brain and skull.

Campaign groups are currently pressurising the El Salvadorian government to adjust the legislation in order to save this young woman, wife, and mother, from an untimely and unnecessary death.  Whether this will become the case is yet to be seen.

Save Beatriz's Life and Allow Her Abortion! - Care2