Will the Arms Trade Treaty Make the World Safer? 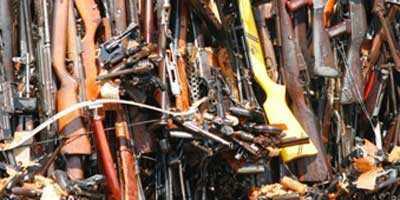 By Peter Hilton, Global and UK Correspondent for Safe World for Women. April 2013

After seven years of long negotiations, an Arms Trade Treaty that should see a sharp decline in human rights abuses using conventional arms has been voted into the UN legislation, with a sweeping majority of 154 nations voting to pass the treaty. This comes after the same ATT (Arms Trade Treaty) failed to reach the necessary unanimous agreement to see the treaty passed at a UN conference last Thursday, with only North Korea, Syria and Iran objecting to the proposal. This treaty will make it illegal to trade arms between nations if it is considered likely that they will be used to commit human rights abuses. The treaty also protects those in the most vulnerable groups, with clauses to prevent the sale of guns if there is reason to believe they would be used against women and children, or to perpetrate gender based violence.

This is far from the first attempt at implementing a UN treaty regarding the Arms Trade. In July 2012, a similar summit in New York failed to reach a unilateral agreement on new regulations to the Arms trade, but many nations have clearly become more receptive to the need to stop human rights abuses. The first ever UN arms trade treaty has come at a pressing time with many conflicts still occurring across the globe, leading to numerous human rights abuses. Only three of the total 193 UN member states voted against the deal, these three comprising of Syria, Iran and North Korea, all of which have appalling histories of human rights abuses.

North Korea, is a highly militarised state having recently declared itself as ‘in a state of war’ with South Korea, despite the armistice between the two nations. Its actions in attempting to block the treaty are clear as it depends on weapons to maintain the suppression of its populace. Charges levied against the state include repression of free speech, public executions, and based on a report compiled by Amnesty International, the unjust imprisonment of as many as 200,000 people in concentration camps. Now that this ATT has been passed into UN legislation, it should theoretically prevent other nations from trading in conventional arms with North Korea, due to their almost certain use in human rights abuses.

When this is considered the states motivations in vetoing the proposal become much clearer, particularly in light of its recent militarisation. Syria, is another nation with an extremely poor human rights record, and is currently involved in a violent civil war. As with North Korea, the Assad Regime in Syria, would not be able to trade arms with other UN nations such as Russia, from whom it buys many of its weapons, and would face heavy losses as a result. The Syrian government stands accused of numerous crimes against humanity, including the executions of children and hospital patients, as well as indiscriminately shelling the civilian population. The severe impacts that this Arms Trade Treaty will hopefully have upon these two nations, along with many others accused of human rights violations, clearly illustrate the importance of obtaining further regulations on the global trade in conventional arms.

As seen in Syria, guns are being used by various regimes across the globe to commit human rights abuses against the most vulnerable groups. This is why working towards an end to the illegitimate trade in arms, along with an amelioration of human rights abuses is so necessary. The prevention of these guns sales through the new ATT will help bring stability to many regions across the Middle East and Africa, which have seen weapons impact on those who are the most vulnerable.

Pre-existing problems such as famine and water shortages are exacerbated by conflict, and those hit hardest by this are women and children. Many can be left without any form of income, and no means of supporting their children along with other threats synonymous with armed conflict, such as rape and violence. The introduction of tighter controls on the global arms trade is paramount to preventing violence against women and children.

The British representative at the UN conference gave the treaty full support and called for it to include a wider range of weapons, along with a separate bill on human rights to be provisioned to ensure that this ATT remained strong. In addition to this, William Hague, the British Foreign Secretary commented that it was a historic day and a major achievement for the UN. The export of arms presents a major source of income for the United Kingdom, in 2010, sale of arms to the Middle East alone netted a profit of £395 million. The levels of support to the treaty given by the UK are made more promising when the ostensible economic losses faced by Britain in supporting the ATT are considered, as it shows a real level of commitment to making improvement.

Exclusion of Explosives and Drones

The treaty has drawn some criticism, with Anna Macdonald, the head of arms control at Oxfam, claiming that the scope of the treaty is too narrow. Other kinds of weapons such as; explosives, helicopters and unmanned drones will remain legal to trade within the treaties current parameters. She instead called for an agreement which would see large scale disarmament in order to make an active difference to those suffering in Mali, Syria, and many other nations.

Opening Doors for a Black Market in Arms Deals?

Others have questioned how effective UN sanctions can be in actively stopping the trade in arms for human rights abuses. It is arguable that now trading these weapons openly is illegal, the sales will merely become more clandestine. It has also been argued that lobbying by pro-weapons groups, such as the NRA in the United States has seen the treaty watered down throughout negotiations.

Despite the enthusiasm of John Kerry, the US secretary of state, who claimed the treaty was ‘strong, effective and implementable’, the USA has been accused of ‘dragging its feet’ over the issue of an ATT, considering the importance of arms exports to the nations economy. These criticisms come at a time when President Obama’s domestic policy is focussed on seeing tighter gun control laws passed, presenting a somewhat hypocritical stance for the United State’s international position.

There is also concern amongst many regarding the 23 nations which chose to abstain, which include Russia and China. Russia has a long history of selling weaponry to the Assad regime in Syria, despite international condemnation, so whether the UN will be able to prevent this trade from continuing through sanctions remains a concern. China, is also a massive arms exporter, having supplied Sudan with both conventional arms, explosives and fighter bombers. The largest supply of which occurred at the height of the Dafur genocide. In addition to this, China is also North Korea’s largest trading partner and as with the Russo-Syrian trade, it remains to be seen if the ATT will be able to effectively stop Chinese exports.  However, the potential for expanding sanctions on the arms trade in future treaties, as well as the clear good that can be done, now that this treaty has passed in the UN, plainly illustrates the importance of instigating further regulation of the global arms trade.

Over all, the introduction of an Arms Trade Treaty is more necessary now than ever.

The number of refugees fleeing the war in Syria has recently reached the one million mark, along with human rights abuses occurring throughout the world being aided by the international weapons trade.

When the consideration to women and children in the treaty's preamble is taken into account, ‘Bearing in mind that civilians, particularly women and children, account for the vast majority of those adversely affected by armed conflict and armed violence’, it shows the need for further action to be taken against those who would harm those who are most vulnerable, and the international arms trade which facilitates their actions.