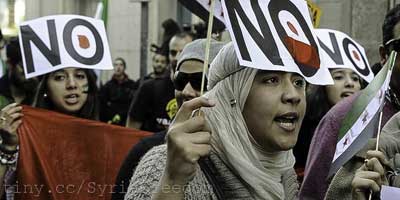 Recently, UK Foreign Secretary William Hague announced the UK was sending a team of experts to gather evidence on the use of rape and other forms of sexualised violence in the Syrian conflict. As media reports of the announcement tended to focus more on Angelina Jolie’s support for the move, the true significance of this has been lost somewhat.

In international law, rape is well established as a weapon of war and genocide. Sexualised violence is used in conflict to humiliate, punish and subjugate, to destroy the social cohesion of communities and even as a form of ethnic cleansing, through forced pregnancies. When the International Criminal Tribunal for the Former Yugoslavia (ICTY) was established in 1993, the inclusion of rape when prosecuting cases of crimes against humanity was considered revolutionary.

The prosecutions at the ICTY - and also at the International Criminal Tribunal for Rwanda (ICTR), set a major precedent in defining rape as an act of torture, a war crime, a crime against humanity and a tool of genocide.

However, further progress in terms of prosecution has been slow and disappointing. The number of prosecutions for such crimes does not come close to matching the thousands of women, men and children raped in both conflicts. An estimated 50,000 women were raped in Bosnia yet only 30 men have so far been held accountable.

Similar to the prosecution of rape in domestic courts, the issue usually lies with evidence or lack thereof. While the world is well aware of Bosnia's notorious 'rape camps', media reports do not stand up in international law. Cold hard facts and medical or documentary evidence are essential. As Elisabeth Neuffer notes in 'The Key to my Neighbour’s House', her excellent evaluation of the quest for justice in Bosnia and Rwanda, “Rape during war, however, presented tricky questions of proof. Except in the case of mutilation, it was unlikely that there was physical evidence to back up rape allegations in a trial,”

Before the ICTY, the only international criminal category in which rape was explicitly described was as a crime against humanity. This made it even more difficult to prosecute, as to qualify as a crime against humanity, it was necessary to demonstrate that the rapes were part of a systematic or widespread attack. There was much debate over whether or not rape can, in some cases, be used as a tool of genocide. In 1995 however the US Court of Appeals for the Second Circuit, in a case brought against Radovan Karadzic by Bosnian refugees had ruled that rape could be an act of genocide.

With this legal precedent set, the ICTY was able to include charges of sexual violence in the case against former Bosnia Serb leader, Dusko Tadic. It was the first international war crimes trial to do so. At the ICTR, the Akayesu trial was also a landmark case as it recognised that rape can constitute genocide under certain conditions.

When the International Criminal Court was established, the recognition its statutes gave to the crime of rape and other forms of sexual violence validated the important legal precedents set by the two ad-hoc international tribunals. Its trial of Jean-Pierre Bemba, former vice-president in the DRC, on charges of war crimes relating to the Central African Republic has been praised for placing rape and sexual violence at the centre of the charges. Despite this however, some women’s rights activists have expressed reservations about the real impact of this, pointing out that 40% of the charges of sexual violence were dropped before the trials commencement as judges argued they were ‘redundant’.

The UK and Syria

As vital as legal precedents are, real commitment by the International Community in terms of gathering evidence and prosecuting such crimes are just as important. Which is why the deployment of UK backed team of 70 people, including doctors, lawyers and forensic experts, to the Syrian region is so important. If the horrifying reports of brutal and widespread instances of sexualised violence can be verified, hopefully they can be stopped to some extent and later prosecuted.

It is difficult to be optimistic when one considers how widespread rape as a tool of conflict is across the world, showing no signs of abatement in places such as the Democratic Republic of Congo. However, just a few months ago, many questioned William Hague’s actual commitment to halting sexual violence in conflict, given the International Community’s track record. But we have now seen real and concrete action. Although there is much more needed to be done, it is a huge step forward in terms of stopping and deterring sexual violence in conflict.