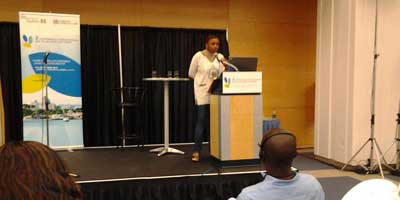 Zoneziwoh Mbondgulo speaks at the conference, on "the art of storytelling as a powerful tool to motivate, inspired and empower young people be Whistleblowers for Age-friendly policies, in third world nations, Cameroon in particular".

Avoiding the Unavoidable: The World is Ageing and it's Changing, too!

Ageing is not something one can postpone. It’s inescapable.

So, it's needless to say, we can't avoid the issue because we are all gradually ageing.

Like one Kenyan delegate told me last week at the 2nd International Conference on Ageing that was held in Quebec, Canada: “The ageing population is the fastest growing minority group”.

The conference took place on September 9 – 11 under the theme: “Living and Ageing Together in Our Community”.

Over 700 international and national delegates across 50 countries were present. With more than 100 talks and lecturers, including simultaneous sessions held – all geared towards “fostering dialogue and collaborative efforts in advancing Age-Friendly Cities (AFC) programs and policies; as well as showcase AFC initiatives by sharing knowledge, programs, best practices, and tools”.

Speakers at this conference came from diverse backgrounds – that is, from donor agencies to International/global networks working on ageing; Field researchers and /or academic institutions; national bodies, civil societies participants, government ministers and heads. Also present at the conference were young people, youth leaders, elderly rights activists, and individuals aged 60 years and older.

What Will the Future of Today's Young Women Look Like?

While at the conference, having listened to both analysts and grassroots advocates share their thoughts and concern about the rapidly change in population trend and structure, particularly in Africa – Cameroon inclusive on how, by 2050, persons aged 60 years or older, will surpass the population of children 14 years or younger, and thus the need for a joint thinking and recommendations for common good, I then asked myself series of questions:

When at present, we, young people, lack the power of self-determination and are still suffering from multi-dimensional forms of poverty? That is, the lack access to services, resources and facilities such as reliable and affordable healthcare, a good education, decent jobs, finance.

With women and girls still subjugated to ancient traditional practices, inequalities, discrimination and several forms of violence and abuse,

doesn’t that mean, if nothing is done now – we, women risk of getting into old age still facing inequalities, discrimination, violence, abuse, and poverty like most aged mothers now?

All the same, I won’t say that my pondering thoughts and worries went unanswered.

Recalling Prof. Alan’s keynote speech at the conference, emphasis was made on the need to effectively address active ageing.

This, he suggested that,

A Collective Responsibility to Become Age-friendly

In all, the conference was inspiring, engaging, motivating, and thought-provoking. There were also some tough debates between experts and participants present.

I gained so much inspiration from people working on AFC programs – especially those in Russia, Brownsville, Burkina Faso – how they started young with little or no skills and resources yet were able to sustain their initiative till date. Many of which I observed also started like the program I launched in Cameroon last year – MAKEMAMA VISIBLE Honorary Race to bring visibility to elderly mothers’ issues. Again, I was also inspired with some of ongoing researchers on AFC in Quebec, India, and Libya.

So far, I think my time spent at the 2nd International Conference on AFC in Quebec was fantastic – and being a young person and also a whistleblower on ageing and elderly rights, particularly elderly women – I found this conference super fascinating and inspiring.

And above all, motivating to continue in telling stories which inspire, motivate and empower young people serve as whistleblowers as well as to influence AFC programs and policies – part of which I discussed in my paper, where I captured and narrated three remarkable elderly grassroots women’s stories at the conference – all working for the good of the community, particularly young people’s well-being.

That notwithstanding, ageing issues remain a global problem.

Therefore, it is our collective responsibility to become age-friendly.

Women for a Change Cameroon

Empowerment Through Sport for the Mamas of Rural Cameroon