World must focus on younger girls to eradicate teen pregnancy 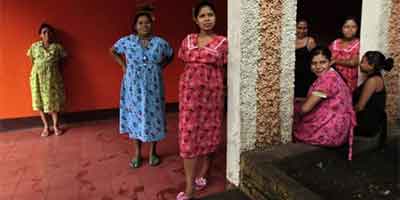 Governments and the international community need to rethink their efforts to tackle teenage pregnancy and improve their response to the specific needs of girls under 15, the most neglected and most at risk group, according to a new report.

In this year’s State of the World Population report, the United Nations Population Fund (UNFPA) said some 20,000 girls under the age of 18 give birth every day in developing countries, nine out of 10 in a marriage or union.

“It is the human right of a girl not to become pregnant as a child,” Dr. Laura Laski, head of sexual and reproductive health at UNFPA, told Thomson Reuters Foundation in a telephone interview from New York.

Teenage pregnancy perpetuates poverty and can put the health and life of teenage girls at risk, Laski said.

Every year, 7.3 million adolescent girls give birth in developing countries, 2 million of them under the age of 15, according to UNFPA.

The number of pregnancies is even higher and about 70,000 adolescents die every year in the developing world of childbirth-related causes - about 200 a day.

Even though most adolescent pregnancies occur in developing countries, the determinant factors are the same in both the developed and developing world, the report said.

Poor, uneducated girls from rural areas are more at risk of pregnancy than their wealthier urban counterparts and, despite a global commitment to end harmful cultural traditions such as child marriage, one in three girls in developing countries is married before she turns 18, the report said.

The report highlighted data which suggests that adolescent pregnancies are now less frequent in 54 developing countries, especially among girls under 15, though progress is slow.

But in some regions the number of girls giving birth is projected to rise.

Adolescent mothers are often powerless victims of a vicious cycle. They become pregnant because they are poor, uneducated and belong to communities where they are often forced into marriage and prevented from getting an education that would enable them to break the cycle.

In many cases, adolescent girls get pregnant because they have been sexually abused or coerced into having intercourse by their peers, community, sometimes their family.

The report called for a shift from targeted interventions to a more far-reaching strategy that “builds girls’ human capital, helps them make decisions about their lives and offers them real opportunities so that motherhood is not seen as their only destiny.”

Moreover, the needs and vulnerabilities of girls under 15 have not been understood and addressed by current policies and programmes to prevent early pregnancy, and there is no effective response to this challenge, the report said.

“The development movement has focused on child survival, and progress has been made in this area,” Laski said. “But there is not a plan for the 10 to 15 age group for girls and boys, and this age group is not being targeted and focused on to prevent pregnancy before it happens.”

The report says that Latin America and the Caribbean is the only region in the world to see an increase in the percentage of women experiencing at least one birth before the age of 15, according to surveys carried out between 1990 and 2008 and 1997 and 2011.

In Latin America, 18 percent of women aged 20 to 24 have given birth at least once before the age of 18 and these births are projected to rise over the next 17 years, the report said.

The highest percentage of women aged 20 to 24 reporting at least one birth before turning 18 in Latin America are found in Nicaragua at 28 percent, followed closely by Honduras and the Dominican Republic, the report said.

Teenagers in Latin America, particularly those in urban slums, are not getting the right and sufficient information about birth control methods and their reproductive rights, Laski said.

One in three adolescents in Central America did not know a girl could become pregnant the first time she had sex, the report said.

“Latin America is the only region in the world where the majority of pregnancies happen outside of marriage,” Laski said. “In other countries it happens within marriage, often child marriage.  In Latin America, in particular, an underlying cause of pregnancy in girls under 15 is related to forced sex and abuse (in the home).”

When a young teenager gets pregnant it also means they are less likely to finish high school, making it harder to get a job and break the cycle of poverty that many young mothers in Latin America and in other parts of the world face.

“Girls in pockets of high poverty drop out of school and then get pregnant and not the other way around as is usually thought. Because of the lack of opportunities and without prospects of getting employment, becoming mothers early on is what the community expects of them,” Laski said.

One key way of preventing teenage pregnancy is to ensure girls stay in school and do not drop out at an early age, while providing better and more widespread sex education in schools to young girls and boys and improving access to birth control methods.