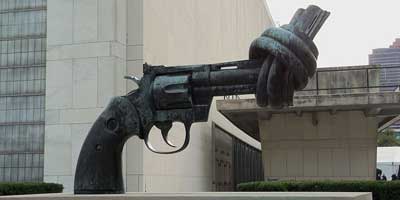 Domestic violence committed against women is a global issue, with up to 70% of women suffering some form of physical or sexual violence within their lifetime.

This a completely untenable statistic and one that is exacerbated by an increasing trade in small arms. In particular, ownership of guns or other weapons in a domestic setting, which allow men to exert an increased level of control and fear upon women. The chances of someone being murdered increase 41% when a gun is introduced into the home, whilst for women, within the context of domestic violence, the risk is increased by 272%.

Worldwide, for women aged 15-44, acts of violence cause more fatalities and disabilities than cancer and war combined, and anything that can be done to stop this kind of gruesome statistic should be openly embraced. Some recent progress has been made, with new UN arms trade treaties and international cooperation on human rights issues to try and bring an end to abuses.

Opposition Towards Restriction of Small Arms

However, there is still a large amount of opposition to legislation on this matter, with high profile examples including the US Congress' refusal to pass the International Violence Against Women Act and criticism of Clare’s law within the UK, which allows women to perform a background check on their partners to ensure they have no past history of violence.

Further resistance can be seen towards attempts to restrict the small arms which enable the practice of violence against women. Despite the gun massacres carried out in Colorado, Wisconsin, and Connecticut, the USA has failed to make any progress towards the implementation of legislation to regulate the sale of small arms despite the drastic and horrifying events which preceded the discussion.

This article will look at existing issues of domestic violence, gender inequality, and the contribution of small arms to these issues within three countries: the United States, the United Kingdom, and South Africa – all of which have largely different policies towards the use and sale of small arms.

South Africa has been declared the country with the world’s highest rate of domestic violence, with rates of murder and rape of women becoming increasingly prolific.

The South African Institute for Race Relations released figures suggesting 200,000 women were annually the victims of violence or sexual assault. There were even reports that rates of rape may be so high that by the age of 18, 30% of women had been raped, whilst 37% of men in Gauteng province admitted to having committed rape.

The shocking nature of these statistics has been, in part, put down to the ownership of small arms and the prevalence of gun culture in South Africa as proliferating a greater acceptance of this kind of violence.

South Africa is currently 17th for gun ownership in the world, and although there have been restrictions, the number of individuals with privately owned firearms remains high.

Increased controls and lobbying from groups such as Gun Free South Africa has seen rates of intimate partner murders drop from four women per day to three, but this statistic remains untenably high and could surely be reduced with tighter restrictions on guns.

High profile cases such as the murder of Reeva Steenkamp in an act of domestic violence by Oscar Pistorius in February have done little to reduce incidents of violence or encourage change amongst many South Africans, where despite a domestic violence act introduced five years ago rates remain the highest in the world.

One thing that could be done is to restrict access to both guns and other weapons such as machetes which are used to terrorise women. The Fire Arms Protection Act 2000 allows for the removal of weapons from men reported as having a history of violence, but it remains widely unknown and as such has had little effect on rates of domestic violence involving firearms.

Other key issues include the high ownership of other weapons such as machetes and knives – alongside increasingly high numbers of people suffering from substance abuse issues within South Africa, all of which contribute to the high levels of domestic violence within the country.

The United States, whose failure to implement new policies to control small arms has been central to news broadcasts for the past year, also has severe issues with domestic violence.

Despite evidence that gun ownership and likelihood of injury to a spouse are clearly linked, there is still a deep seated issue within the US, as illustrated by the recent announcement that the Supreme Court will hear the case of James Castleman. The nature of this hearing is essentially to determine whether or not laws preventing individuals convicted of domestic assault from purchasing guns should be repealed.

The fact this case is being heard at all clearly illustrates an issue in attitudes and a lack of understanding related to the use of small arms in proliferating domestic violence.

Legislation in many states also demonstrates that the link between small arms and domestic violence is not fully understood or acted upon in the United States. Connecticut law allows police to remove any firearms from homes where an instance of violence is reported, but in a somewhat contrarian policy which requires that firearms be returned within seven days after removal.

The use of guns in the US in instances of domestic violence is an increasingly prolific issue; a Violence Policy Center review of 2011 FBI crime data found that 94 percent of female homicide victims were murdered by a male they knew, and 61 percent of those killers were a spouse or intimate acquaintance.

Although the levels of violent crimes and homicide have dropped over the past 40 years in the USA, rates of domestic partner murders haven’t changed, whilst statistics show that female intimate partners were more likely to be killed by a gun than any other weapon.

And though the rates of domestic homicides are less than that in South Africa, these incidents still claim the lives of 600 women a year in the US. Furthermore, the link between this statistic and gun violence is clear.

Small Arms in the United Kingdom

Of the three countries, the United Kingdom has the tightest control of guns. It is only legal to own long arms for the purpose of sport, but other weapons such as knives are still used as a means to control and abuse women.

Instances of domestic violence ending in the death of the victim are far fewer in the UK than the US or South Africa, which can partially be attributed to reduced gun ownership and higher levels of public awareness on the issues. However. other factors such as being from a low-income household or suffering from a disability have been shown to increase the likelihood of abuse in the UK.

Over 1 in 10 emergency calls in the UK is related to an instance of domestic violence, showing that although the risk of more serious injury or death is reduced, thousands of women are still victimised by their violent partners.

Though small arms are clearly a major global issue in amplifying instances of violence against women, it is clear from looking at the UK that many issues still remain and need to be addressed in addition to a reduction in gun ownership.

Overall, it is clear from the statistics and the different policies across the globe that small arms are a massive contributing factor to instances of domestic violence. Tighter controls on the sale of guns and other weapons would have a huge impact on efforts to prevent oppression and violence against women.

Other issues such as raising awareness and improved legislation to protect women will also be necessary in order to ensure a safer world for women.

Say No Unite - Violence against Women - Facts and Figures

Carlos Andrés Gómez  - Men: we can start a movement to stop violence against women

Telegraph - Clare's Law: is it just a sticking plaster on a far more serious problem?

BBC - The violence behind closed doors