Health and the gender-gap: The situation for women in the developing world in 2014 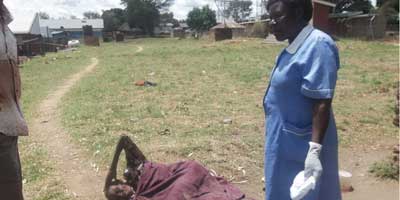 April 2014: AWARE Uganda Director, Sister Ajilong Margaret, attending to a member suffering from HIV/AIDS. The woman was found on the road side in Kaabong while on her way to hospital. She was assisted to hospital in time, where she received medical attention. In Kaabong, Karamoja, women struggle to access ARVs (antiretroviral drugs). AWARE Uganda provides HIV/AIDS home care giving services to help poor women to access medication, food, proper care and services. Photo: AWARE Uganda ©

2014 has been a year of major headlines in under-privileged countries in Africa, Asia, and South America. Amongst the most prominent of these has been the rise of militant Islamic Group IS, the devastating outbreak of epidemic Ebola in West Africa, and democratic protests in Central and South America. All of these social and political events impact different groups of society in different ways. In a context where the situation for women and children is, in several instances, dire, however, it is arguable that these are the groups impacted the most. The disadvantaged position women are in within many countries is nothing new, but it is true that there is a growing recognition of the issues women face in the developing world, and the importance of tackling these problems in order for the benefit of societies as a whole.

The WEF (World Economic Forum) has recently released its Global Gender Gap Report 2014, and gave Safeworld access to its findings before general publication. The document contains in-depth analysis of gender equality in terms of economic, social and political goals in countries across the globe:

“The Global Gender Gap Index was first published in 2006 with a view to creating a comprehensive gender parity index that is able to track gaps over time relative to an equality benchmark, thus providing information on a country’s progress relative to itself as well as to other countries...”

As the Safeworld team began to explore the report, it became apparent that a clear media focus has been placed on progress in women’s contribution to politics, national and international economies, and developments in equal pay for women. This economic perspective is hardly surprising, considering the particular standpoint of the WEF. There seems to be a growing sentiment within the international community that gender inequality in the workplace is an issue of key importance that urgently needs addressing.

One issue that not many seemed to have yet drawn from this report, however, is the health of women in the developing world, and how this relates to gender inequalities. Women’s health is an extremely broad subject encompassing a complex set of issues in developing countries, and progress (or the lack thereof) in this area needs to be analysed in light of countries’ particular cultural context.

Latin America and the Caribbean

“The Latin America and Caribbean region has closed 70% of its overall gender gap, with a steady improvement over the years.”

This statement is an encouraging sign for women in Central and South America, who face deeply-entrenched prejudices in everyday life. Gaining notoriety through Amnesty and other such campaigns, the plight of Beatrice, the young woman from El Salvador who was repeatedly denied an abortion, without which it was inevitable she would die, raised the profile of this type of struggle. This tragic story is a prime example of how cultural and religious attitudes impact women’s access to health care in countries who still hold traditional, and perhaps outdated, notions of women’s rights. A growing awareness of this plight, through the shock inspired internationally by stories such as Beatrice’s, can be viewed as part explanation for the improvement in this region more generally.

According to the WEF report, Central American country Nicaragua is at the top end of the spectrum of improvement for the region, having now apparently closed 79% of the gender gap. Considering the country’s previously poor record for defending women’s medical rights, in regard to issues such as abortion similar to that of El Salvador, this figure is certainly promising.

Mexico and South American countries such as Paraguay are progressing slowly in terms of women’s rights, and remain low on the report’s list for the best countries for women. Despite the slow advance, governments and societies more generally seem to be increasingly recognising the importance of protecting female health:

The Middle East and North Africa

The Middle East is an ever-controversial area, facing complex and severe political conflicts. The continuing current of extremist ideology in the region has seen women facing a daily living hell, never-mind next-to-no political and economic opportunities. In 2014, the apparent explosion of militant group IS into dominance in areas suffering from political power vacuums, namely Syria and Iraq, have threatened to exacerbate the situation even further. Extremist attitudes towards women go beyond indifference; they resemble outright contempt for women, leading to greatly restricted access to the basic requirements of life such as healthcare. In particular, reproductive rights and sexual health conflict with extreme Islamic ideology, and as such access to resources in these areas is extremely difficult.

“By 2014, no country from the region has closed its Educational Attainment gender gap or its Health and Survival gender gap.”

Unsurprisingly, the conflict in Syria has impacted life expectancy negatively, demonstrating how political conflicts have an influence on the situation at the grassroots level.

Despite the ongoing and perhaps escalating injustices women in this region face, the report does suggest some positive developments:

It seems that Arabic nations such as Kuwait and Qatar have successfully contributed to closing the gender gap in terms of economic activity in 2014. As countries such as these becoming growing influences in the global economy, opportunities for women seem to be correlating to this. As women become increasingly respected as independent economic actors, the hope is their autonomy will afford them to be equally valued intrinsically, and result in equal access to healthcare.

This region is perhaps the one most associated with poverty-related health issues out of the whole document. Problems with corruption and disease epidemics have led to the common association of Sub-Saharan Africa with poor life expectancy. The international community is well-aware of the enormous issue of poverty in this part of the world however, and the tragic ramifications this has on all areas of life. Slow but significant improvements indicated in the report, such as above, indicate that healthcare for women is moving in a positive direction in this region.

“Angola and Zimbabwe are among the five best climbers on the Health and Survival subindex from 2006...”

Safeworld has a particular interest in women’s health in Africa. The work of our many field partners is making huge strides in this region. For example, Adepeju Jaiyeoba’s initiative with the Mothers’ Delivery Kits is saving the lives of countless mothers in rural Nigeria and AWARE Uganda, which provides health care and nutrition for women suffering from HIV/AIDS.

Nevertheless, education and economic participation in Nigeria remain low for women. The kidnapping of over 200 schoolgirls by extremist group Boko Haram shocked audiences around the world earlier this year, and shows the persistence of attitudes, albeit in a minority, viewing women as commodities.

Uganda has significantly dropped in rank and score due to a steep decline on the Health and Survival and Economic Participation indicators, particularly with regard to life expectancy and estimated earned income. This is despite the fact that Uganda is among the top 10 performers on the Labour Force Participation indicator.

In terms of the report’s Health and Survival subindex, countries like South Africa have closed 98% of its gender gap. Namibia, Botswana, Zimbabwe and Tanzania alike have all made large strides in improving women’s health in relation to men’s.

Asia and the Pacific

It appears that this region can best be described as being at either extreme when it comes to the gender gap:

“Thailand has closed its Health and Survival gender gap and ranks fourth on the Wage equality for similar work indicator.”

These statistics all show positive development in health equality, with women in these countries also gaining increasing opportunities to be more active socially, politically and economically.

Many countries in this region, however, are still devastated by poverty and natural disaster. Communities living in the wake of such devastation face a daily struggle for survival, with maternal and female health often taking the hardest blow.

Religious and social preconceptions about women’s role within society are still prevalent in many Asian countries, often creating an obstacle to access to equal healthcare. This perhaps goes some way to explaining the more negative results from the report:

“On the Health and Survival subindex, out of the nine countries with scores below average, three are from this region....On both the Sex ratio at birth and Health life expectancy indicators, five countries from the region are among the twenty lowest-performing countries....”

“India is below average on three subindexes: Economic Participation and Opportunity, Educational Attainment and Health and Survival. In fact, it is the second-lowest performing country on Health and Survival, just ahead of Armenia.”

“Brunei Darussalam ranks 126th on the Health and Survival subindex. This is mostly due to a very low score on the Healthy life expectancy indicator.”

The political regime in Brunei has made headlines this year with its plans to implement an extreme Islamic legal code. If fully implemented, it would make homosexuality, female adultery and even drinking alcohol crimes punishable by violence or even death. In regimes such as this, it hardly comes as a surprise that the gender gap is most visibly manifested in the life expectancy indicator. Maternal and sexual health are commonly denied to women in these situations, contributing to this problem.

Comments like this initially appear disturbing. However, this report in itself shows the attention being given globally to the disparity between men and women in all areas of society. Economic and political opportunities for women are improving the world over, which will ultimately echo into health, helping to close the gender gap for future generations.

“The impact of health on economic growth is also well documented. Studies have shown that a one-year increase in health expectancy could raise GDP by up to 4%.More spending on health significantly improves health outcomes, which in turn contribute to reducing poverty and improving overall growth. Similar to education, investing in health and specifically in maternal, newborn and child health has a multiplier effect… “

National issues will continue to impact women the most harshly in countries with long histories of gender inequality. Reports done by internationally-respected organisations such as the WEF, however, make the reality of the situation on the ground for women in the developing world accessible to everyone. And so, as long as gender inequality exists, campaigns calling for equal opportunities and rights for women will continue to spread and grow in momentum. The findings from this report demonstrate that positive change is made, however small, even in those countries which seem to be the most bleak places to be a woman. This is perhaps the most important message of all to be drawn from this.

It is yet to be seen whether improved education and political representation have direct consequences on women’s health. It seems likely, nonetheless, that as women’s issues are given greater priority, women in developing countries will voice demands for equality in this area. This report suggests that health inequality is still present in countries which have seen significant improvements in other areas, and so perhaps this is an area in which development comes later. It seems inevitable, though, that once women are respected participants in society in the developing world, equality in healthcare will follow.

“A lack of access to safe abortion is torture”

Challenges to Women's Health in the USA Continue - by Jennifer Timmons. May 2014