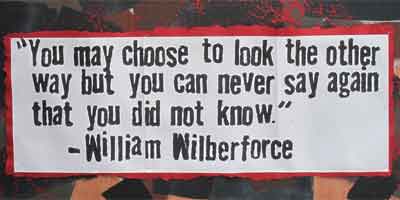 Image source: By Their Strange Fruit

Imagine. You are fleeing one country to pursue the basic human rights and a life free of persecution to which we are all entitled. You manage to cross the border and take refuge under the auspices of the local United Nations staff (if you are lucky).

You attempt to establish a day-to-day routine including providing your services to any area of employment that will take you. Struggling to adapt, the desire for a better life draws you to the idea of employing a people smuggler, desperation preventing you from utilising other avenues. Although you don’t have large amount of money, you borrow money from your family with the condition of paying it back once you safely reach your final destination and begin to set up your new life.

The problem arises when you are blindfolded and sold to kidnappers – with your future now tentative.

This journey was heard in variations through the testimonies I took while working with survivors of human trafficking and torture. The industry of human trafficking has become of increasing significance. Although this thought process does not encapsulate everyone, the desperation remains an element that existed regardless of gender.

The gender narrative when taking testimony is often a turning point in an individuals’ experience. Human trafficking through a gender lens provides a multi-platform for analysis. Although there is no standard ‘female experience’, it is clear that there is a higher likelihood of females experiencing forced domestic work and sexual exploitation, in contrast to men who are more likely to be forced into physically enduring work as evident in the construction sector.

The United Nations (UN) Protocol to Prevent, Suppress and Punish Trafficking in Persons defines trafficking in persons as:

‘the recruitment, transportation, transfer, harbouring or receipt of persons, by means of the threat or use of force or other forms of coercion, of abduction, of fraud, of deception, of the abuse of power or of a position of vulnerability or of the giving or receiving of payments or benefits to achieve the consent of a person having consent of a person having control over another person, for the purpose of exploitation. Exploitation shall include the prostitution of others, sexual exploitation, forced labour, slavery or similar practices, removal of organs or other types of exploitation.’

While the majority of testimonies I took were male, they often spoke about their concern for the women that were also trafficked alongside them. Currently, human trafficking through a gender lens is not an academic focus; however, the increased emergence of human trafficking has pushed the issue to the forefront with significant interest in human trafficking patterns and variations in experience according to gender, nationality and religion.

Despite there being multiple ways in which an individual can end up becoming a victim of human trafficking, this is mainly seen in two scenarios: Firstly, an individual’s decision to flee persecution by hiring a people smuggler who then sells him/her in an attempt to maximise the potential profit and; in the case of women who exist only through a male guardian who controls her income, identification, freedom of movement and physical well-being.

I recall sitting down with a young man who was explaining the role of female victims of human trafficking. “They cleaned our wounds and helped us plan our escape” he said.

There have been many horrific stories about individuals recounting vast experiences with torture from having melted plastic dripped on their back to restrict the movement of one’s spine, the removal of fingernails and repeated rapes.

Human trafficking has indeed flourished into a cruel beast offering opportunity for prosperity, while being fed by an extensive number of gendered vulnerabilities determined as a result of political, economic, and development processes.

The Stigma of Sexual and Gender-based Violence

In the case of human trafficking in Sinai particularly in relation to women, there are extensive stories reporting sexual and gender-based violence.

The stigma of reporting such violence remains a taboo and has sadly seen the further marginalisation and exacerbation of survivor’s guilt. Sexual gender-based violence in the context of human trafficking remains widespread, and due to the industry’s success, is likely to increase from here on in. As such, it is evident that more attention is needed to focus not only on the numerous patterns of trafficking, but also as a tool to design better survivor and re-integration services for those in need.

Additionally, the need to better understand the gender narratives is an essential part of devising strategies that, in turn will assist in the prevention of the industry’s expansion and further exploitation of gender-derived vulnerabilities.