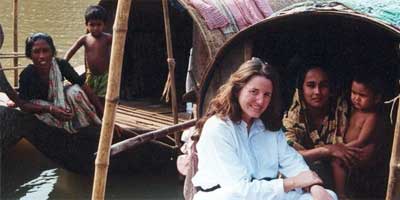 You’ve talked about how in recent years, you realized it was something from your childhood that lead you to this work. But was there a defining moment where you moved from journalism to documentary-making?

What led to you wanting to make this transition into raising awareness of, and direct action against modern day slavery?

I started (my career) as a journalist but I wanted to reach a bigger audience.

In Japan I worked as a journalist reporting on social issues for a local magazine. I was working with many different people and told their varied stories over 13 years. Many of my friends in Los Angeles suggested I should make the move into films.

I heard about grants in both Spain and Cuba and I applied, then began studying film-making and media. Under the guidance of professors and through my studies, I viewed documentaries and film from all over the world – including Russia and Eastern Europe, after which I began to make short films.

I first encountered sex trafficking as a reporter in the Himalayas. I had actually gone there on a retreat, but began exploring and found myself talking with the victims of human trafficking in the region, which became the basis for the film.

A director actually got in touch with me and said they want to develop this into a longer documentary. I replied that was fine, but I wanted the job of doing it.

They were initially resistant, but I said they needed a woman to lead this and to talk to these women. A man could not do this; a man would not be accepted.

They eventually agreed, and this is how I started working on Tin Girls documentary.

The women that you interviewed and have worked with are very honest about their experiences. Can you tell us more about how you met individuals?

I traveled to Nepal and I had friends who worked in NGOs, and who knew other non-profit organizations in the area.

These groups worked closely with the women and communities, so I established connections through them.

It was a safer environment than doing this alone and it was easier to build up trust because they already trusted the NGOs.

How have these women inspired you? Are there particular survivors that have touched you?

The hard thing for these women is that, when they escape or are rescued, their suffering does not end.

Often when they return home and they are seen as tainted, dirty, and an embarrassment to their families.

Sometimes their families refuse to accept them back.

These women, though exploited and trafficked, are seen as unclean. They often get harassed, and some even return to their captors or the red light areas from where they escaped.

It’s like a Stockholm syndrome: they seek people who are like their families and need a place to belong. They are not accepted by their own communities.

There are also some girls that we never hear of again.

That’s why the Masala Project is so great. It gives women jobs, a life, and a way forward.

Many that have successfully integrated have become activists have begun NGOs. These are the ones who survive and make changes.

Your latest project is the SOS multimedia project. This time you’ve combined a documentary with a video game covering the same issues. This game enables choices to be made, and the world of slavery to be viewed through victim's eyes.

How did you arrive at the decision to use two different mediums to tackle human trafficking?

At first I was skeptical. But we wanted to reach young people, and gaming is a part of society.

I also learned that 40% of game players are actually women and I started thinking about trafficking and how we could use this medium to connect and educate.

I approached PBS and sent the idea to BAVC Producers Institute for New Media Technologies in San Francisco.

"This problem would not exist if we all opened up about this situation!"

PBS thought this would be too “old” for their pbskids.org demographic, but they were very interested for an older youth audience and in fact, Latino Public Broadcasting became the first funder.

The idea is the young people use the game to make choices. They see the slavery issues through the eyes of the individual going through it, and they get the opportunity to change the situation or let it continue.

It’s about education and raising awareness.

It is a fun way to educate and can used within the mobile technology people already have as well as in a teaching setting.

The really great thing is it gives young people the chance to be activists. To learn how they can really make a difference.

Whether it be choosing not to buy a chocolate bar because it was produced by slave labour or donating time. The thing it allows us to do is to be honest with the next generation, to raise awareness.

So many people have stories of exploitation or abuse, but we don’t talk about them as a society!

If we bring things out in the open we can drive change and teach future generations. It’s easy to talk about the traffickers, but when we point the fingers at them we need to point them at ourselves, too.

This problem would not exist if we all opened up about this situation!

Whether it’s laws around immigration, reform, or raised awareness, this happens because we do not give this enough focus. Raising awareness with young people and giving them a medium to do this allows our children to micro-volunteer.

When I have presented this in schools it is amazing how much young people already know about sexual trafficking, yet we need to show them how to make choices and to keep safe.

The multimedia SOS project does that.

We raise awareness with the documentary and teach young people how to effect change with the game. We even have a western example of how a young lady responds to a modeling ad and how this can lead to sexual exploitation.

Was it emotional for you to work so closely with survivors who had such tragic stories? How did it affect both you and them?

Working on the SOS documentary, I met many women and formed close relationships with them. It is often a difficult – as well as a healing process, for these women to share their stories.

Often we would go through a women’s story, be almost at completion, and then the individual would want to stop and not share their story with the world.

I had to respect their decision and be ethical. I embraced the people we worked with, who shared their stories and often we formed a friendship.

It was hard when they did not want to move forward, but I had to respect their decision and choice. Despite the amount of work and emotional investment I couldn’t tell these stories without their agreement.

When I began work with Virginia, it was really amazing. So many things had happened in her life and she was really honest with us. It even became a healing process for her.

She now works in an NGO and has really moved forward in life.

Though I have a background in journalism my career needs to be humanitarian.

It’s too easy to report on Hollywood or the lives of famous people. I feel driven to raise awareness, and help heal the wounds affecting so many women.

In the film I talk about my own experiences, and am keen for us all to be honest about what happening around the world and in our own lives.

The difference with this project is that it tells us, we can change this, but YOU have to start with YOU.

When will the project become available to the general public?

We are looking for funding to move the project forward. We have received seed-funding for both the documentary and the game. The documentary is in production and we are hoping to start production of a functional prototype of the game very soon.

To donate towards the cost of finishing the film, please go to: www.indiegogo.com/sands-of-silence