Youngbee Dale: Speaking Out For Those Who Can't 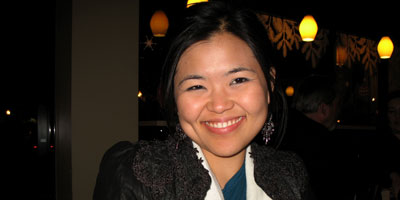 Youngbee Dale is a graduate from Regent University, where she has completed Master's degree in International Politics. She has co-contributed to the anti-human trafficking publication, "Setting the Captives Free" by Olivia McDonald in 2007.

She interned at World Bank in D.C. and worked for trafficking victims and migrant workers in South Korea. She is a Human Rights Examiner for Examiner.com.

What caused you to dedicate so much of your time to bringing awareness of human trafficking issues to the world?

Initially I was interested in migrant workers’ rights in Asian countries.  I quickly learned that human trafficking is an issue that is closely tied to this area.

Whilst working as an intern at the Gong Gam Public Law Office, a nonprofit group in South Korea, I had the opportunity to work with South Asian victims of human trafficking and international marriage.

I also translated many documents including “The NGO Report on Employment Law for Migrant Workers in South Korea" which was submitted to the International Labor Organization (ILO) in 2005.

This experience helped me to realise that my calling in life is to defend the rights of poor, particularly human trafficking victims.

Apart from the obvious, what aspects of Human Trafficking particularly interest you?

I had an opportunity to learn more about global human trafficking trends whilst contributing to a publication by Olivia McDonald "Setting the Captives Free: A Compilation of Essays for the Abolition of Slave Trade Worldwide”

As a co-contributor, I drafted the chapter "Banking and Human Trafficking," which explores the dynamics of financial crime in relation to trafficking.

Being involved in this publication also helped me realize that the problems relating to trafficking are greater than the issue of law enforcement alone. It not only involves human rights issues but also those of economics, politics, and culture.

Human trafficking is a much more serious evil in this world than the media presents.

How do you get your message out to the world?

I use social media in order to connect with my readers as it is the easiest way for people to be updated on daily news and other information on human trafficking.

I also generate a summary of news on human trafficking to inform readers of the issues happening around the world via a blog and various other websites who publish my articles.

Initially, my target audiences were experts in the field such as nonprofit workers, law enforcement officers, and other interested individuals.

This has since expanded to include students, housewives and others who are not involved with organisations in any way but who are also horrified by Human Trafficking issues.

Are you affiliated with any organisations?

I am not currently affiliated with any specific organization.

I am, however, in the process of obtaining nonprofit status to build a future organisation of my own.

Besides writing articles, are there any other activities you focus on to help support the victims?

The challenge that most non profit organisations face these days is a lack of funds from donors.

I am soon to have my first child and obviously cannot campaign on a large scale, nor do I have a lot of money to donate to support organisations, so I find other ways to help.

I conduct small fundraising events and donate 100% of money raised to specific organisations involved in helping victims of Human Trafficking.

I recently held a bake sale, charging 50 cents and 75 cents per muffin and made just under $50.  100% of this was donated to a charity in Virginia USA, Courtney's House, which offers victim assistance programs towards human trafficking victims from D.C. and Virginia.

I find that people are more inclined to listen to where the money is going to go when the victims are their neighbours.

Is there anything you would like to say to other people who want to do something to help, but don't know where to start?

If you have $32 to buy a goat or piglet in Nepal, you can save a child from being sold for sexual and labor exploitation for life.

So, what can you do to help trafficking victims?