Bahrain: 'My Father Forgave His Torturer' - Interview with Maryam Al-Khawaja 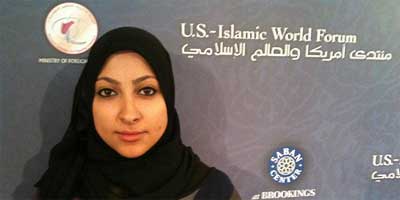 Born in exile in Syria and raised in Denmark until she was 14, Maryam Alkhawaja knows firsthand the hardships and sacrifices human rights activist face when opposing regimes with a history of human rights violations.  Her father, exiled from Bahrain under the previous King due to his work as a human rights activist, is currently in prison after being arrested, along with her brothers in law, during the ongoing crackdown on opponents of the regime.

Despite the hardships and sacrifices her family made to support the human rights cause, growing up in an environment with parents committed and passionate about human rights profoundly impacted Maryam.

“Growing up with parents who were completely committed to the human rights cause made a huge difference in my life,” said Maryam, “As a child, I picked up my parents’ passion for the field, and always dreamed of doing the same. I have been able to reach where I am today because I grew up around it.”

In 2002 when Maryam and her family returned to Bahrain, her enthusiasm and passion for the human rights cause slowly gave way to pessimism as she “saw that she was surrounded by mostly apathetic people who were not willing to change their realties.”  After spending a year studying at Brown University, Maryam returned to Bahrain and applied to a couple of teaching and public relations positions at universities.  She was called in for one interview and the interviewer asked her “isn’t it your father who’s continuously in and out of prison,” and when she replied yes, the interviewer said “I hope you don’t expect too many call backs.”

These circumstances brought Maryam back to work in the human rights field.  The reality Maryam knew¸ the reality of apathetic people unwilling to change their realities, was about to give way to an avalanche of activism and popular protest unseen during her earlier years in the Kingdom. Maryam, unable to find employment due to her family’s history in Bahrain, began volunteering for the Bahrain Council on Human Rights (BCHR).

Photo of father Abdulhadi Al-Khawaja taken during his hunger strike in prisonNow 24 and living in London, Maryam left Bahrain, at her father’s urging, when it became apparent she was under threat of arrest by the regime for her work with the BCHR.  At the time, Maryam worked as a correspondent reporting on the human rights violations by the regime to human rights organizations abroad during a crackdown on the opposition in 2010.  She is currently serving as the Vice President and Acting President of the BCHR while the President, Nabeel Rajab, who was recently sentenced to three years, is in prison.

Part of Maryam’s job is to interview victims of abuse and human rights violations in Bahrain. When she heard the news of her father’s arrest, the horrors and abuse he would face were already well known to her. Living safely in London, Maryam’s first thought upon hearing the news of her family members arrest was to return to her family,

“When I heard about how my father and two brothers-in-law were arrested my only thought was to go back to Bahrain,” said Maryam, “In a way I felt guilty for not being there, for not protecting my family.”

For Maryam, her ability to continue the fight despite the horror stories she hears derives in part from her parents’ example and resolve, and the people day in and day out “who continue to tread on their fear and take to the streets to demand human rights and dignity every night despite the risks.”

One of the many stories told to Maryam while interviewing political prisoners that significantly impacted her personally was about her father.

“One of the political prisoners being held in the same prison as my father said that after a very violent torture session my father was subjected to, my father said to the man who had just finished torturing him: ‘I forgive you."

* In February 2012 Maryam's father went on hunger strike. On April 5, his birthday, she wrote:

"My Father is Dying. This is the thought constantly running through my head."
"I constantly fear the phone call bearing the message that I will never see my father again. I cannot imagine a life without my father, and I cannot come to terms with a world that would allow my father to die." ...

According to Maryam, the populations around the region seeking to change their realities by taking to the streets and protesting their governments already achieved victory.

“The fact of the matter is there are people who have been working on achieving these movements for many, many years.

The fact that people broke the barrier of fear, that they took to the streets despite all risks, is the actual victory.”

In Bahrain, like many other countries in the region, the security apparatus of the state is responsible for much of the abuse and human rights violations despite reassurances from government officials in Bahrain that torture and killing of citizens is not government policy.  This is little comfort to the people who have been, or had a loved one tortured and killed by the security forces.

One of the largest challenges facing the movement if they are to succeed in ousting the government is dealing with a security apparatus known for its human rights violations. According to Maryam it is incredibly important to establish a process of transitional justice so victims and families can have a sense of justice being served.

One concern however, is ensuring the oppressed do not become oppressors themselves.

“Accountability within the international standards would be the way to go. Even those whom have committed the worst crimes against humanity have rights, and those rights must be respected,” said Maryam, “it is through being just to the weakest links of the country that a country can set the right basis for respecting human rights.”

With events taking place in Syria capturing the attention of the international community, it is harder to draw attention to the atrocities taking place in Bahrain and generate the needed political support to get the Security Council or any other organization to deal with the regime.  Like other countries in the region fighting against tyrannical regimes, according to Maryam, Bahraini citizens want to avoid military intervention by Western powers, but sanctions and other actions would be welcomed.

“The Bahraini regime is one of a few in the region that is sensitive to their international image and reputation,” said Maryam, “The reason why the human rights situation in Bahrain has been getting worse is because the regime in Bahrain now believe that they have international immunity.”

For Maryam, the struggle for international attention to the situation in Bahrain should not become a competition with other countries suffering at the hands of tyranny.

“This is not a competition or a race.  It is disastrous when people turn into numbers; they lose their value as human beings.  People struggling to achieve human rights and democracy should not be competing for international attention, it should come naturally.”