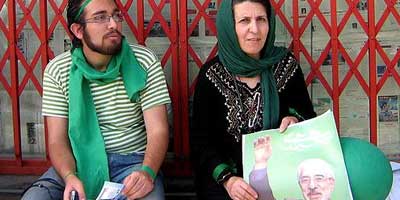 Two years after millions of Iranian's took to the streets to protest the re-election of President Ahmadinejad, the head of the judiciary, Sadegh Larijani, has formally announced that only one person was killed by government forces.

A statement which directly goes against evidence that the true figure for the number of casualties was over 70.

This recent announcement also comes despite the fact that many families of those killed in post election violence have filed official complaints with the judiciary.  And that some of the families have been promised Dieh or financial compensation for wrongful death by the judiciary.

Parvin Fahimi's son Sohrab Arabi, 19, disappeared on June 15th two years ago. It tok her 26 days to find out that he had been shot during a peaceful protest march.

She has become the voice of other mothers mourning loved ones who died during the unrest.

Parvin Fahimi: After what happened to Sohrab, after 26 days of searching for my son, and I had gone to all legal government offices [to find him], after they showed me his corpse, and we held the burial services, I think it took about 7 to ten days for me to file a complaint.

I asked for justice, you [Sadegh Larijani, head of the Judiciary] who are the head of the judiciary, judge of all judges, and have to be the main person in charge of ensuring justice for us, meaning that you have to make sure that I as a mother obtain my rights, you still have not replied to my letter.

Now he says that one person has been killed?  So these people who have been killed, like my child, or Ashkan Sohrabi, or Ali Hassanpour, what about them?

What about all those who have died?  Who are they?  I’m truly pity those who claim to be Muslims and Islamic and who are supposed to ensure justice in this country.

Because our issue is an issue of justice, and right now in the case files [regarding the death of my son] they have written me a letter saying that I should come and get dieh [financial compensation for wrongful death]. What good is dieh to me?  Will it bring back my son?

My son died because of one vote.  He had done nothing wrong.  My child had gone out [to protests] where there were 3 or 4 million others [protesting]. In the end with the attack of their own forces, my child was killed.  Who is going to be accountable to me?

The head of the Judiciary, in the first instance, has to be accountable, which [in this case] here the law has not even been observed.

Q: Ms. Fahimi, can the Judiciary pay dieh without a justification? Especially given that the person who has shot and killed your son has not yet been identified?

Parvin Fahimi: They have accepted themselves. Meaning that this is the response they have provided me. These are the letters that they have sent me. The letters that I have received, the summons that I have received, even my child’s identity card [states his death as such], [there is] the letter of the coroner’s office which states that my child [died because] of gun shots,  they have even specified and written that [this gun] was from among 25 possible war weapons, you see?

What is a person to say?

Then the clear examples are those who have been shot and wounded and are in their homes.  How is it that they don’t want to accept that so many have been killed? Not even once have they come to see us to inquire about our problem [and what we are asking for]. Not to mention that I held a burial ceremony for my son and they came there and harassed and intimidated me.

I am not allowed to cry for my son at his graveside. I am truly sorry, in this [holy] month of Ramadan, in the nights of Qadr [in which the Quran appeared to Mohammad], where all those who are sinners, take refuge in god and ask for forgiveness, this is what these people [the authorities] do, because they want to make us angrier, they want to create more conflict.

I don’t know what else to say. I can only say that I am sorry for all these people who claim to be Muslims

The Mother Of Sohrab: In Iran, A Grieving Mother Who Refuses To Be Silent

'The Mother Of Sohrab'

Fahimi's outspokenness and courage has earned her the respect of many Iranians, who refer to her simply as "the mother of Sohrab."

She demands that those responsible for the killing of her son -- and others who died for opposing Ahmadinejad -- be brought to justice.

"How could they kill my child or the children of others? Just because of a [peaceful] protest?" she asks. "Just because these children protested and wanted their vote back, they deserved to be killed?"

Fahimi's son disappeared on June 15 -- three days after the contentious vote that resulted in Ahmadinejad being decisively reelected to a second term. She was told that Arabi had been detained but heard no word of his whereabouts until she was informed of his death nearly a month later, on July 11.

To this day, the 53-year-old Fahimi knows little about the circumstances surrounding her son's death.

"The only thing [the authorities] told my lawyer is that [my son] was shot from a distance of 3 to 15 meters," she says. "It's not clear whether he received treatment or whether he was taken to a hospital."

Fahimi was with Arabi the day he went missing. She and her son, both supporters of reformist presidential candidate Mir Hossein Musavi, took to the streets of the Iranian capital along with hundreds of thousands of other Iranians to protest what they believed was a stolen election.

They lost each other in the crowd. Fahimi returned home and waited for Arabi, but he never returned.

Fahimi went to Tehran's notorious Evin prison, where many of those detained in the postelection rallies were being held. She contacted different authorities in the hope of hearing word of her son but was never given a clear answer, only that he was in detention.

It was Arabi's brother who determined his fate, after identifying Arabi's picture among images of dozens of others who died during or after the postelection crackdown.

During Arabi's funeral, Fahimi vowed not to remain silent.

Despite pressure exerted by Iranian authorities on victims' families, Fahimi has kept her promise.

Through letters and meetings with authorities, she continues to tell her son's story. She participates in protests, including one during official Quds Day (Jerusalem Day) events on September 18, when tens of thousands of citizens in Tehran and other cities protested against Ahmadinejad.

Died For His Ideas

The name of her son has not been forgotten and is now shouted, among other rallying cries, by crowds voicing their anger with the Iranian government.

Fahimi tells RFE/RL that she believes her son did not die in vain. He died for his ideas, she says, and will always remain alive.

"Inshallah, the future belongs to us because people will never back down in the face of so much violence, repression, and injustice," she says.

According to opposition sources, 72 people were killed in the postelection unrest. The government puts the figure at about 30.

Every Saturday for the past four months, mourning mothers and others who share their pain have dressed in black and gathered for peaceful marches in a Tehran park.