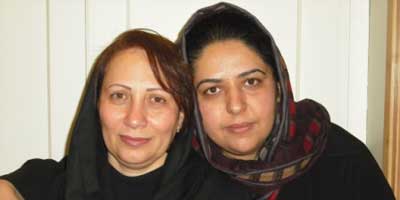 Mehrnoosh was arrested in November 2009 and spent 15 days in detention. Hayedeh spent three days in prison after her arrest on December 5. Both women were released from Isfahan Central Prison after posting heavy bails (approx $50,000 and $5,000, respectively).

They were initially charged with acting against national security through their membership with the campaign.

Hayedeh Tabesh had previously been barred from leaving the country after she received an invitation to an unspecified training event in South Africa (presumably for women's rights activism) and was summoned to the Intelligence Ministry for questioning in September 2009.

Mehrnoosh Etemadi and Hayedeh Tabesh, activists in the Campaign were released on Tuesday December 8, 2009 from the Central Prison of Isfahan.

These women’s rights activists were released despite the fact that a request for a temporary arrest was submitted in the case of Hayedeh Tabesh to the prosecutor, and in the case of Mehrnoosh Etemadi a request for changing the bail order to a temporary arrest order had been put forth to the prosecutor’s office. The deputy prosecutor at the Revolutionary Courts in Isfahan did not approve these requests and an order for the release of these women’s rights defenders was issued instead.

The charge against these two women’s rights activists is “action against national security through activism in the One Million Signatures Campaign and through carrying out activities intent on empowering women.” Six other activists have been charged with involvement in the Campaign, but have been acquitted on these charges. Mehrnoosh Etemadi explained to the site of the Change for Equality that: “despite all the hardships of being in prison and the ongoing interrogations by Security officials, the opportunity to meet female inmates, who in many respects are blatant examples of the various types of discrimination faced by women, was a valuable experience for me as a women’s rights activist.”

In this respect, Hayedeh Tabesh explained to c that: “the female inmates were very respectful toward us, and listened to our explanations about the Campaign and legal problems faced by women because of discrimination in the law with great interest.”

The Campaign activists in the provinces have faced arrest, threats, and interrogations on several occasions. After the arrest of Ronak Safazadeh and Hana Abdi, who faced charges of activities in the Campaign, among other charges, Zohreh Asadpour, Fereshteh Shirazi, Navid Mohebi, Zhina Moddaressi Gorji, and many other activists in the provinces have faced pressures, including arrest, interrogations and search of their homes. There have also been other pressures which have been indirect or not reported, such as threats, illegal summons, expulsion from employment and university as well as travel bans.

Sadighe Shalbafian is the mother of Mehrnoosh Etemadi an activist in the One Million Signatures Campaign.

Mehrnoosh was arrested on November 23, 2009 after security officials searched her home and seized property. While she has contacted her family by phone a few times, her status in prison and the charges against her remain unclear.

Could you please briefly describe the status of the case against Mehrnoosh?

On Monday November 23, 2009, at 8:00 am, Security officials who identified themselves as affiliated with the local office Ministry of Intelligence in Isfahan came to our home. T

They took some of these belongings with them, including Mehrnoosh’s computer and some of her personal writings. Needless to say, Mehrnoosh objected to this. On the afternoon of that same day, Mehrnoosh contacted us and said that we should go to the courts the next day. On Tuesday, the day following her arrest, a court hearing was held in Branch 11 of the Revolutionary Courts. After the court hearing we were informed that a temporary arrest order for the period of 24 hours had been issued in the case of my daughter. Of course this was not officially relayed to us.

Two days later, Mehrnoosh contacted us and informed us that a bail order in the amount of 50 Million Tomans (roughly $50,000) had been issued in her case. But when we went to the courts the next day to post bail, the investigative judge in branch 11 told us that while he had issued a bail order, he would not allow us to post bail, as their investigation had not yest come to a close. We went to the office of the Deputy Prosecutor, who told us that it was impossible to issue a bail order but not allow for the posting of bail. Officials at the prosecutor’s office told us that we must have misunderstood. So you see, we are still in this state of limbo and uncertainty.

How much contact have you had with Mehrnoosh since her arrest?

We have only spoken to her a few times. But it was obvious to us that those telephone conversations were monitored. The interrogator in charge of Mehrnoosh’s case informed us that we would be allowed to visit Mehrnoosh, and on one occasion he provided us with a letter stating such, but when we went to the prison, after several hours of waiting around, we were told that Mehrnoosh was not allowed visitors, as she was in interrogation.

At the same time, they have told us that we can visit Mehrnoosh on the regular visiting days specified by the prison authorities and we are hopeful that we will be able to see her then. We don’t even know for certain what the charges against Mehrnoosh are. I asked the security officer who had come to our house to arrest my daughter what the charges against her were. “Her activities in the Campaign,” was his only response.

Do you have any requests from court officials?

I just ask that they follow the law. I ask that they rescue me from this state of limbo and uncertainty. I ask that they allow us to post the bail order that Mehrnoosh has also signed. And I ask that they clearly announce to us what the charges against her are. Because we don’t have any reliable information about the situation of Mehrnoosh, it is natural that we be worried about her. My other request is that they allow Mehrnoosh’s lawyer to take on this case, so that the follow-up in the case against my daughter is carried out through legal channels and is official.

Are you aware of Mehrnoosh’s activities? Do you think that the treatment of Mehrnoosh by the authorities is in line with her social activities and deserved?

Yes, I am aware of Mehrnoosh’s social activities. Not only do I believe that her activities are legal, but I also believe that they are to the benefit of society. For years now, Mehrnoosh has been working on women’s issues, has been conducting research in this area and also conducting trainings. Not only are her demands with respect to women’s rights not illegal her approach in addressing these issues is also completely legal. I know that she has never broken the law.
What do you plan to do next?

We will go to the courts again and try to follow legal channels in an effort to resolve this issue. This is what the prosecutor has also told us we should do. It is the only thing that we can do. If for some reason we are not successful and don’t get our questions answered we will approach more senior officials within the Judiciary.