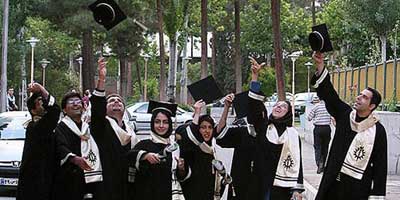 Source: Radio Zamaneh | Inside of Iran

Iran’s Assembly of Experts is calling on officials to institute gender segregation in Iranian universities.

Kamran Daneshjoo, Minister of Science and Technology announces: “Women’s Colleges will be established all across Iran.”

Kamran Daneshjoo told Fars news agency yesterday that “women’s colleges” will be established in every province, adding: “This is about keeping Islamic customs and limits, and the Islamization of universities will go much further than this.”

He said: “Prior to the Revolution (1979) there was one women-only university, which was renamed the Al-Zahra University after the Revolution. Thirty-two years after the victory of the Islamic Revolution, we do not have any other women-only colleges.”

Daneshjoo added that students have a “right” to gender-segregated universities, and establishing such colleges is his ministry’s top priority.

The Assembly of Experts convened on Thursday and agreed to call for the establishment of gender-segregated universities “to protect morality and guard the young generation.”

Two months ago, however, Mahmoud Ahmadinejad urged the ministry to stop working toward segregated universities and also called for a halt to the forced retirement of professors suspected of being too liberal.

Meanwhile, Health Minister Marzieh Dastjerdi has told reporters that medical schools teach both male and female anatomies; therefore, gender-segregation is not possible there.