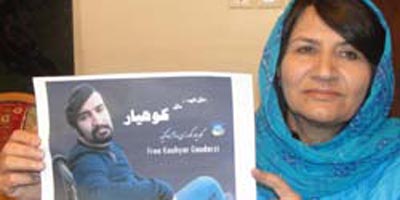 Fereshteh Shirazi, Iranian women’s rights activist and member of the One Million Signatures Campaign, has been denied face-to-face prison visits and telephone contact with her family only a week after her arrest.

Fereshteh Shirazi was arrested on September 3rd, after being summoned to the Amol Ministry of Intelligence. So far there has been no information made available on her charges or the reason behind her arrest.

In September 2009, the women’s rights activist was repeatedly summoned to the Amol Ministry of Intelligence and interrogated. Her house was also inspected by security agents.

Last Friday, Elham Mohseni, Fereshteh Shirazi’s 17-year-old daughter was arrested along with five other people for engaging in a playful water fight in a park in Amol. They were released on a total of [approximately] $10 thousand [USD] bail (10 million tomans) after spending one night in detention at the police detention center and two days in the Amol Central prison.

Fereshteh Shirazi a member of the One Million Signatures Campaign in the city of Amol was summoned to the local office of the ministry of intelligence on September 1, 2009.

In an interview to the site of Change for Equality, Fereshteh Shiriza explained:

Fereshteh Shirazi who was summoned for interrogation by the local office of the ministry of intelligence after her residence and her place of work were search on August 12 and 13 explained further that: “On Wednesday August 12 security officials arrived in my place of work which is a tailoring factory in five cars.

My daughter opened the door. I was not dressed in my hejab and wanted to close the door but one of them jammed the door with his foot and they pushed their way through anyway. I was shown a search warrant but none of the security officials present showed me identification.

Despite the fact that the search warrant only allowed for the search of my home, the security officers searched my place of work as well, and during the search they did not let my colleague, who was very terrified, leave her chair. After a while they told me I should go to my home. Two of the security officers stayed at my work, while the others went to my house. They searched all of the wardrobes and my daughter’s and son’s personal belonging. Finally they took my campaign pamphlets, personal notes, some CD’s, computer case and my telephone book.”

This campaign activist continued: “After my personal property was seized we returned to my place of employments, there the security officers insisted that I sign a piece of paper agreeing to go to the local office of the intelligence ministry. I explained that I would not sign anything until I had the chance to read it first. Finally, one of the security officers who employed a particularly harsh tone, showed me a piece of paper which included information on the charges against me, including actions against national security, publication of false information, inciting public opinion and relationship with foreign web sites and media. The paper had a court stamp on it. The day after that day, they called me and said that I need to wait for their call, before going in for interrogation.”

Shirazi further explained about the types of questions she was asked during interrogation and about the treatment she received from security officers. “One week after my house and place of work were searched, I was contacted by the local office of the ministry of intelligence and summoned for interrogation. The funny thing is that I went for interrogation with my son. I thought he would be asked to wait in another room, but the investigative judge told me that he could stay in the room with me, so that I would not be in the interrogation room alone with the court official. I was questioned about the Campaign and other issues such as writing in my weblog and about my friends in Amol. The interrogation questions were accompanied by threats which were repeated over and over again. At times my son was also questioned and he was told that your mother will go to court, and that he should think about finding a lawyer. The intrusive nature of the interrogation was upsetting. The interrogator even asked my son about the Baha’i faith.

He told me later that in those moments when he was threatened to be arrested his heart was beating hard and his legs were shaking.”

At the close of the interview with the site of Change for Equality, Fereshteh Shirazi explained that her computer case has since been returned. She was summoned on 1 September for the third time to the local office of the ministry of intelligence. According to Shirazi, despite the fact that she resisted being summoned by the phone, the security officials contacting her explained that they had been nice to her because of her illness and have refrained from asking about other issues. Still, the security officers contacting her explained that the questioning on September 1 would include questions about the Campaign.