Sarah Shourd: I Will Support the Freedom of All Political Prisoners in Iran 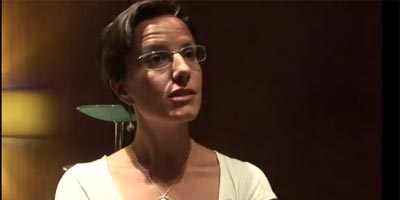 “I definitely support the freedom of all political prisoners and prisoners of conscience in Iran,” Sarah Shourd, one of three Americans who was arrested in Iran in July 2009 told the International Campaign for Human Rights in Iran in an exclusive interview right after the trio’s press conference this Sunday.

Josh Fattal and Shane Bauer were released from Evin prison in Tehran last week. Upon their arrival in New York they criticized Iran’s judicial process, the condition in Evin prison, and the mistreatment of other prisoners, whose screams they could hear from their cells.

“I can’t speak definitively about the other prisoners at Evin because I wasn’t allowed to mix with them,” responded Shourd when asked whether she had any interaction with other prisoners while she was in Evin prison adding that, “but I’ve since done my own research and looked into a lot of the cases and I see many egregious human rights abuses and in many ways it made me feel less alone.

"It made me feel that, in some way, Shane and Josh and I, not by choice or by design, but by fate were brought into a much larger struggle for human rights in Iran. And it’s something that we are very very happy to be able to openly support, now that all three of us are free.”

“So, I don’t believe we were given special treatment though I do consider us among the lucky ones now that we are truly free.”

The trio refused allegations made by the Iranian authorities of being involved in any espionage activity, saying that they were innocent from the beginning and that the Iranian judiciary or intelligence never provided any proof for their accusations.

“What Shane and Josh and I experienced with the Judiciary in Iran was a complete parody of justice. We were never allowed to meet privately with our lawyer. We were told again and again that we would go to court and it never came to pass, until 2 years after our detention. No evidence was ever presented against Shane and Josh and I because there is no evidence and we are completely innocent.”

And what is Sarah Shourd going to do now?

“Well, I definitely support the freedom of all political prisoners and prisoners of conscience in Iran.”