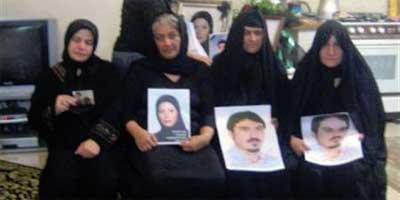 The Mothers of Laleh Park (previously known as the Mourning Mothers of Iran) -- a group of women whose children were killed or detained during Iran’s 2009 postelection crackdown -- have issued the names of seven members or supporters who have in recent months been sentenced to prison over their activism.

The group has come under pressure by the authorities over its silent public protests in Tehran’s Laleh Park and other locations and for bringing attention to the plight of political prisoners.

In a statement, the group says that while those behind the torture and the killing of activists are free to continue their crimes, women and mothers who have refused to be silent while fighting for their basic rights and defending the rights of their children are being repeatedly harassed and threatened.

​​The statement adds that the mothers and their supporters are being put on trial and convicted on “baseless” charges, including acting against national security.

RFE/RL reported last week on the jail sentence handed down to Parvin Mokhtare, the mother of human rights activist Kouhyar Goudarzi. Both mother and son have been in prison for the past five months.

The Mothers of Laleh Park reports that Jila Mahdavian, the mother of another young man who was arrested in 2009, has been sentenced to five years in prison, including a two-year suspended sentence.

Poet Jila Karamzadeh, who wrote a poem for the group, has been sentenced to four years in prison, two of which are suspended, according to the statement.

Mansoureh Behkish, Fatemeh Alvandi, and Nader Ahsani are the other members and supporters of the group who have been either, harassed, detained, or sentenced to jail.

In addition, a number of other relatives and mothers of prisoners of conscience have been interrogated, threatened, and detained, according to the statement.

“Which of our demands and actions have been illegal and threatened Iran’s national security?" the mothers ask in their statement. “[Iran’s rulers] consider national security the security of torturers, murderers, and thugs. Therefore, they have been terrorized by the actions of the mothers harassing and persecuting them in different ways.”

The Mothers of Laleh Park say they will stand by their call for the release of all political prisoners, the abolition of the death sentence, and putting on trial those who ordered the killings of intellectuals and prisoners of conscience in the past 30 years.

Jila Karamzadeh-Makvandi (f), a supporter of the “Mourning Mothers”, was arrested on 27 December 2011 at the Passport Department in capital Tehran and taken to Evin Prison to serve her two-year prison sentence.
Leila Seyfollahi (f) and Nader Ahsani (m), two other supporters of the Mourning Mothers, are also at risk of arbitrary arrest, as their prison sentences have been upheld. The three were arrested, together with several other supporters of the Mourning Mothers, in February 2010, and spent over a month in solitary detention before being released on bail. They were tried in February 2011 on charges of “assembly and collusion to commit crimes against the national security and propaganda against the state.” The court ruling accused them of involvement in establishment of “an illegal organisation against the national security, namely the Mourning Mothers” and claiming to be “human rights defenders.”

The Islamic Revolution Court initially sentenced Jila Karamzadeh-Makvandi and Leila Seyfollahi to four years in prison each and Nader Ahsani to two years imprisonment. It was reported in early November 2011 that the appeals court had sentenced Ms Karamzadeh-Makvandi and Ms Seyfollahi each to two years in prison as well as to two years suspended prison sentence, and had upheld Nader Ahsani’s two-year prison sentence.

Jila Mahdavian, and her daughter Maryam Najafi, two supporters of the Mourning Mothers, were summoned to the Islamic Revolution Court on 25 December 2011 and were notified that they had been sentenced to five years and 6 months in prison, respectively. Maryam Najafi also received an 18-month suspended prison sentence. They have 20 days to appeal their sentences.

The two had been arrested on 9 October 2010 and spent 50 days and 13 days in detention, respectively, before being released on bail. They were tried by the Islamic Revolution Court on 30 November 2011. Charges against Jila Mahdavian included “taking part in disturbances, acting against national security, membership of the Mourning Mothers, testifying in German courts against the Islamic Republic of Iran, and attempting to leave the country illegally.” Maryam Najafi was charged with “acting against the national security and attempting to leave the country illegally.” Ms. Mahdavian’s son Hessam Tarmassi was stabbed with poisonous knife after being released from 11 months of detention in 2009-2010 and is reportedly still ill.

Mansoureh Behkish, another supporter of the Mourning Mothers, stood trial at the Islamic Revolution Court on 25 December 2011 on charges of “propaganda against the system” and “assembly and collusion to undermine national security through establishment of the Mourning Mothers group.” She rejected all the charges. The court decision is pending.

Having lost six members of her family in the secret executions of the 1980s, she has been arrested several times during the past couple of decades. She was arrested on the street on 12 June 2011 and spent a month in solitary confinement before being released on bail.

Statement of the Mourning Mothers of Iran for International Women's Day