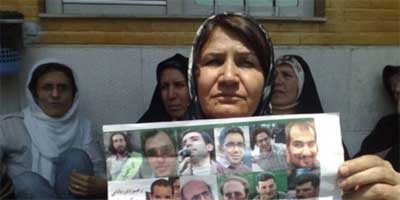 Parvin Mokhtare was just doing what any other mom would do when she took to the airwaves of Radio Farda (RFE/RL’s Persian-language service) to protest the arrest of her son, journalist and human rights activist Kouhyar Goudarzi, who has been imprisoned off and on by the Iranian government for years.

Mokhtare was her son’s fiercest advocate, conducting numerous interviews with media outlets in Iran and writing to human rights groups abroad to publicize her son’s case and secure his release.

Now an Iranian court has sentenced Mokhtare to 23 months in prison for her advocacy efforts, which judges said “[insulted] the martyrs and the Supreme Leader.” The decision was handed down in late December, some five months after Mokhtare was arrested by police as a consequence of interviews she gave to Radio Farda and others.

Mokhtare was denied the right to a lawyer during the trial.

“She constantly used to update Radio Farda about the situation of detainees and post-election detainees,” Radio Farda’s Mohammad Hossein Boghrati says. “She gave us interviews on how the officials were threatening the families of imprisoned activists.” The veteran Farda journalist adds that Mokhtare provided RFE/RL with “trustworthy info about the court process and judiciary system.”

Mokhtare is now serving time in a prison in Kerman, in southeast Iran. It’s believed that her son is being held in solitary confinement in Iran’s notorious Evin prison, alongside countless other political prisoners.

Despite the fact that journalists and human rights activists are routinely targeted and  imprisoned by Iranian authorities, legal action against family members is highly unusual, even for Iran’s revolutionary courts. Nevertheless, it isn’t unheard of for authorities to briefly jail family members for speaking up about their loved ones.

A case in point: Fatemeh Alvandi, another woman recently punished for fulfilling her maternal role.

Alvandi is the mother of Mehdi Mahmoudian, a journalist spending a five-year stretch in solitary confinement for his reports on the abuse and premature death of inmates at Iran’s Kahrizak prison. She was arrested January 2 after speaking out about her son’s ailing health during interviews with foreign-based media, including Radio Farda. Alvandi was released a few hours later with orders not to give any more interviews with the media.

Boghrati explains that there have been “numerous cases in which family members were detained, or even handed down a sentence for the purpose of intimidation.” But the Farda journalist stresses that Mokhtare’s 23-month sentence is a new extreme. “No one has actually been sent to prison for such a long time on such a charge.”