What do imprisoned mothers in Iran fear the most? ‘Being forgotten’ 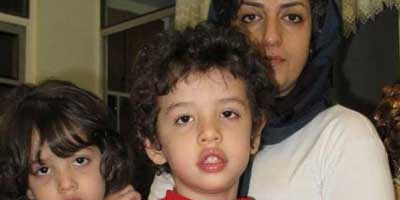 Article reproduced here with kind permission of the authors.

(WNN) Tehran, IRAN: Built in 1971 Evin prison, in Iran’s capital city of Tehran, is a place where incarceration for prisoners brings with it depression, frustration and isolation. Prisoners who are mothers often have a secret, but haunting fear of ‘being forgotten’ by the children they have left behind at home.

Imprisonment is not easy in Iran. It impacts women differently than it does men, where impunity can cause women to face increased fears of sexual advance, violence and intimidation in prison. Many women prisoners also have specific needs that relate to female health and psychological trauma. Prisoners who are also mothers have added needs because of worry about their children.

Worldwide the sentence for mothers in prison may, or may not, include their children being allowed to stay with them while they are incarcerated. In the Netherlands women prisoners may keep their children close during their detention, but until their child’s fourth birthday. But after this their children must find a place to stay outside the prison settings.

Afghanistan’s prison law allows children to stay in prison with their mothers up to the age of seven. In contrast, many women prisoners of conscience in Iran are not allowed to see or visit their children for weeks following their arrival in prison. If children and relatives are allowed, they may only come to see their mother on very limited visits.

In Cape Town, South Africa a new initiative to make mothers in prison and their children ‘child-friendly’ environments where children and mothers can be together in a natural and creative environment. The goal is to keep mother and child together and happy for at least two years.

With increasing women prisoners in Federal and State prisons, mothers are often sent to detention facilities that are too far away for their families to come visit them very often. Inside the U.S., an epidemic of mothers who have been incarcerated in private prisons because of their ‘illegal status’ as immigrants (most from Mexico or other regions in Latin America) are also causing children to be separated immediately from their mothers while they await deportation. Some mothers choose instead to wait for the U.S. government to process their legal plea against deportation.

In the middle of the night on June 9, 2010, thirty-nine-year-old human rights advocate Narges Mohammadi was taken away under arbitrary arrest by Iran security officials as they raided her home. The invasion came without a search warrant. Mohammadi was then taken away and placed in solitary confinement for three weeks. This prison confinement was broken only after Narges began suffering from a debilitating and mysterious condition which still plagues her. Today, even with hospital visits, she suffers from an undiagnosed ‘epilepsy-like’ disease that causes uncontrolled fainting, paralysis and injury.

A mother’s stress in prison can be overwhelming. “The rights of mothers and children to family life require special consideration,” says a handbook on good prison management by the International Centre for Prison Studies, which works with experts in human rights and prison reform. “Punishment [in prison] shall not include a total prohibition on family contact,” emphasizes the handbook. “In most societies women have primary responsibility for the family, particularly when there are children involved. This means that when a woman is sent to prison the consequences for the family which is left behind can be very significant,” added the report.

Mohammadi, as an incarcerated prisoner of conscience, was charged with “assembly and collusion against national security” in Iran as well as “propaganda activities against the Islamic Republic regime.” In preliminary court proceedings she was sentenced to eleven years in prison, a sentence that was reduced in February 2012 to six years in prison.

Today as a mother of twin children Narges is exceptionally vulnerable. So are her children.

Her son Ali, and his sister Kiani, are now six-years-old with a mother who has been an active in Iran’s human rights movement since her early days in college. Born in 1972, only one year after Evin prison was built in Tehran she later graduated with a degree in physics and engineering from Imam Khomeini International University located in the city of Qazvin, 175 miles northwest of Tehran.

For her work as an advocate, in 2009 Narges was honored in Bolzano, Italy with an Alexander Langer award, but she was unable to attend the ceremony due to a ban placed against her against travel made outside of Iran.

In her place, Iranian Nobel Peace Prize Laureate Shirin Ebadi accepted Narges’ award in Italy. “In recognition of her bravery in advocating for human rights, specifically in defense of the rights of students, women and other civil society activists” Mohammadi was honored with standing applause as she telephoned Ebadi during the event.

“If one day we realize the goals of Article 19 of the Universal Declaration on Human Rights, that will be a day of victory for human kind. If one day, humans can, without fear, insecurity, prison or death, express their beliefs and thoughts, and through peaceful means set out to publish those beliefs, authoritarianism will be undermined. But until that day, all those who hope for freedom will have a difficult road ahead,” added Narges in 2009.

In 2008, as a spokesperson and deputy head of Iran’s Defenders of Human Rights Center (DHRC), Mohammadi faced specific and increasing danger. She was later brought before the 4th Revolutionary Court in May 2009 as the result of her membership in the DHRC. After her defense and a $40,000 (USD) bond was made, Narges was then temporarily released from her charges, but the dangers for her as a women’s rights and human rights defender did not subside.

“I am a human being, a mother, a wife, how much more of this pain and suffering must I go through.”

– Narges Mohammadi,
Iran prisoner of conscience in a letter to Iranian government officials

The Defenders of Human Rights Center in Iran was formed through the combined efforts of five top Iranian human rights attorneys, including founding member and former judge Nobel Peace Prize Laureate Shirin Ebadi.  Created in part to monitor and provide pro-bono legal services, as well as represent cases where human rights protection under the law was at stake inside the region, the DHRC was threatened then completely closed-down by an Iran government office ‘lock-out’ in December 2008.

Narges Mohammadi’s sentence specifically mentions her “membership of the DHRC” as one of the ‘illegal charges’ that has put Narges in prison. A growing number of attorneys connected to the DHRC are also now in prison.

“…what hope is more powerful than the human chain across the world, where individuals from all corners of the world, act in solidarity to support one another,” said Mohammadi in response to her 2009 Alexander Langer award. “No longer can governments, with the excuse of national sovereignty, erect a wall around the peoples of their nations, and with the same excuse, treat their citizens as they please and view any voice of objection from around the world as an act of interference in their internal affairs.”

Elahe Amani is WNN special reporter on Iran, and works with immigrant women who are part of the South Asian, Iranian and the Middle Eastern ethnic communities in Southern California.
Elahe is the Chair of the Global Circles of the Women’s Intercultural Network.