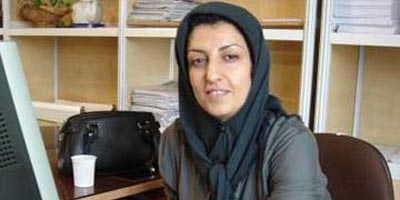 Jailed activist Nargess Mohammadi is suffering from deteriorating health in Zanjan Prison, according to her husband, Taghi Rahmani.

The International Campaign for Human Rights in Iran reports that human rights activist Mohammadi is in dire condition in jail.

Rahmani, the jailed activist’s husband who recently fled Iran and is currently residing in France, told the rights organization that last Saturday, when her family visited her in jail, Mohammadi’s face appeared bruised and she was suffering from a severe stutter.

She reported that while taking shower she had fainted and fallen to the ground, and no one but a cellmate came to help her up, and prison authorities gave her no medical attention. Rahmani maintained that Zanjan Prison is a very dangerous environment, and Mohammadi’s family was told of many altercations between inmates, which have probably increased Mohammadi’s stress levels.

Rahmani maintained that his wife has been transferred to Zanjan Prison from Evin Prison in Tehran in order to subject her to more pressure, even though her sentence does not stipulate that she has to serve her jail term in exile.

Nargess Mohmmadi was first arrested in 2010 and was released after suffering periodic attacks of muscular paralysis, and she remained under medical supervision for the condition long after her release.

She was handed an 11-year sentence by the preliminary court for the charges of “assembly and collusion against national security, membership in the Human Rights Defenders Centre and propaganda activities against the Islamic Republic.” Her sentence was later reduced to six years after an appeal.

She was arrested in April to serve out her sentence and was transferred from Evin Prison to Zanjan, which is reportedly a harsher environment.