Justice Delayed: The massacre of political prisoners in Iran 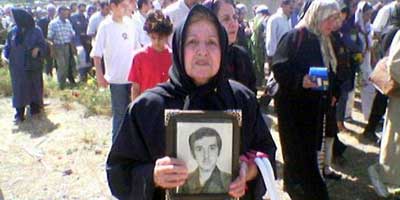 An Iranian mother holds the picture of her son who is part of ‘The Disappeared’ who vanished during the 1988 revolution in Iran. She stands at Khavaran, a mass grave cemetery south of Tehran where she feels her son’s remains lie. In 2009, advocates say that the Iranian government attempted to alter the graves by sending in bulldozers adding soil and trees to the site. Image: A witness in Khavaran

Article reproduced here with kind permission of the author.

(WNN) Tehran, IRAN: 1988 is a year that is remembered for large, militant protests against the 1988 World Bank and IMF meetings  in West Berlin. It was also the year “Mississippi Burning” and the “Rain Man” received Oscars and the music group Public Enemy garnered publicity by staging a concert at Riker’s Island prison for 250 inmates and 100 journalists. It was also the year that “The Alchemist” by Paulo Coelho, and “A Brief History of Time” by Stephen Hawking  were published. And a year that will be remembered for the end of the Iran–Iraq War, in which an estimated one million lives were lost and thousands of political prisoners were executed in Iran followed by dumping their bodies in a mass grave in the outskirt of Tehran.
Who were these prisoners in Iran?  What crimes did they commit? Why were they executed en masse?

The systematic execution of thousands of political prisoners across Iran by the government of Iran began on July 19, 1988, lasting about five months. A majority of the prisoners, men and women, were young political opponents to the Islamic Republic of Iran.  Many received their sentences, yet they were executed in masses in extreme secrecy.

Ervand Abrahamian, the renowned historian in “Tortured Confessions,” (1999), called the executions an “act of violence unprecedented in Iranian history — unprecedented in form, content, and intensity.” Amnesty International in its report, “Violations of Human Rights 1987 – 1990,” provides a glimpse into the scope of these executions.

In its report Amnesty states: “Another major aspect of the death penalty in Iran is its extensive use against political opponents. In contrast with criminal executions, which often take place in public and are usually announced in the official media, political executions are usually carried out in secret. For this reason the numbers of political executions which have taken place in Iran are disputed. Amnesty International has recorded the names of over 2,000 prisoners reported to have been the victims of a wave of secret political executions between July 1988 and January 1989. Amnesty International has no way of knowing the full extent of the massacre of political prisoners which took place during this six-month period. However, the organization has interviewed dozens of Iranians whose imprisoned relatives were killed at that time and has received written information about hundreds of other prisoners who were among the victims.”

At the time Amnesty International also spoke to eye-witnesses who were political prisoners in Iran while the mass killings were being carried out. Evidence has also emerged from Iranian government circles. In particular, letters written in July 1988 to Ayatollah Khomeini by Ayatollah Hossein Ali Montazeri, then the designated successor as leader of the Islamic Republic, referring to “thousands of executions in a few days” (Reuters, 29 March 1989).

The Ayatollah Montazeri is also reported to have said: “Many are the innocents and minor offenders who were executed following your last order” (Reuters, 29 March 1989). Taken together, Amnesty International believes that there is overwhelming evidence that in the latter part of 1988 the Iranian government carried out the largest wave of political executions.” Another document published by Amnesty International on the occasion of the 20th anniversary of the massacre in 2008, confirmed that “starting in August 1988 and continuing until shortly before the tenth anniversary of the Islamic revolution in February 1989, the Iranian authorities carried out massive wave of executions of political prisoners – the largest since those carried out in the first and second year after the Iranian revolution in 1979. In all between 4,500 and 5,000 prisoners are believed to have been killed, including women.”

While these systematic mass executions were carried out with great secrecy and the statesmen in power denied it happened, the operation was leaked by survivors, and at least one of the mass graves was accidentally found by an Armenian man passing by the area.

This burial site is now called “Khavaran.” Despite the fact that the shocking executions of political prisoners are now undeniable, those who were holding key government positions at the time remain silent; or continue to imply that it was in response to the violence instigated by the Mujahedeen in the western borders of Iran.

Despite all the obstacles to holding the Iranian government accountable for these crimes, seeking human rights justice has moved from the margin to the center of global awareness within the last 24 years, and many of the narratives and testimonies of Iranian political prisoners and their families have been recorded. The annual memorial conferences by Iranians in exile; the efforts of human rights organizations; and this summer’s International Tribunal for Iran – 1980s Massacre of Political Prisoners are all steps forward in fully understanding the scope, intensity and magnitude of the massacres in Iran during 1980s, and in particular in summer of 1988.

The word is now out about these political crimes.

Many survivors are daring to come forward now about one of the darkest human rights violations in Iranian history. According to Geoffery Robertson, a human rights lawyer, academic and author of “Crimes Against Humanity: The Struggle for Global Justice” who wrote a 146 page comprehensive report titled “Massacre of Political Prisoners in Iran 1988” and who also sat as an appeal judge at the United Nations said the UN reverted to silence in the case of the mass executions in Iran.

“The UN did not bother about Saddam Hussein’s use of poison gas at Halabja earlier that year, and it turned a deaf ear to Amnesty reports about the prison slaughter (Iranian diplomats claimed the deaths had occurred in battle). But there is no statute of limitations on prosecuting crimes against humanity, and the mass murder of prisoners already serving sentences for political protests must count as one of the gravest of unpunished crimes,” said Robertson in a June 2010 op-ed for The Guardian News.

If one searches “Massacre of political prisoners in Iran” in Google these are the results:

While the results of the search are not an exact measure, they reflect the fact that the world is becoming more aware of the mass execution of political prisoners in Iran.

Geoffery Robertson also stated in 2010 that: “Most of the judges and officials who implemented the fatwa are still in high office in Tehran – under a supreme leader who, when asked about killing prisoners replied: ‘Do you think we should have given them sweets?’ There is still time for the UN Security Council to enforce international law by setting up a court to try the perpetrators of the prison massacres. This may be a better way to deal with a theocracy whose behavior in 1988 provides the best reason for concern over its future behavior with nuclear weapons.”

Knowledge about these crimes against the very soul of humanity requires the global community to hold the government of Iran accountable for these crimes.

Justice will not be served until all those who orchestrated one of the most appalling human rights violations in Iranian history are brought to justice. It is only then that the families of the victims may have closure and begin to heal the wounds of their loss.  As Bertrand Russell said in the opening of the Vietnam War Crimes Tribunal on November 13, 1966, “May this Tribunal prevent the crime of silence.”

While justice has been delayed for 24 years many feel as though impunity has won, history tells us otherwise.  ”Crimes against humanity,” first defined at Nuremberg, is a phrase that has become the key to unlocking the closed door of state sovereignty, enabling all of us in the international human rights community to bring tyrants and torturers to heel.

As in the case of Argentina and Chile, we must continue to hold those who ordered and those who carried out the orders for these crimes responsible and accountable for their human rights violations.

Accountability provides justice for victims, and also helps to ensure that past atrocities and political crimes are not repeated.