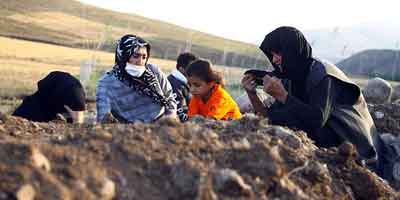 Mother sings a lullaby at the grave of her 5 year-old son, lost in the earthquake. ©

On 11th August, 2012 a series of powerful earthquakes struck the East Azerbaijan province in northwestern Iran. Although over 90 percent of the country falls within an active seismic zoneand therefore experiences earthquakes on a regular, near-daily basis, the August earthquakes were particularly devastating.

Hakimeh, 11 yeas old, lost her father in the earthquake. ©The death toll, as reported by official government sources, is over 300 and over 2,000 were reported injured. That those numbers have not been updated since several days after the quake, coupled with the initial denial of international aid, has led activists to criticize and question official accounts of the destruction.

In response to the denial [by the Iranian regime] of international aid, Iranian activists and ordinary citizens took it upon themselves to travel to the region to distribute aid, support and also to document the destruction.

The reformist publication, Kalameh, reported on August 23rd that there was a mass arrest of 35 activists for attempting to distribute aid directly to earthquake victims, instead of through sanctioned channels, which entrust monetary and physical donations to the Iranian Revolutionary Guard Corps (IRGC) and Iranian Red Crescent, which have a dubious legacy of aid distribution.

Ten of the activists were later released on bail but the rest were transferred to the Central Prison of Tabriz, the capital of the province.

There are additional reports that some have since been taken from that prison by Intelligence Ministry official, and their whereabouts and condition remain unknown.

Despite the danger, including that of aftershocks and additional small quakes that continue to be felt in the region, Iranians remain dedicated to telling the stories of the quake victims.

In response to public pressure and the opening of international aid channels, the U.S. Treasury Department issued a general license to NGOs, allowing them to collect and distribute donations despite U.S. sanctions.

In view of the ongoing impact of the devastation, the licence has recently been extended to November 19th 2012.

New York Times: Young Iranians Step Up With Their Own Quake Relief

persiabanoo: No News From Activists Arrested In The Earthquake Aid Workers’ Camp In Azarbaijan

U.S. Dept of the Treasury: Release of Iranian General License C-1 - Funds Transfers Related to Earthquake Relief Efforts, To or For the Benefit of Persons in Iran, Authorized until November 19, 2012