We must stop an inhuman penalty against women: Iran’s execution by stoning 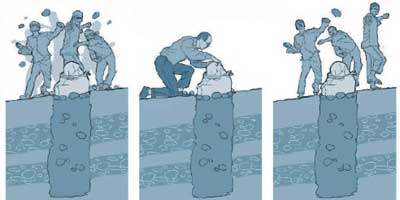 In March 2013 Elahe Amani spoke on panel and gave this presentation at the 57th United Nations conference, the UN Commission on the Status of Women:

(WNN) While the death penalty itself is being eradicated in many countries around the world, the most brutal form of the death penalty—stoning—is still being practiced. Death by stoning has been practiced since the establishment of the IRI – Islamic Republic of Iran – in the region where I was born before stoning was part of the ‘official’ government policy.

While 90 percent of the countries of the world are not executing and 100 countries have completely abolished it, Iran leads the world in number of executions per capita among nations that continue to apply the death penalty in their domestic jurisdictions.

Many of these executions are conducted in secret and go unreported by official sources.  According to reports from human rights groups that document executions in Iran from both official and unofficial sources,  Iran is second only to China in annual death penalty sentences.  Since 1979 Amnesty International has documented at least 77 cases of stoning in the Islamic Republic of Iran, and this figure is likely low due to the lack of proper documentation through 1979-1984.

The first reported case of stoning was shortly after the revolution in July 1980.  Four women were sentenced to death by stoning based on the suspicion of adultery. I recall when I shared the news with my great aunt (may she rest in Peace), a devoted Muslim and a woman of faith in Kerman, she immediately responded “this is not Islam.”  The fact is that stoning was used only as a form of death penalty by the IRI.  While there are records of various forms of human rights abuse and discrimination of women in the 20th century history of Iran, there are no records of stoning in Iran prior to the July 1980 stoning.  Prior to this event neither adultery, nor any other crime for that matter, ever warranted stoning.  This is why we are calling ‘here and now’ that stoning should not be made in our name, nor in our culture.

Perhaps what is most harrowing is that the Penal Code of Iran specifies the manner of stoning executions and types of stones that should be used. Article 102 of Iran’s Penal Code states that men will be buried up to their waists and women up to their breasts for the purpose of execution by stoning.

Article 104 states, with reference to the penalty for adultery, that the stones used should “not be large enough to kill the person by one or two strikes; nor should they be so small that they could not be defined as stones.”

This makes it clear that the purpose of stoning is to inflict as much pain as possible in a process leading to a ‘slow death’.

The cruel practice of stoning started with the four women in Kerman. Since then the majority of those sentenced to death by stoning have been women.  Women suffer disproportionately from such punishment.  One reason is that they are not treated equally before the law and courts, in clear violation of international fair trial standards. They are particularly vulnerable to unfair trials because they are more likely than men to be illiterate and therefore more likely to sign confessions to crimes they did not commit. Discrimination against women in other aspects of their lives also leaves them more susceptible to conviction for adultery.

In 2002 the IRI announced  a moratorium on execution by stoning. Since then officials have routinely denied that stoning sentences continued to be implemented in Iran. For example, in 2005, judiciary spokesman Jamal Karimirad stated, “in the Islamic Republic, we do not see such punishments being carried out,” He further added that if stoning sentences were passed by lower courts they were overruled by higher courts and that “no such verdicts have been carried out.”

In spite of this, deaths by stoning continued to be reported. Ja’far Kiani was stoned to death on July 5, 2007 in a village near Takestan in Qazvin province. He had been convicted of committing adultery with Mokarrameh Ebrahimi with whom he had two children and who was also sentenced to death by stoning.  It was the first officially confirmed stoning since the moratorium in 2002, although a woman and a man are known to have been stoned to death in Mashhad in May 2006.

The stoning was carried out despite a stay of execution ordered in the case and in defiance of the 2002 moratorium.

In 2008, for the second time, Iran’s judiciary announced that the punishment of stoning convicts to death had been removed in the draft legislation submitted to Iran’s parliament for approval.

Judiciary spokesman Ali Reza Jamshidi then announced that, “In the latest version of the Islamic penal codes bill, which has undergone several modifications, such punishments are not mentioned.”

While the last case of reported stoning of a women was ‘Mahboubeh M’ on May 7, 2006, even after the second announcement in 2008 of the moratorium on the practice of stoning, multiple cases of stoning have been documented.  Deutsche Welle news reported the stoning of a man in Rasht in March 2009. Another case of stoning was also reported in May 2009.

On March 6, 2012 Dr. Ahmed Shaheed, the UN Special Rapporteur on the situation of human rights in the Islamic Republic of Iran (IRI), reported on the IRI to the General Assembly of the United Nations:

“A number of individuals have been sentenced to death in recent years by stoning despite announcements of a moratorium on stoning as a form of capital punishment by the judiciary. In its report on the subject, Amnesty International stated that at least 15 men and women are currently facing death by stoning sentences for ‘adultery while married’. The Special Rapporteur joins the Human Rights Committee in expressing its concern about the use of stoning as a method of execution maintains that adultery does not constitute a serious crime by international standards; and strongly urges the Government to enforce its moratorium on stoning. The Special Rapporteur welcomes the fact that stoning has now been omitted from the new Penal Code and hopes all existing cases will be reviewed to ensure that such penalties are not carried out.”

There are several concerns regarding the claim of omission of stoning from the Penal Code causing the UN Special Rapporteur assigned to Iran to express a real concern: stoning can still be issued at a judge’s discretion in accordance with Sharia Law or via a fatwas.

It is also correct that, in comparison to the previous versions of the Penal Code, stoning has been removed from the section of the Code dealing with penalties for adultery. But the word ‘stoning’ appears twice in Articles 172 and 198 of the new Penal Code. Although details about its implementation, such as the appropriate size of stones to be used; wrapping the convicted person in a white shroud (kafan); and burying the male adulterer in the soil up his waist and a female up to her shoulders, are all gone.

The omission of the implementation process continues to be a serious area of concern. The fact remains that that sexual relations outside of marriage is still a crime in Iran.

The high-profile case of Sakineh Mohammadi Ashtiani and other victims of stoning have brought shame on the status of human rights in Iran.

In light of the political fog created by Islamic Conservatives; the current political climate; and the government’ s past history of false moratoriums on stoning, the global community should not be too quick to cheer the changes in Iran’s Penal Code. Whether or not the new Penal Code is truly implemented and the practice of stoning eliminated is yet to be seen.

As I shared in the briefing statement at the 20th Session of the United Nations Human Rights Council on July 6, 2012 in Geneva, Switzerland, “Honor crimes, FGM and stoning are often described as ‘tradition’ and an unchanging facet of ‘culture’.  While all these inhuman and cruel practices that violate the rights of women to life, integrity and dignity, have a cultural dimension, they are also shaped by social factors, UN resolutions, government policies, and institutional discourse can provide an encouraging environment for eradicating such inhuman and cruel practices.”

A resolution of the UN Commission on the Status of Women which bans stoning—one of the cruelest forms of the death penalty and a clear form of torture—would be a pivotal moment in the fight to bring an end to this practice.

The time to act to stop this injustice is now and action is demanded.

©2013 WNN – Women News Network No part of this article release may be reproduced without prior permissions from WNN.