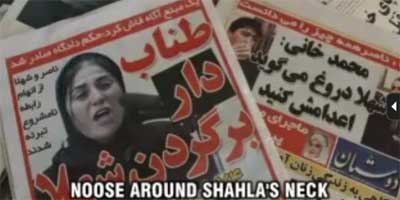 The Execution of Shahla Jahed

Last night was one of the most heart-rending experiences of my life as I sat and watched and waited for confirmation that a woman in another country, far from my UK office, had been hanged.

For over 2 hours I sat with my husband watching a dreadful scenario unfold on my computer screen, as the world hoped and prayed that Iranian authorities, who held the life of this woman in their hands, might step back from the edge at the very last minute.

I HAD NEVER HEARD OF SHAHLA JAHED

Up until a few hours earlier, I had never heard the name Shahla Jahed.

A quick search found that she was famous in Iran, as she had been the 'temporary wife' of a famous football player.

Had been put on trial accused of murdering his 'permenant' wife. That the Iranian judiciary had announced her execution would happen in a few hours.

And then we found some videos. Apparently her trial had been filmed and a documentary made.

We sat for the next 40 minutes watching the film - Red Card.

The more we watched the more 'real' this story became.

The sense of desperation was acute.

How can we do something to prevent this execution happening?

Surely there is something that can be done?

Surely there is some department in the United Nations that can be called up and who can intervene at the last minute?

But slowly the reality sunk in.

We were too late. The execution was imminent.

This emotionally fragile woman in the videos was about to be hanged.

And then a message came out that Shahla had been executed. But there was still some doubt.

A glimmer of hope perhaps?

Messages which painted a picture of how Shahla's family and friends were waiting outside the prison, just like us, trying to find out the news.

When final confirmation came that Shahla had been executed, we were engulfed in many emotions.

Emotions of intense sadness, of intense rage and overwhelming helplessness.

Within half an hour my husband had the story of Shahla posted on the website and we were receiving hundreds of messages. It was all we could do now.

Now it is a few hours later.

As I write, I watch to see how the world is responding - hoping that perhaps this story will have crossed the threshold out of the internet and into the mainstream media.

Hoping that next time, and there will always be a next time until some radical change comes about, I get to know about what is happening, sooner.

Hoping I can do more to prevent it.

Hoping, also, that those whom we entrust with the reigns of government, in our more liberal democratic societies, will find new ways to protect women like Shahla.

Trusting that events like the death of Shahla will not have to be witnessed by our children.

Trusting that, one day soon, those that committed this atrocity in Iran will fade into history like the many dictators before them.