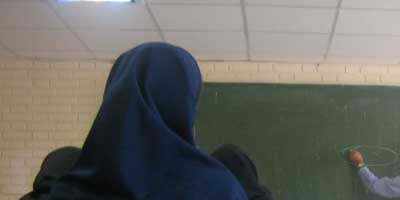 Despite the election of new President Hassan Rowhani in the Islamic Republic of Iran (IRI), women continue to face new challenges in exercising their civil rights. For women this means a great challenge to reach equality as well as accessing educational and workforce resources.

Many women’s groups have been skeptical about the scope of changes that Iran’s new president will bring for Iranian women as women express publicly what they expect from the new president. Asking for Iran’s government to remove all “obstacles” that were created during eight years of Ahmadinejad’s presidency, many women who have received a higher education are now suffering under a growing national gender gap that is blocking their ability to participate fully in Iran’s society, especially its economy.

“These obstacles include measures and policies aimed at limiting women’s public and social lives,” outlines expert sociologist and Iranian university professor Dr. Ms. Shahla Ezazzi. “Apparently, [the authorities] had come to the conclusion that if men don’t want to control their women and force them to stay at home, the government should act as father and grandfather and control women,” Ezazzi continued. “…this way of thinking has led to restrictions on women’s access to higher education, prohibitions on their studying certain disciplines at universities, and encouragement to stay at home and have babies,” she added.

Not only is Iran’s new President Rowhani not responding to women activists, but there are new restrictions on women in accessing jobs, especially jobs for single unmarried women.

During the first decade after the Iranian revolution in 1979,  many western scholars debated the impact of the revolution on women’s economic participation and employment patterns. 35 years after the revolution in 2014 it is clear that the impact of fundamentalist Islamitization and economic policies on Iranian society over the last three decades has not brought good news for women. Instead it has resulted in marginalization in the role of women in Iran’s society and economy.

The Comprehensive Population and Family Excellence Plan in Iran proposes legislation that covers 50 legal articles that aim to encourage population growth, a departure from Iran’s current population control policies which have been in effect for the past two decades. Incredibly The Plan’s main goal is: to “increase the pregnancy rate to 2.5% of the quantitative population growth until the year 2025, simultaneous with qualitative improvement of the population and its stabilization by the year 2051.”

The Plan also lays out intentions to deny some women access to the jobs market in the hope that this will make them more likely to stay at home and bear children.

With wide opposition from Iran’s civil society The Plan has been opposed by women’s groups and activists alike, as well as those living outside in the diaspora. Through an act of opposition 650 signatures on a petition state that The Plan in Iran will only work to widen the country’s gender divide in labor. It will also place new and additional restrictions on women’s employment, particularly on unmarried women.

According to human rights reporters at ISNA – Iranian Student News Agency, the rate of unemployment for women increased inside Iran in 2013. This was assessed as numbers were recorded for women’s employment during the Spring of 2013. Showing a rate that is five times greater than the rate of unemployment for men, women’s employment is 13.6 percent, as compared to 64.7 percent for men. Under employment policies that produce a major barrier for women’s fair competition in the job market, as well as a chance for ‘equal-pay-for-equal-work’, the government of the Islamic Republic of Iran now encourages and incentivizes women to stay home, get married and raise more children.

“Much like the other laws and resolutions passed over recent years; women are again deprived of their rights in this plan and are only seen in their reproductive position,” shared Iranian women’s rights group Change for Equality.

In their statement the 650 petitioners have relayed to the government of Iran that The Plan’s “regrettable [policy] articles” covering women, specifically pertaining to new restrictions on the use of contraceptives, intends to further restrict women. It particularly restricts single women from accessing employment and educational opportunities, outlines the International Campaign for Human Rights in Iran.

Barriers on women’s employment also affects a diverse array of careers. Women real estate agents, while holding more than 66 percent of the real estate business licenses issued in Tehran, are currently banned in Iran from working in their chosen field as real estate agents. Women are also only currently allowed to be employed as a clerk only in any real estate agency office, including their own office.

According to Sharia Law in Iran, it is the duty of the husband to work for a living and provide nafaqa (maintenance) for the family while the wife has no such duty. However if a wife decides to work, whether on account of her personal desire or due to an insufficient income of the family she does have the right to work, outlines the Law. This right nevertheless is conditional and can be restricted by the husband.

“The husband can prevent his wife from an occupation or technical profession which is incompatible with the family’s interests or the dignity of him or his wife,” outlines Article 1117 of Iran’s Civil Code.

Article 1117 does not forbid or deny the wife’s general “right to work.” Instead it gives the husband the right to prevent his wife from a “specific  job or profession.”

According to the Global Gender Gap Report in 2013 issued by the World Economic Forum, Iran now ranks close to the bottom of the list for women’s economic participation at position 130 out of 136 countries. As the social and employment engineering of the IRI aims to close the employment gap for women it is actually widening the barriers for women inside the labor market.

In other words, the Civil Code has not prescribed the same rights for a wife to prevent her husband from taking a job even though she may view it as incompatible with the family’s interests or her position. Seeing that the Law does not protect women’s rights in Iran, some women when marrying their husbands now add binding conditions to their marriage contract stating that a husband cannot forbid them from working. A woman may also stipulate in a marriage contract that she can keep her current job even after marriage.

While restrictions against women real estate agents is not a new ban on women in the field, a recent threat in real estate office closures by the head of Tehran’s Real Estate Consultants Association forewarns that offices with any women holding positions as real estate agents will be closed as a form of punishment for one week.

“According to Islamic rules the rights of men and women are equal but the ban on women holding a position of real estate agent is just to ensure the safety of women,” said the president of Iran’s Association of Real Estate Agencies in a recent interview.

The 650 signatories of the petition to stop The Comprehensive Population and Family Excellence Plan strongly disagrees though.

“Is there no other way to promote excellence than to deprive women of jobs, income, and education, and to limit women to the role of a procreation instrument and not as half of the population with rights?” outlined the 650 petitioners to The Plan in their statement. “Why does excellence in every issue mean discrimination and limitation and animosity with women’s rights for the legislators?” they continued.

Emphasizing that depriving women of employment does not lead to their bearing more children and would only lead to an increase in both women’s and men’s presence in the unofficial and unsafe job markets, the statement signatories also asked members of the Iranian parliament to remove The Plan from their agenda. They also caution parliamentarians that approving The Plan will only serve to increase gender discrimination in Iran as it becomes “a huge regression for women” under the Law.

The reality of women’s economic participation is far from the Sharia Law that manifested itself through religion 14 centuries ago.  According to Shargh News in January 2014, women heads-of-household make up 12 percent of all families in Iran. Surprisingly 82 percent of these women are unemployed. This means out of 2.5 million families with women heads-of-household, only 550,000 are employed.

As Iran’s labor market ‘inflexibility’ and social engineering policies deny women public space and presence, the structure of inequality is not on the agenda for Iran’s new president. Women’s human rights and dignity are as fragile in today’s Iran as ever since the beginning of the establishment of Islamic Republic of Iran in December 1979.

Some women do receive minimal governmental support, but 250,000 families are currently not receiving any kind of support in Iran as they become statistics known globally as the ‘poorest of the poor’.