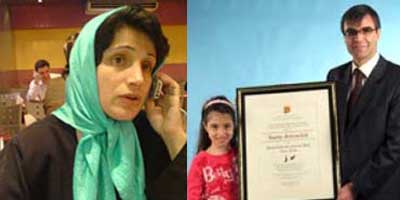 Nasrin Sotoudeh is a leading Iranian human rights lawyer widely respected for her efforts on behalf of juveniles facing the death penalty and for her defense of prisoners of conscience.

On 4th September, 2010, she was arrested by the Iranian authorities, allegedly on charges of spreading propaganda and threatening state security. She has been held in solitary confinement ever since.

On 25th September, 2010, Nasrin began a hunger strike, which she has recently resumed. Nasrin's trial is ongoing.

The following interview took place between November 15th and November 26th. During this time Nasrin appeared in court twice.

How are you and your family coping? How has your daily life changed for you and your children... do they understand the situation?

Because of the age difference between the children, I had to deal with each of them based on their level of maturity.

I thought Nima wouldn’t be able to cope for more than a couple of days, but with help from my mother and friends, we tried to create an environment that is normal and like before, when their mother was home.

Three year old Nima doesn’t understand the situation at all.

First he thought his mother was working a lot and wasn’t able to come home. But later he realized that her long absence didn’t have a connection with her work and then he started have questions about the situation.

Mehrawareh is 11. She is mature for her age and has filled most of the gap left by their mother for Nima. She has different things to keep her busy and away from worries.

She has become a bit quiet and serious. I am really alarmed and worried, but I try to control myself. Support from family, friends and people for the most part take away the sense of loneliness and incapacity.

Most of our worries are not about the present. Instead, we are worried for the future because of how her imprisonment continues after all this time.

What conditions is Nasrin kept in, and how is her treatment?

Physically she is very weak because of her hunger strike and one can hardly believe she is the same person that she used to be.

From the time of her arrest, she has been completely alone and in solitary.

The pressures of being away from family – especially one’s young kids – make anyone in this situation suffer. They have employed almost every form of psychological pressure on Nasrin.

She said that she will never forget the pain she felt from being forced to not attend her father’s funeral.

Most of all she’s affected by the continued lies and empty promises they make to her.

What rights has Nasrin been granted, and what has she been denied?

The first right that they have taken from her is her freedom because she is only accused and her crime has not been proven.

She should be free while her case is in court until the accusations are proven.

We don’t know much about her conditions. She has only been able to see the case against her while in court. Other than that she knows very little about the details of the case or evidence against her.

Only met our children once

In the past 75 days, she’s only had one official visit and other than that, it has been sporadic. In those 75 days she’s only been able to meet her children once.

I have personally only met her once and it was also in court in front of employees, officials and lawyers. She has not been able to contact her family and lawyers except for a few exceptional times. One time, it was only for three seconds.

Physically, she has become so weak, you wouldn’t be able to recognize her.

Emotionally, she is doing better, but she really misses her children.

What, if anything, gives Nasrin comfort while in prison?

We don’t know. We only know that she has no contact with other prisoners and is continuously kept in solitary confinement.

How many times have you and your family been permitted to see her?

The first time they let her meet her sister. The second time, they asked me and the children to come visit and when there, they stopped me and I couldn’t let the kids go alone with the prison guards.

They came crying back from the prison

The third time, the children along with Nasrin’s sister and my mother went to see her for the first time under very bad conditions and all came crying back from the prison.

We don’t have any telephone privileges at all. Telephone contact with her is only possible from the prison compound and that too only rarely.

What concerns do you have about Nasrin’s trial and her sentencing?··

Our worry is that she will be sentenced to a lengthy prison term even though she should be respected and rewarded because not only is she innocent, she is a source of pride!

Before the trial, in 70 days, lawyers were only able to meet her once and read her file.

What was your first thought when you saw her today [November 15, after her first trial date]... how has she changed?

She was extremely weak and thin. She looks like when she was young, so I'm trying to convince her to end her hunger strike.

I held her hand and it was so small, felt weightless.

75 days of solitary has taken its toll, she was very excited to see me and was very emotional but not during the trial.

I was not able to see her in trial but her lawyers said she was serious and determined in court, as she always is during appearances.

What support have you had from the international community?

The only help we are aware of is several statements made in support of Nasrin. If there has been other international support, we are not aware of it.

We expect the international human rights institutions to show their powerful presence and support Nasrin, because she was a defense lawyer herself. Her trial put law on trial.

If any government can block the power of a human rights attorney, its hands are free to treat its critics and opponents in any manner it desires. Unfortunately the international community allowed the government to break this barrier.

Any international advocacy is appreciated and will aid in her release, especially if it is non-political and persistent.

Her message is for the law to be enforced fairly and all the laws that allow discrimination to be reformed.

What do you want the world to know about Nasrin?

The world should know that all she has done is to earn this punishment is support her client.

Even when she was threatened with arrest, she continued to support her clients with bravery and determination.

Nasrin has many faces. When she is with the children, she leaves her professional world to be a real mother, and as a professional she gives a new meaning to what professionalism means. She is also a wonderful spouse.

Whenever there is a contact, whether in presence or by phone, we miss her even more.