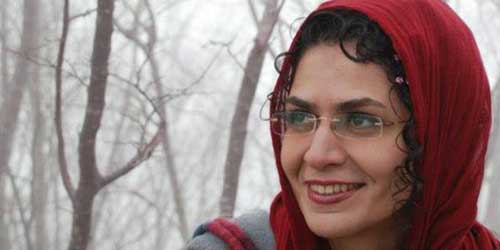 Bahareh Hedayat is a rights advocate whose advocacy for student and women’s rights placed her on the frontlines of the violent crackdown surrounding the June 2009 flawed presidential elections in Iran. She was arrested in December of 2009 and charged with three arbitrary offenses. She was sentences to two years for “insulting” the Supreme Leader Ayatollah Ali Khamenei, six months for “insulting“ President Mahmoud Ahmadinejad, and five years for “actions against national security, propagation of falsehoods, and mutiny for congregation.”

Now after spending six years in one of the most notorious prisons of Iran, despite the imposition of solitary confinement, prolonged interrogations, medical neglect, and denial of family visits, after all the pressure, harassment and suffering that she endured, she has completed serving her unjust sentences but she is still kept unlawfully in detention.

Bahareh is the longest serving woman prisoner of conscience in Iran. She was arrested right after she married Amin Ahmadian and celebrated her 30th birthday in prison. I wrote this article on the occasion of her thirtieth birthday in Prison in 2011.

Iran’s judiciary is not in compliance with international standards, lacks independence from intelligence authorities, and has no explanation as to why a prisoner such as Bahareh is continuing to languish behind bars, after her sentence has been served.

A consecutive sentence or “cumulative” sentence is when a defendant has multiple convictions, usually at the same trial, and the sentences for each crime are “tacked” together, so that sentences are served one after the other. A concurrent sentence is when sentences on more than one crime “run” or are served at the same time, rather than one after the other. This means that according to the Article 134 Bahareh Hedayat had to serve a five year sentence which is the maximum sentence that she received and served to completion in June 2015.

Note 1- If multiple criminal outcomes resulted from a single criminal conduct, it shall be dealt with according to the abovementioned provisions.

Note 2- If the offenses committed cumulatively fall under a specific title of an offense, then provisions regarding multiplicity of offenses shall not be applicable and the offender shall be sentenced to the punishment provided in law.

Note 4- The provisions regarding multiplicity of offenses shall not be applied to ta’zir offenses of the seventh and eighth degree. Such punishments shall be added together as well as to ta’zir punishments of the first to sixth grade.”

Mr. Mowla'ii, Bahareh’s attorney and Amin Ahmadian, her husband have been following up on this issue unsuccessfully for more than a month. Bahareh’s mother in an interview with Iran Human Rights Activists News Agency on August 6th stated “they want to kill my daughter”.

The human rights community and Bahareh’s family are concerned that perhaps a decision has been made by the Intelligence Ministry to continue to keep Bahareh in detention.

The context of this illegal confinement is the absense of independence of the judicial system in Iran, improper influences of the intelligence forces, lack of the exclusive authority of the judiciary, the inability of the judiciary to limit jurisdiction to areas as defined by law, and the fact that the binding nature of the court decisions is not in place in Iran.

The Eighth United Nations Congress on Basic Principles on the Role of Lawyers in 1990, articulated that "to be respected and taken into account by governments within the framework of their national legislation.” The attempts of Amin Ahmadian and Bahareh’s attorney, however, to hold the judiciary accountable for the time limit of her sentence has not only been unsuccessful thus far, but also resulted in threats and intimidation against them.

The Iranian government defines “national security” and the breach against it in narrow terms that infringe on internationally guaranteed rights of free expression, association, and assembly.

It is an internationally accepted principle that illegal and prolonged confinement of prisoners, including but not limited to prisoners of conscience, is a violation of the fundamental rights of prisoners.

In 2012, The Harald Edelstam Foundation of Sweden presented Bahareh Hedayat with the t first Edelstam Prize for daring to play a leading role in the student's movement as in the women's rights movement in Iran, and has been an active critic of Iran's human rights violation. The award was given to her for her courageous actions in the face of adversity.

Human Rights defenders like Bahareh Hedayat are the inspiring leaders who in the words of Betty Makoni a Zimbabwan gender and human rights activists “are passion holders, speakers, people with a vision and holder of the front-line.”