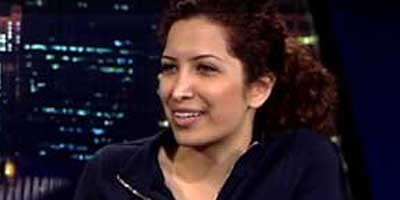 The Courageous Women of Iran is a film made by Irish television about the brave women in Iran who decided to challenge the unjust laws which meant that they were treated as 'Half a Man'.

The documentary features interviews with the women involved and tells the story behind the One Million Signatures Campaign and the dangers faced by the activists.

We follow them onto the streets and watch as their hopes rise at the possibility of being able to achive their dreams when the election in 2009 was held - and lost.

A truly remarkable film, both as·a historical record for future generations and as an encouragement for women everywhere who are striving for freedom.

WOMEN FEATURED IN THE FILM

Perhaps the most well-known advocate for Iranian women's rights, Shirin Ebadi, a lawyer and former judge, won the Nobel Peace Prize in 2003 for her pioneering efforts to promote democracy and human rights, particularly for women and children.

She was the first person from Iran and the first Muslim woman to receive the award.

Ms Ebadi's outspoken campaigns have often brought her into conflict with the Iranian government and the country's conservative clerics, particularly since the disputed presidential election in June 2009.

From the early 1990s, she was allowed to establish a pro-bono law practice and started taking cases that exposed injustices in revolutionary Iran's legal system.

Many of Sherin Ebadi's close associates have been targeted and last year the authorities closed the Human Rights Defenders Centre in Tehran, a leading non-governmental organisation she founded in 2001.

Recently, Shirin Ebadi has spoken out about the case of detained human rights lawyer and colleague, Nasrin Sotoudeh.

Speaking to the Guardian in December 2010 and now living in exile in London, she said: "I'm extremely worried for her. She was terribly weak and lost a lot of weight when her family met her last time. She is definitely in immediate need of proper medical treatment."

Mehrangiz Kar, human rights lawyer born in 1944, is a contemporary of Shirin Ebadi and has seen as many changes.

Now living in the States, Mehrangiz is an attorney, writer and activist working toward the promotion of democracy, the rule of law and human rights within the framework of Islamic law in the Islamic Republic of Iran... and has been an active public defender in Iran’s civil and criminal courts.

Banned from making public appearances within her country, including conferences, radio and television, Ms. Kar has used international forums as a platform for voicing her opinions and advocating for the democratic, political, legal, constitutional and human rights of the Iranian people.

In April of 2000, following her participation in a symposium in Berlin, she was arrested and imprisoned on charges of acting against the national security of the Islamic Republic of Iran.

Three of the five charges against her are pending, for which she may again be arrested upon her return.

In April 2009, Maryam Malek was a 26 year old college student and a member of the One Million Signature Campaign.

She has wrote extensively about the difficulties women face in family court due to discriminatory laws.

Maryam Malek was the first member of the Campaign to be officially charged with being involved in the Campaign.

The charge infered that the Campaign is an illegal organization. Like Maryam, all members of the Campaign denied that their activities are illegal and strongly contend that they are acting within the law and their basic rights as citizens to have their voices and objections heard by other citizens and their representatives in Parliament.

A founder of the Million Signatures Campaign, Sussan Tahmasebi has been a women's rights and civil society activist for nearly 2 decades.

For eleven years she has worked in Iran at the national and grassroots level to address gender issues and women's rights and also to strengthen and promote the role of civil society organizations.

Now living in exile, Sussan Tahmasebi was charged with spreading propaganda against the state and being a threat to national security for organizing a protest in support of women's rights in June 2006.

She appealed the ruling and was freed on bail pending the appeal, which is still ongoing.

A founder of the Million Signatures Campaign, Parvin Ardalan is a leading Iranianwomen's rights activist, writer and journalist.

She was awarded the Olof Palme Prize in 2007 for her struggle for equal rights for men and women in Iran and became a household name in Sweden. Teheran's refusal to allow her to attend the ceremony in March 2008 caused outrage in the Scandinavian country.

In March 2010, after being sentenced to several jail terms in Iran on charges of seeking to harm national security, she went into exile.

She received a grant to allow her to "freely carry out her profession," the city of Malmö in Sweden, part of the International Cities of Refuge Network, an association of cities and regions around the world dedicated to the value of Freedom of Expression.

An American student and women's rights activist has been arrested in Iran while visiting her family and conducting research into the Iranian women's movement.

Esha Momeni, a masters student at California State University, was seized last week while driving in Tehran, according to Amnesty International.

She was initially arrested for a traffic offence on October 15, but then her computer and other materials were confiscated, and she was taken to Evin prison, which is notorious for holding political prisoners.

Momeni is a member of the Iranian women's rights group Change for Equality.

'...When I was released I was completely shocked by the extent of the support I received from everyone. A ray of hope, hope in people's will, reminding me that we can still make a difference. It is your support that brought me out of that abysmal well. In today’s world even though the technology has given us the chance to communicate worldwide, we still know so little about other people’s culture, history and the truth. We still see the differences more than similarities. We still think others are far enough that their lives have no impact on ours and vise versa. But with your support, you proved that we are all connected and we can make a difference even on someone’s life on the other side of the world. The more we realize this connection the better our world will become.

Thank you! Thanks to everyone who worked so hard on my behalf, many of whom I have never met, in particular thanks to my family and friends, Professor Wall, my comrades in One Million Signatures Campaign, my classmates at CSUN, and last but not least my dearest friend and supporter Hassan.

I Hope for the day that there are no longer any political prisoners anywhere in the world.

In an interview with Sussan Tahmasebi, in December, 2008, Hoda said:

"When I entered the University I was one of the first few female students to enter into political activity, at the Islamic Student Association. The space provided to female students for activity was very limited at that point...

I am responsible for the face-to-face section of our Farsi website, Change for Equality... In this section, activists in the Campaign write about their experience of engaging in face-to-face discussions with ordinary citizens in an effort to collect signatures in support of the Campaign's petition.

I believe that these pressures have worked to create unity and solidarity among the activists involved in the Campaign. If you are involved in an effort to which you are committed, these pressures will only strengthen your resolve to continue along your goals.

They cannot harm your commitment to what you are doing, unless of course you think about your personal interests and withdraw."

As a journalist she wrote for various reformist journals, among these Payam-e Hajar. Later this publication was banned as it upheld fighting for the equality of women

On 7th September 2008 Narges Mohammadi was elected as president of the executive committee of the National Council of Peace in Iran, a broad coalition against war and for the promotion of human rights.

The National Peace Council wants the world to see "another Iran", which is against any violent action and committed for the construction of peace, safety, stability and well-being through relationships based on tolerance and friendship.

On 2 July, 2009, at a ceremony held in the City of Bolzano, Italy, Shirin Ebadi, the recipient of the Nobel Peace Prize, accepted the 2009 Alexander Langer Award on behalf of Nargess Mohammadi, who was banned from travelling.

Narges Mohammadi was arrested in June 2010 and then subsequently released after a worsening of her health condition due to harsh conditions in Evin Prison.

Her husband Taghi Rahmani has said that a form of paralysis began after his wife’s imprisonment and has continued since.

Despite having carried out many medical tests, doctors are still unable to uncover the reason behind her paralysis.'

VICTIM OF THE REGIME

In 2004, the BBC reported the shocking case of Atefah Sahaaleh:

On 15 August, 2004, Atefah Sahaaleh was hanged in a public square in the Iranian city of Neka.

Her death sentence was imposed for "crimes against chastity".

The state-run newspaper accused her of adultery and described her as 22 years old.

Disturbed by the death of her mother when she was only four or five years old, and her distraught father's subsequent drug addiction, Atefah had a difficult childhood...

Atefah became involved in an abusive relationship with a man three times her age.

She kept the relationship a secret from both her family and the authorities.

Atefah was soon caught in a downward spiral of arrest and abuse...

The moral police said the locals had submitted a petition, describing her as a "source of immorality" and a "terrible influence on local schoolgirls".

But there were no signatures on the petition - only those of the arresting guards.

When Atefah realised her case was hopeless, she shouted back at the judge and threw off her veil in protest.

It was a fatal outburst.

She was sentenced to execution by hanging, while Darabi got just 95 lashes...

For Atefah's father the pain of her death remains raw. "She was my love, my heart... I did everything for her, everything I could," he says.

He did not get the chance to say goodbye.