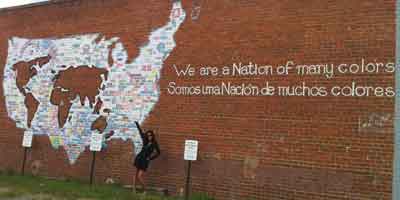 Melody Moezzi is an inspirational Iranian writer, activist and attorney.

Melody's first book, War on Error: Real Stories of American Muslims, brings together the stories of twelve young people, all vastly different but all American, and all Muslim.

Melody is a United Nations Global Expert with the UN Alliance of Civilizations and has worked with the U.S. Department of Homeland Security reporting to the U.S. Congressional Commission on International Religious Freedom.

I read your article about Islamophobia being more dangerous than Islam, which of course I completely agree with. In the UK, racism and Islamophobia seems to vary a lot from one part to another, with may be a tendency for the rural areas to be worse - possibly out of ignorance. Does the attitude vary a lot in different parts of the United States?

I travel the US quite a bit and I live in the south. And the perception is that people are exceptionally ignorant in the south. I’ve found that not to be true. I’ve found it’s really a matter of meeting people.

Really the news affects people quite a bit obviously – but if you know one Muslim who’s a decent person, who’s willing to come out and say that they’re a Muslim, this really changes the perception – whether it’s in a rural area or an urban area doesn’t matter. To the extent to which somebody is ignorant about Islam really doesn’t matter.

For example, with me, I had a lot of misperceptions and assumptions about Mormons in the United States.
I lived in Montana for a short period of time. And every single Mormon I met was wonderful. And that completely turned my perception of that faith around. And it wasn’t based on reading the book of Mormon, which I have yet to read, and I’m not sure I will do! But it had to do with the people whom I met.

And I think that’s pretty much what needs to happen. And what is happening.

And the great thing about the United States is that it is an immigrant culture.

I think it’s more a matter of interpersonal connections.

I don’t think religion is something that you need to be too open about, but I think especially these days, as Muslims, we have something of an obligation just to make it clear, whenever we think it’s relevant, in our workplace or wherever, that we are Muslims and not to be afraid to say that, because every time we say that we change people’s perception.

Because the majority of us don’t cover our hair these days and the assumption is that you do cover your hair.

So the more of us that stand up and say ‘you can’t identify us that easily – and we look like you and we act like you as well’ – I think the quicker the misperceptions will be addressed.

The Islamic world is huge. Presumably it’s varied like the Christian world is and you can’t categorise Muslims and say ‘Muslims do this or that’, though of course people do sometimes try to.  In the Islamic world, are there similar sort of myths about ‘what westerners do’?

I think everybody’s different. Obviously there will be those misconceptions.

In Iran in particular, the attitude of the people towards the west is incredibly favourable.

The influence of western media inside of Iran is huge. I use the example that 10 years ago, when I was last back in Iran, the rock band 'The BackStreet Boys' were big. I’d never heard of them at the time. They hadn’t hit America yet. But they were obviously very big in Iran, and my cousins had posters of them in their bedrooms and things like that and I remember saying ‘no they would never make it big in America’.

Do you think, amongst the younger generation in the United States, there’s less Islamophobia? Is this perhaps a matter of young people throughout the world connecting more with each other?

I think so.  And I think it’s very much decreasing.  Not just Islamophobia but racism in general. And homophobia.

These things are decreasing, I think, in the younger generation.

Unfortunately in the United States, gays and lesbians don’t have strong legal protection rights. So these kinds of issues, as an American, that are most important to me, don’t actually apply as much to Muslims, because I feel we have these rights and I can assert them, no matter how ignorant my environment is. But they do relate to the LGBT community, for example.

For me personally, that’s been very important to me to speak out about gay and lesbian rights. And particularly within the Muslim community, because we do have a lot of gay and lesbian transgender Muslims in the US and abroad.
And within our own communities we need to reduce that level of discrimination and stigma.

And it helps to a certain extent to be within a minority already. As Muslims we know what it’s like to face a certain level of prejudice. So I think we’re in a very unique and good situation, believe it or not, to become more accepting and to become advocates, specifically for the LGBT community.

You say Muslims do have a lot of rights in the US. I would imagine they don’t necessarily all know that. And so it's one thing to have rights but also people need to know their rights?

That’s very true. Exactly. I feel like I’m in a privileged position as an attorney and especially because the laws of the United States are highly counter-intuitive especially when it comes to criminal laws – and more criminal procedure than criminal law – but yes it is a matter of knowing what your rights are.

There are certainly cases of discrimination. I’m just stating that those cases where you have discrimination against Muslims, they have high priority and full protection of the US constitution. Whether that’s granted by the US Supreme Court is a completely different story.

I would say, for example, the law’s discriminating against the LGBT community are completely unconstitutional and I fully believe that. But the Supreme Court doesn’t agree with me.

But when it comes to Muslims, religious minorities, ethnic minorities, racial minorities, it’s law and we’re very well protected - whereas other communities that isn’t the case yet.

That’s why I think it’s so important for us, as Muslims, who fully believe in fighting oppression, fully believe what the Qur'an teaches, that oppression is worse than killing, that we stand up for these other communities just as strongly as we would stand up for our own, because it’s our duty as Muslims to do that.

No, because the thing is, Islam teaches that other faiths are accepted. If you believe in the Day of Judgement, if you believe in righteousness, you’re supposedly taken into heaven. So it doesn’t say in the Qur'an that heaven is only for Muslims.

So obviously if that’s not a need - to be Muslim in order to go to heaven- then it’s not that important to be converting people.

Why the real threat is Islamophobia, not Islam - article by Melody Moezzi

What is a true Islamic Republic? - article by Melody Moezzi