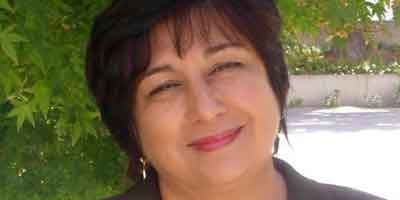 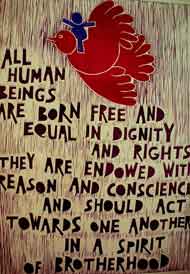 This poster [left] outlines Article 1 of the United Nations Universal Declaration of Human Rights. In a landmark decision the Geneva-based U.N. Human Rights Council voted in favour and endorsed the rights of gay, lesbian and transgendered people in a UN gay rights protection resolution for the first time ever on Friday, 17 June, 2011.

On May 17th, 1990 the World Health Organization’s made a decision to remove homosexuality from the list of mental disorders. Since then, each year May 17th is considered the International Day against Homophobia. This year organizations and communities in more than 70 countries of the world will focus on education and outreach against homophobia and transphobia.

The International Day against Homophobia is officially recognized by the European Parliament as well as the governments of Spain, Belgium, the United Kingdom, The Netherlands, France, Italy, Brazil and other countries. In 2011, on May 17th Iranian activists and their allies will embark on a campaign “We are everywhere” to talk openly and boldly against homophobia.

The recognition of this day by the World Health Organization came six years after the idea was initially launched in 2004. Two years later, in 2006, in response to widespread human rights abuse and violence, a distinguished group of international human rights experts met in Yogyakarta, Indonesia to outline a set of international principles relating to sexual orientation and gender identity.

The result was the Yogyakarta Principles: a universal guide to human rights which affirms binding international legal standards with which all international States must comply. These standards promise a different future where all people are born free and equal in dignity and rights and can fulfill their precious birthright.

The full text of the Yogyakarta Principles in all 6 UN languages can be found at www.yogyakartaprinciples.org and are shared in a condensed form here:

(The finalised Yogyakarta Principles were launched as a global charter for gay rights on 26 March 2007 at the United Nations Human Rights Council in Geneva).

Since December 10th 1948 when United Nation General Assembly adopted and proclaimed the Universal Declaration of Human Rights diverse human rights issues and categories have been expanded considerably. Minority rights is one of the emerging discourses today in human rights scholarship. But what does this mean?

Minority rights and human rights are among the new social movements of our time. The civil-rights of members of the international LGBT community face many challenges that other social movements not facing. Freedom in sexual orientation is a relatively recent notion in human rights law and clearly one of the most controversial ones in politics.

The negative stereotypes and discrimination against what is not “the norm” are deeply embedded in our value system and patterns of behavior. From the United States to South Africa; from Iran to Serbia, homophobic prejudice remains in a manner that would be unacceptable for racial, ethnic or religious minorities, despite the presence of “anti-discrimination” laws for people with diverse gender identity.

Theocracies such as those in Iran that challenge the rights and dignity of members of religious minorities who follow the religions of the Bahá’í, Judaism or even certain diversities of Islam – such as Sufism – are also being violated on daily basis. The situation for ethnic minorities such as the Kurds, Arabs and Azari’s are no better. Their rights and dignities are also being violated and undermined explicitly or implicitly.

The core principles guiding a human rights approach on minority rights relate to non-discrimination and equality. True human rights advocates seek to ensure respect and dignity for members of all minority groups worldwide including LGBT communities. They also strive to expand the role of international human rights law as a formidable adversary of persecution and discrimination throughout the world.

The offenders are not only international State authorities but many non-governmental organizations, public or private organizations and groups. Many share a non-adherence to accepting the full diversity of the human rights discourse. While the Iranian government openly and shamelessly denies the rights of ethnic, religious and gender identity minorities among the Iranians opposed to the Islamic Republic of Iran and even among intellectuals claiming to be secular, there is a great need of education and re-education on various aspects of human rights violations including minority rights.

Defending the human rights of minorities often being ignored and disregarded come with arguments such as “… that is not important issue at this time” or “There are other more crucial issues”.

The first human right is the right to be considered and treated as a human being. In spite of this, minority groups of political, social, sexual orientation, ethnicity and religion are being dehumanized by those who allow themselves to create a culture of fear. Intimidation based on “not being norm” is in the words of historian C. Vann Woodward, the “Permission-to-hate”.

Across the globe, a different sexual orientation and gender identity leads to human rights abuse. The abuse comes in the form of discrimination, violence, imprisonment, torture and even execution. Persecutions on the basis of sexual orientation and gender identity can take a variety of forms and can contravene the basic tenets of international human rights law.

We learn in an article/report on the Global Network of Iranian Women that the Iranian “Rainbow Community” distributed brochures this year on the International Day against Homophobia. Brochures by the Rainbow Community about homophobia were distributed in Tehran and other cities in Iran.

The articles also states: “…. the media in Diaspora that are enjoying more freedom in addressing various aspects of human rights violations and discriminations did not take full advantage of the opportunity to educate the public about homophobia.”

LGBT activists who claim their rights and dignity, along with their allies in need, have been supported by many women, gender feminists and human rights activists during the last two decades. The issue of LGBT rights is not a recent proposition. Feminist activists inside the Iranian Diaspora have also had this issue on their radar.

In annual conferences The Iranian Women’s Studies Foundation, as well as The Annual Conference of Iranian Women in Germany, have presented, discussed and debated the conditions of discrimination and human rights violations of the LGBT community inside Iran and among the Iranian Diaspora.

In 2005, a formal statement signed by a number of bloggers, individuals along with organizations said: “Solving social problem(s) requires conscious and responsible participation of all citizens. The repression, prejudice, discrimination and injustice toward homosexuals is a social problem and the solution requires participation of all citizens regardless of their sexual orientation.”

The May 2011 “We Are Everywhere” campaign once again brought voices from the margins to the center against homophobia and discrimination. A number of younger Iranians, many born and raised inside the Islamic Republic of Iran, including Ali Abdi, talked openly and boldly about their gender identity. During the campaign Iranian anti-discrimination and gender equality activists took a stand together against homophobia.

“We, all standing beside each other, are members of a rainbow community without borders, and there are always opportunities and possibilities of improvisation in gender and sexual expressions.”

In a world where human rights language is broadly accepted and being used and misused by revolutionary and counter-revolutionary movements building a movement with transparency, accountability and integrity, away from double standards and the rhetoric of the politician, face many challenges.

The challenges can be found with human rights defenders and the Country States that offend those rights; with forces of occupation and those whose lands are being occupied; with imperial powers that are waging war and peace activists; with women who claim their basic human rights and the patriarchal dictatorships that deny those rights.

Building a movement in Iran that embraces all categories of human rights harmoniously without any distinction from labor rights, to LGBT rights, to women’s and children’s rights, to the rights of the disabled and the rights of students, teachers, journalists and political prisoners is our only hope for a society free of discrimination.

The plight of human rights defenders and the rainbow of activism for the dignity and rights of all Iranians should be free of discriminations!

Elahi Amani is a Humanitarian, gender specialist and peace activist. Elahe Amani works with immigrant women who are part of the South Asian, Iranian and the Middle Eastern ethnic communities in Southern California. Her work helps women from these communities build peace at home and in society. She is Chair of Global Circles at Women Intercultural Network, a global women’s organization with grassroot circles in Uganda, Japan and Afghanistan.