Were these children executed by US troops in Iraq? 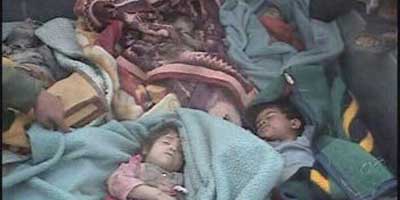 Photo taken by a resident of Ishaqi on March 15, 2006, purports to show bodies of children executed by U.S. troops after a night raid.

A photo taken by a resident of Ishaqi in 2006, purports to show bodies of children shot in the head after an operation by US troops.
A diplomatic cable, released by WikiLeaks, contains comments by a UN investigator that autopsies showed four women and five children had been handcuffed and shot in the head.

Extracts from articles by Matthew Schofield from McClatchy Newspapers

In early 2006 Iraq was fast descending into chaos

Ishaqi, about 80 miles northwest of Baghdad, not far from Saddam Hussein's hometown, Tikrit, was considered so dangerous at the time that U.S. military officials had classified all roads in the area as "black," meaning they were likely to be booby-trapped with roadside bombs.

In 2006 news reports surfaced that the Iraqi police was accusing American troops of executing 11 people, including a 75-year-old woman and a 6-month-old infant, in the aftermath of a raid on a house.

According to a police document the villagers were killed after American troops herded them into a single room of the house. The soldiers also burned three vehicles, killed the villagers' animals and finally blew up the house

The case involved a U.S. raid conducted, according to the official U.S. account, in response to a tip that a member of al-Qaida in Iraq was at the house.

Neighbors, interviewed by a journalist, agreed that the al-Qaida member was at the house. They said he was visiting the home's owner, a relative. The neighbors said the homeowner was a schoolteacher.

According to police, military and eyewitness accounts, U.S. forces approached the house at around 2:30 a.m. and a firefight ensued. By all accounts, in addition to exchanging gunfire with someone inside the house, U.S. troops were supported by helicopter gunships, which fired on the house.

But the accounts differ on what took place after the firefight.

According to the U.S. account, the house collapsed because of the heavy fire. When U.S. forces searched the rubble they found one man, the al-Qaida suspect, alive. He was arrested. They also found a dead man they believed to be connected to al-Qaida, two dead women and a dead child.

Throughout the early investigation, U.S. military spokesmen said that an al Qaida in Iraq suspect had been seized from a first-floor room after a fierce fight that had left the house he was hiding in a pile of rubble.

However a report filed by local police said U.S. forces entered the house while it was still standing.

"The American forces gathered the family members in one room and executed 11 persons, including five children, four women and two men," the report said. "Then they bombed the house, burned three vehicles and killed their animals."

The report identified the dead by name, giving their ages. The two men killed were 22 and 28. Of the women, one was 22, another was 23, a third was 30 and the fourth was 75. Two of the children were 5 years old, two were 3, and the fifth was 6 months old, the document said.

The journalist  also reported Ibraheem Hirat Khalaf, whose brother Faiz owned the house and was among the dead, as saying that he watched and heard the assault from his home 100 yards away. And that U.S. troops used six missiles from helicopters to destroy the house as they were leaving.

The recently released diplomatic cable backs up the claims

Philip Alston, the U.N.'s special rapporteur on extrajudicial, summary or arbitrary executions, said in a communication to American officials dated 12 days after the March 15, 2006, incident that autopsies performed in the Iraqi city of Tikrit showed that all the dead had been handcuffed and shot in the head. Among the dead were four women and five children. The children were all 5 years old or younger.

Alston initially sent questions about the incident to the U.S. Embassy in Geneva, which passed them to Washington in the cable.

According to Alston's version of events, American troops approached a house in Ishaqi, which Alston refers to as "Al-Iss Haqi," that belonged to Faiz Harrat Al-Majma'ee, whom Alston identified as a farmer. The U.S. troops were met with gunfire, Alston said, that lasted about 25 minutes.

After the firefight ended, Alston wrote, the "troops entered the house, handcuffed all residents and executed all of them. After the initial MNF intervention, a U.S. air raid ensued that destroyed the house." The initials refer to the official name of the military coalition, the Multi-National Force.

Alston said "Iraqi TV stations broadcast from the scene and showed bodies of the victims (i.e. five children and four women) in the morgue of Tikrit. Autopsies carries (sic) out at the Tikrit Hospital's morgue revealed that all corpses were shot in the head and handcuffed."

The cable closely tracks what neighbors told reporters at the time.  Those neighbors said the U.S. troops had approached the house at 2:30 a.m. and a firefight ensued. In addition to exchanging gunfire with someone in the house, the American troops were supported by helicopter gunships, which fired on the house.

The cable also backs the original report from the Iraqi police, which said U.S. forces entered the house while it was still standing. That first report noted: "The American forces gathered the family members in one room and executed 11 persons, including five children, four women and two men. Then they bombed the house, burned three vehicles and killed their animals."

Furthermore the diplomatic cable also backs up the claims of the doctor who performed the autopsies that all the victims had bullet shots in the head and all bodies were handcuffed.

Philip Alston commenting on the cable this week said he could provide no further information on the incident.
"The tragedy is that this elaborate system of communications is in place but the (U.N.) Human Rights Council does nothing to follow up when states ignore issues raised with them."

At the time, American military officials in Iraq said the accounts of townspeople who witnessed the events were highly unlikely to be true, and they later said the incident didn't warrant further investigation.