The Deterioration of Women's Rights in Iraq 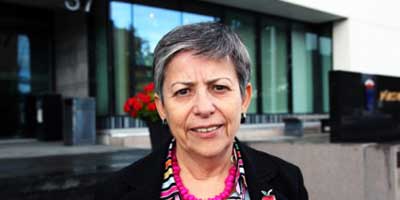 "Women's rights in Iraq have deteriorated"

An increase in violence, a low level of social security and an overall deterioration of women’s rights. Women’s situation in Iraq has worsened considerably since the US invasion 2003, says Iraqi women rights activist Hanaa Edwar.

The daily life of ordinary, poor women in Iraq is very hard. They are without income, social security and risk being abused. There is no water or electricity and they lack health care and education.

10 years have passed since the US war against terrorism began and Hanaa Edwar has a lot to say about the high price women have had to pay since the invasion of Iraq in 2003. And media is very interested in hearing it.

During her visit to Sweden, to participate in the Kvinna till Kvinna seminar Terror, gender and power: ten years post 9/11, she has been seen and heard in several of the big national newspapers, Swedish Television and Swedish Radio.

It has been important to seek solidarity and to explain what really happens in Iraq. Media seldom reports on the daily life of women, says Haana Edwar.

At the same time she admits that it’s difficult to give a comprehensive picture of the situation for civilians in the country.

It’s very complicated. I usually explain it by saying that the system being built in Iraq after 2003 is a system of chronic crisis.

Women’s rights have often been used as an argument for the war against terrorism. But according to Hanaa Edwar, patriarchal structures have been enhanced in Iraq and women’s rights and security have deteriorated. There is more violence and chaos and the state fails in keeping its citizens safe.

Family law has also been weakened when the interpretation by religious leaders have been favored, she explains.

One of the country's bigger problems is the increase in the so called sectarian violence, that started in 2006. It was the result of a dividing of power, after the invasion, on the basis of ethnicity and religion instead of politics, says Hanaa Edwar.
- In making that decision they took a step away from a unified Iraq, a country for all its citizens. Instead they increased the animosity between different parts of the population.

Apart from an increase in violence, and a worsened situation for women, sectarianism has also made it very difficult for people living in mixed marriages.
- People are afraid of entering into mixed marriages, something that has been very common in Iraq before. Those who already live in marriages with different sectarian and religious attributes are very vulnerable. They don’t know where to go to find a safe living environment.

Hanaa Edwar has been working within the women’s rights movement in Iraq, and in collaboration with Kvinna till Kvinna, for a long time. She is also the founder of Iraqi Women’s Network. She points out that the women’s rights movement has a long history, not only of highlighting women’s issues, but also of fighting for a peaceful and well working Iraqi state that include all its citizens. In 2010 they performed a sit down strike in the Iraqi parliament, as a protest against the incapability of the elected politicians to come to any agreements.
- The parliament set up a so called open session, which was against the constitution. It resulted in a situation where we had no state – there was no government or security in the country. Social welfare was taken away for 18 months. With the sit down strike we told our politicians to end their conflicts and start serving the people.

What can the international community do to contribute to the work for a better situation for the Iraqi people?
- It’s very important to support and strengthen women’s rights organizations and to put pressure on politicians so that women can take an active part in the political negotiations on peace and security.

And although Hanaa Edwar bears witness of an everyday life marked by violence and chaos, she is firmly determined to continue the struggle for women being able to participate in politics on the same terms as men.
- I have to do this, for the Iraqi people. We continue to fight for peace, equality and democracy in Iraq.

Over the past 28 years, MADRE has built a network of community-based women's organizations worldwide. This network encompasses thousands of women and families - in Sudan, Iraq, Nicaragua, Cuba, Haiti, Guatemala, Kenya, Peru, Colombia, Panama, Palestine, Afghanistan, Bolivia, and elsewhere - who are on the frontlines of our global crisis. In Iraq, Madre partners with The Organization of Women’s Freedom in Iraq (OWFI)

The Organization of Women’s Freedom in Iraq (OWFI)

The Organization of Women’s Freedom in Iraq (OWFI), founded in 2003, is a truly pioneering national women’s organization dedicated to rebuilding Iraq on the basis of secular democracy and human rights for all. OWFI has developed innovative anti-violence and political empowerment strategies for women across Iraq. OWFI advocates on behalf of women who are most marginalized, including those who are incarcerated, widowed, displaced or battered.

OWFI is working to combat a sharp rise in violence against women that has gripped Iraq since the US invasion of 2003. OWFI provides comprehensive services to women who have been targeted for violence, including the first women’s shelters in the non-Kurdish part of Iraq. OWFI has established five women's shelters—in Baghdad, Kirkuk, Erbil and Nasariyeh—to provide Iraqi women with a place to turn for security and support.

Demanding Rights for the Women of Iraq

OWFI works to increase women’s participation in local and national politics and enhance government accountability by facilitating communication and representation for women.

OWFI has organized demonstrations to protest the attempted dismantling of women's rights by US-appointed reactionary clerics and has called for the inclusion of progressive women in any new Iraqi government. Yanar Mohammed, the founder of OWFI, has received death threats from fundamentalist Islamist groups for her work to further women's human rights. But she continues to fight publicly against both the US occupation and Islamic fundamentalism, and to encourage and empower other women to do the same.

"Either we organize and demand our social and political freedoms," Mohammed declares, "or we give way to a theocracy and the institutionalized, legalized oppression of women in Iraq."

Despite the grim political realities they face, the women of OWFI are hopeful. OWFI's founding statement declares: "There is a huge emancipatory and secular force in this society that aims at achieving freedom and a better life for women . . . Women in Iraq deserve another kind of life; one that is full of freedom, equality and prosperity."

Combating Gender Discrimination in the Media

In the fall of 2009, OWFI launched the Al Mousawat Radio broadcast to reach out to women who have felt isolated and alone, to serve as a connection between Iraqi women and youth and the progressive community around the globe and, most importantly, to combat the fundamentalist mindset of mainstream media.

MADRE works with OWFI to create programming that offers listeners vital practical information on their human rights and introduces new perspectives that help to transform derogatory or harmful attitudes and practices towards women.

MADRE works with OWFI to support a brave group of Sunni and Shiite youth who are coming together to demand peace. FreedomSpace gatherings are public performances where people have the opportunity to share their poetry and music in order to promote reconciliation and human rights in a newly democratic Iraq.

FreedomSpace events are the only gatherings of their kind in Iraq today, where young people can constructively and creatively express their rage, their fears, and most importantly, their hopes for a peaceful future. These gatherings have been banned by Islamists. Several participants have been attacked, but Iraqis who want peace are flocking to these gatherings despite the danger.