The Decline of Women Leaders in Kurdistan 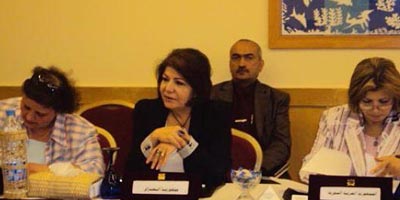 Female leaders and high-ranking civil servants in Iraqi Kurdistan have been removed from their posts and replaced by men in recent months, raising concerns that women are losing power in government.

Women’s rights organizations cheered a Kurdistan Regional Government (KRG) initiative to appoint women to ministerial, mayoral and other key decision-making posts over the past several years. However, Sulaimani province, which had three women mayors in mid-sized cities, now has no female mayors and the number of female heads of municipalities and department general-directors are on the decline.

According to a Rudaw investigation, of 27 female general-directors, mayors, and municipal chiefs in Sulaimani province, only 10 still hold their posts.

We can do what men do

Shirin Salih, the mayor of Qaradgh in Sulaimani province, was one of the leaders removed from her position. Now a housewife, she maintained the role of women in government is diminishing daily.

“Any woman who reaches a high-level government position without the backing of the Kurdish political parties will face all kinds of trouble and barriers,” she said.

“We can do what men do,” Salih said. “But it seems the KRG doesn’t believe in our abilities. That’s what happened – otherwise, why are the women who were removed being replaced by men?”

“If a woman has no support of a political party leadership, she will face all sorts of challenges and obstacles to make her life difficult,” said Munira Abubakir, the former mayor of the mountainous resort town of Dukan. “But when it comes to talking about the role of women, they say all the right things.”

Sulaimani’s Attorney-General, Naz Nuri, was the most recent high-ranking woman to be replaced by a man.

Narmin Osman, a leading member of the Patriotic Union of Kurdistan (PUK), which runs Sulaimani province, expressed her concern about the trend, saying women are also underrepresented in the party.

“In the future we will submit a report about this issue to the PUK leadership,” said Osman. “This phenomenon exists in the PUK ranks as well. We have already submitted a formal request to our party leadership to increase the quota for women in the PUK to 20 percent”

Abu Bakir, the former mayor of Dukan, said society and tradition is partly to blame.

“Tribal leaders and elderly men have visited (KRG Prime Minister) Barham Salih, Kurdistan Region President (Massoud Barzani) and other party officials many times and complained that having a female mayor was an insult,” said Abu Bakir.

“Unfortunately our government is giving in to social customs that impact civil and democratic progress,” said Pakhshan Zangana, a women’s rights activist and president of the KRG’s Women’s Council, which represents women’s interests in the region.

“Our council doesn’t have a budget yet,” she added. “If they give our council enough power and value, we can achieve a lot.”

Women's participation not a priority

However, Kwestan Muhammad, a member of the Change Movement (Gorran) believes that the KRG has never prioritized giving women more power.

“From the very beginning, women’s participation was not a priority for the current government, so it’s not surprising that they’re replacing women officials with men,” she said. “But in the Kurdish Parliament, this issue has been legally addressed, i.e. when a female MP is removed from her post, the person that replaces her has to be a woman as well.”

Ministry of Interior chief of staff Jalal Kareem dismissed claims that the KRG is systematically removing women from their posts.

“Governmental posts are not bequeathed and we can’t always find a female mayor to replace another because we appoint officials based on their experience,” he said. “We don’t have vacant mayoral posts to give to women at the moment. We don’t replace female officials with men systematically.”