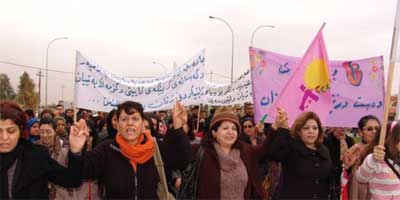 Many Iraqi rights activists are incensed by a new directive telling female civil servants to dress down at work.

Iraq's female civil servants are up in arms over a new government directive telling them to wear "modest" clothing.

The directive, issued on December 18, is a list of "don'ts" that includes no close-fitting T-shirts, tight trousers, short skirts, and sandals, as well as no ostentatious or glittery clothing in general.

It has quickly drawn the ire of government staff.

"We as public employees consider clothing a personal affair," said Hamsa Salah, who works for the state administration. "No institution, no ministry has the right to infringe on this and officially impose certain attire. We reject this."

Salah and many others are unhappy because they see the directive as unnecessary.

Very few women in Iraq dress to attract attention to themselves in a society where many men have been radicalized by violence and self-appointed gender police intimidate women on the street.

But perhaps the greatest affront is that the new directive does not come from religious authorities or fundamentalists.

Instead, it comes from a commission presided over by Iraq's Minister for Women's Affairs.

A Sense Of Anger And Betrayal

According to civil servant Razan Abdallah, this feels like a betrayal by the very people she counts upon to advance women's freedom:

Minister for Women's Affairs Ibtihal Kasid al-Zaydi claims the directive is necessary due to complaints from government offices that some female employees are not professionally attired.

"Actually, we do not restrict women and their freedom; we do not have the right to do so," she says. "The freedom to choose one’s attire and other freedoms are guaranteed by the constitution and do exist in Iraq. However, we tell women in the civil service that they should wear clothes in accordance with their specific position, as is usual all over the world."

But if many offices around the world do set dress standards for employees – either spoken or unspoken – many Iraqi women say they deserve a break.

No-one, they maintain, should doubt the seriousness with which they take their jobs.

"It’s enough that Iraqi women go out to work, thereby risking their lives every day for the sake of rebuilding the country," says rights activist Sundus Abbas, from the Women's Leadership Institute. "At the moment, in 11 percent of Iraqi families, women are the main breadwinners. And in 74 percent of these families, where women are widowed, they are the sole earners."

Abbas is calling on government institutions not to reduce the importance of their women employees to what they wear.

"Women go out and work to take part in the development and reconstruction of the country," she says, "not to show off their beauty and garments."