Iraq Ten Years On: What You Don’t Hear! 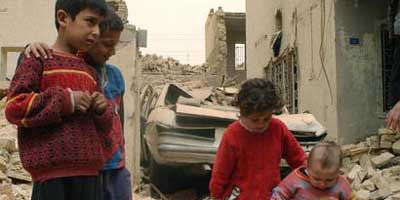 As 2013 marks the tenth anniversary of the Iraq invasion, I feel there are some points of focus which the media and campaigners need to address, if they wish to provide substance, to any area of focus for serious discussion.

Children, like many other civilians, are the silent victims of violence in war-torn Iraq, with the Ministry of Labour and Social Affairs estimating that around 4,5 million children are now orphans, with a shocking 70 percent of them having lost their parents since the 2003 invasion and the ensuing violence.

From that total number, around 600,000 children are living on the streets, without either shelter or food to survive. An estimated 700 children are also believed to be living in the few state run orphanages existing in the country, and are currently lacking in their most essential needs.

Throughout the US/UK occupation, the Association of Psychologists of Iraq repeatedly warned about the damage being caused to Iraq’s children, with “learning impediments” having been brought on by the fear of guns, bullets, death and a general “fear of the occupation”.

The Integrated Regional Information Networks (IRIN) also reported how violence and a lack of resources have undermined the education sector in Iraq. “No student will graduate with sufficient competence to perform his or her job, and pupils will end the year with less than 60 percent of the knowledge that was supposed to have been imparted to them".

According to one primary school teacher in Baghdad’s Mansour district, teachers have become unable to complete a year’s curriculum because of violence, low attendance as a result of fear and a general lack of teaching materials provided by the authorities.

Dr Fua’ad Azziz, a psychologist in Baghdad, stated how "Children have become prisoners", they “need to move, read, learn and play but today in Iraq such normal things might lead to death". Mental health experts also warned of other "fear" induced impediments, which are leaving children unable to attend school or form friendships, having witnessed gunmen "shooting friends", or being too terrified by the threat of "kidnapping" by gangs.

The US and UK Governments were warned in the early stages of the occupation, that the combined efforts to remove one Saddam Hussain, has resulted with over one million Saddam Hussain’s having been created as a direct consequence, to the long term exposure to violence.

Social workers and psychiatrists have long warned that failure to properly rehabilitate and care for traumatised children, particularly those who have lost their families, would eventually result in rising violence, with Colonel Jabber Al Beyati stating that; “A lot of the people involved in terrorist and criminal activity now, were themselves victims in the past.”

The clear absence of security and strategy has resulted with “neglected and brutalised” orphans, having grown up to become today's “most dangerous and committed insurgents”, according to Iraqi security agencies.

According to an Iraqi intelligence official, many of those who had left orphanages as teenagers, between 2003 and 2005, were now playing a key role in Al Qaeda-inspired insurgent groups, whose exposure to violence, has left them “very strong mentally” and able to respond to carrying out terror based actions, with feelings of “joy” and being “at peace”.

While the Iraqi Government has allocated an estimated $129 million to the provision of mental health care, to child victims in Iraq, the danger that is still posed is the clear absence of qualified and experienced trauma experts, and the putting into place of psychological therapies, which will have a long lasting benefit to the country.

The ongoing instability, the re-occurring political deadlocks which Iraq keeps encountering, will also hold up any development changes, which could be put in to place as a matter of urgency, and until the political situation improves, the ongoing violence will produce a situation, that resembles staring down the black hole of an abyss.

Also by Hussein Al-alak: IRAQ - The Road to Gendercide