Support from families is important for young women activists in Iraq 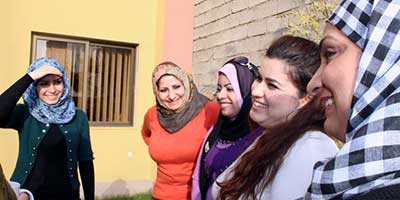 Being a women’s rights activist in Iraq is difficult. In addition to the security situation remaining critical, women face a number of obstacles when trying to claim their space in society and in politics. We talked to three young Iraqi activist about their experiences of fighting to not be held back.

People in Iraq are regularly exposed to violent attacks like car bombs and gunfire. Not only is the security situation hampering people’s possibility to live their lives in safety, it is also an obstable for women who want to change society.

“Security is a major concern. I can’t work freely because of all the bombings,” says Heba Al Badri from Basra in southern Iraq, who recently participated in a meeting in Erbil for young women’s rights activists, organised by The Kvinna till Kvinna Foundation.

However, violence is not the only thing preventing Heba Al Badri from carrying out her activism. She describes Basra as a narrow-minded society, especially when it comes to women’s rights. She herself has been questioned in her work as a pharmacist.

“Men ask me why I have a profession that includes going to different clinics and meeting men who work as doctors, and why I sometimes work late hours. They say that it is not suitable for me as a woman,” Heba Al Badri says.

Much decided by family

At the meeting in Erbil, some of the participants presented small research projects that they had carried out. Heba Al Badri had asked 30 women in Basra about their freedom to express their opinions and what opportunities they have to take on leadership roles in society. One third of the women answered that they do not get to choose themselves whom to marry. 75 percent stated that their family does not allow them to choose their own education or career. About 50 percent said that misinterpretations of religion and/or societal customs prevent them from expressing their opinions.

Heba Al Badri’s own experiences of limits being put on her for being a woman, contributed to her choice of research subject.

“My friends and I can not express our ideas freely. We often get reprimanded by men in the community,” she says.

She would like to use the results of her research in a campaign for women’s rights, but the topic is sensitive, and she knows that she will meet resistance. She hopes that a future collaboration with Women’s Leadership Institute in Baghdad – which had representatives at the meeting – will help her to realize her ideas.

Mouna Salih Abed Ali is another activist who were in Erbil. She says that a lot of women are being held back in their activism by their families. This is something that she has experienced herself – her family stopped her from travelling to rural areas, where she used to go and help marginalized women. They think it’s too dangerous for her, since there has been a recent increase in rapes and kidnappings of young women.

“One of the most important issues to focus on is to increase women’s freedom of movement. Another one is to end violence against women, which is rooted in the fact that we live in a tribal society with traditional views on women’s roles,” says Freyal Abdulla Mousa, another participant at the meeting for young women activists.

In contrast to Mouna Salih Abed Ali, Freyal Abdulla Mousa doesn’t consider her own family an obstacle to her activism.

“I have an open-minded family that understands women’s rights. But in my work as a journalist I have faced violence in the streets. The bad security situation in Iraq is a threat to me. Many journalists become targets of violence and some have even been killed. But that has not stopped me, I am determined to continue my activism and my work,” she says.

Heba Al Badri, Mouna Salih Abed Ali and Freyal Abdulla Mousa appreciate the opportunity the Erbil meeting offered to get together with other young activists, build networks and improve their knowledge in international conventions on women’s human rights.

“Getting support from other women activists is really important in order to overcome the challenges that we, as women human rights defenders, face in society,” says Freyal Abdulla Mousa.