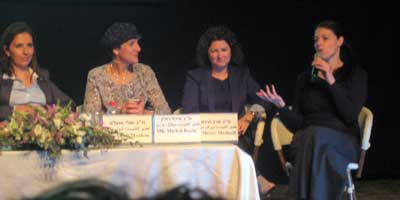 A Mandate to Include Women in Peace Talks

We gathered together on a pleasant morning, several hundred women and a few dozen men, for the hearing of the Women's Leadership for Peace and Security Project, which deals with the decision of the United Nations Security Council Resolution 1325.

This project aims to: Create a comprehensive action plan for the implementation of Resolution 1325 of the UN Security Council and adopted by the government.

Resolution 1325 urges all actors to increase the participation of women and incorporate gender perspectives in all United Nations peace and security efforts. It also calls on all parties in conflict to take special measures to protect women and girls from gender-based violence, particularly rape and other forms of sexual abuse, in situations of armed conflict. The resolution provides a number of important operational mandates, with implications for member states and the entities of the United Nations system.

A coalition of 30 Israeli feminist groups released "A Comprehensive Action Plan for the Application of United Security Council (UNSCR) Resolution 1325” at a public conference in Jaffa on Thursday, October 10th 2013.

They called on the government to include women from all sectors of Israeli society in peace-negotiation teams and other decision and policy-making bodies.

The organisations who initiated the project of creating the Comprehensive Action Plan were:

The event had been funded by several organizations, including the European Union, the Heinrich Boll Stiftung, the Dafna Fund, and US-based National Council for Jewish Women.

Many more organisations were represented in the steering committee including:

"Feminism is all of us.”

The day began with greetings by Prof. Ms. Hanna Herzog, head of the Gender Studies Program at the University of Tel Aviv and Director of Equal – Center for the Advancement of Women in the public arena at Van Leer Institute Jerusalem, who told us:

“It is a myth that women cannot cooperate” and that “1325 is a transnational political act, designed to blur the boundaries that feminism is all of us.”

Adv. Ms. Keren Shemesh-Perlmutter, director of the Itach – Ma’aki – Women Lawyers for Social Justice, told us how happy she was to be there and talked about Women, Peace and Security, and about participation of women and gender perspective at every stage of peacekeeping.

Minister of Justice: Cooperation Between Women in Parliament

MK (Member of Knesset) Ms.Tzipi Livni, Minister of Justice   opened the first session of the day.

She told about herself: she entered politics because she wanted to engage in the Israeli-Palestinian conflict, but not from the female point of view. Only later did she realize she must be committed to the advancement of women.

Within the process, she realized that so few women were in important positions in government, directorates, etc. She realized that without a law requiring appropriate representation of women, nothing happens.

Along the way, when she decided to run for prime minister, she realized that the real support she got was from women:

“It is a must to struggle [against] the approach that claims that women ‘cannot’”.

In 2008, she was the head of the negotiating team. She was happy.

“I was very much through many personal levels and it took me a while to understand that it is ok, that a woman in politics is not between being bitchier or being soft. I saw the difference in decision-making."

She called for encouraging women who represent:

“There is cooperation between women in the Knesset (Israeli parliament), despite differences and conflicts of political opinion.”

UN Special Coordinator: Women and Men Must Work Together

There were two male guests at the event.

“It is a challenge to harness the establishment to the struggle – the place of women in public discourse, in which only men talk about important things; ie: women do not have a say. Especially when it comes to war, peace, and security.

In war, it is more dangerous to be a woman than to be a soldier. The broad view that women have on security has been ignored, although they have knowledge in economics and law, and in international relations. I hope that the programme will end this inequality.

Women and men experience differently. They complement each other. And therefore must work together.”

The second man out of two among the speakers was Mr. Lars Faaborg Andersen, head of the EU delegation in Israel, He congratulated the women's organizations for the important and the inspiring initiative.

MK Ms. Zahava Gal’on brought with her the greeting of Mr. Ban Ki-moon, Secretary-General of the U.N., in a video:

Breaking Through the 'Brotherhood of Men'

“1325 is an important decision, but the responsibility is on us, the women. Our job is to break the brotherhood of men, and ask questions.

For example - the government approved budgets without question, out of male bonding. Women who are members of funds [committees] demand transparency.”

Ms. Vered Swed, Director of the Authority on Advancement of Women in the Prime Minister's Office noted and acknowledged the women's organisations who worked for two years for the conference. She said that Israel had been one of the first states to adopt part of the plan, but little has been implemented.

She described her work as a woman-mayor, the obstacles that were in her way. People tested her ability first as a woman only, then as a politician…and she succeeded to show them they were on the wrong way of thinking.

After a short intermission the first panel started.

The moderator was Prof. Ms. Naomi Chazan, dean of the School of Government and Society, College of Tel-Aviv, Jaffa, and co-director of Equal - Center of Advancement of Women in the Public Arena, Van Leer Jerusalem Institute.

“Women are part of the world. As long there are conflicts in the world, it is our target and mission to help resolving them.”

Prof. Ms. Frances Raday, Vice-Chairperson of the UN Working Group on Discrimination against women in law and practice, spoke about the importance of a decision in 1325 in the international arena:

”It took the UN 15 years to approve a committee to engage women as a power rather than as victims.

Women are more aware, being sensitive to disadvantaged groups: the poor, the elderly, migrants, victims of trafficking, etc. There is a growing lag in Israel versus other countries on gender equality. Israel sins in being lack of internalization of the decision”.

Founder of WCLAC: We Have a Lot of Work to Do

Ms. Maha Abu-Dayyeh, founder and director of Center for Legal Aid and Counseling for Women Palestine (WCLAC) told us about the challenges and dilemmas in implementing 1325.

Former Meretz MK Naomi Chazan noted that it took great courage for Maha abu-Dayyeh to attend the conference. Maha abu-Dayyeh carefully emphasized that she "represents only herself."

"I think that we women, Israeli and Palestinian, should begin to meet again, and we will. We have a long history of meeting together and we know how to do it. But first, each society must have peace within itself. We have a lot of work to do at home. That is my priority."

An honorable guest, Prof. Ms. A. Betul Celik of the Savanes University of Istanbul told us about her paper, Challenges in implementation of Resolution 1325 in Turkey: The Case of Turkey. She screened data, explaining every detail.

Ms. Rina Bar-Tal of the Israeli Women’s Lobby talked about the initiative of the women from the Middle East to promote Resolution 1325:

“There is much to learn from other countries how to resolve conflicts and how to give women a part in the process”.

On Life is a website [in Hebrew only] of content and current events for women. Its administration brought together a few women, and gave them five minutes each to speak about their personal stories.

All of them were women who reached far, who fought, and didn’t give themselves up, nor the others:

“When I cover soldiers’ stories, I see the eyes of the mothers”.

"Once a woman decides not to give up not the house work and not a career – that can be changed. A space which does not allow a place for women - is a lacking space.”

Amal Najm Abu Seif- Doctoral student at Ben Gurion University. Told us about honor killings, about the way of thinking, about the nature of honor.

Karnit Goldwasser, environmental engineer - talked about the right to choose.

Dana International, singer (transgender, born as a man) sang for us: 'Free like a river', and said: “The day women unite - will put an end to male power.”

“Discrimination against women is most acute, since women constitute 50% of the society...women juries contribute a unique perspective based on cultural access.”

“Why am I not a director of a public company...why I'm not living my earning potential?

Ruth Collian, who approached the High Court to call for denying funding to bodies who exclude women:

“Being a woman is not a disability – it is a privilege”

Several participants were asked to say what was on their table.

“What does Israeli law have to offer?” Dr. Ms. Yoffi Tirosh, Faculty of Law, University of Tel Aviv, and a member of the management of Imach –Ma’aki – Women Peace and Security Association

We had a long intermission for lunch. We used the time for socializing, getting know more women, met Facebook friends for the first time, and enjoyed the time.

Ms. Anat Thon Ashkenazi of Imach-Ma’aki – Women Peace and Security Association, project manager of creating an action plan for the implementation of Resolution 1325, spoke about the Five Recommended Objectives for a Comprehensive Action Plan.

Equal representation of women from all sectors of society in decision-making bodies and processes at the national and local levels.

“Equal representation means: equal numerical representation of women from a variety of groups in the population, including women discriminated against on the basis of religion, nationality, ethnicity, age, socio-economic status, geographical location, color, physical disability, etc. “

Gender mainstreaming all decisions-making and processes, at both of national and local levels.

“Gender mainstreaming is an action strategy for attending equality in political and public life” explained Anat.

The protection of women of all groups and all sectors of society, from all forms of violence in the public and private spheres. Anat emphasized:

”The protection of women from violence as enshrined in Israeli and international law, is based on the recognition of the fact that violence directed against women has clear and specific characteristics, and consequently, that a variety of clear and specific steps must be taken to uproot it out in all its forms.”

“The prevention of violent conflicts and the advancement of peace are dependent on nurturing the values of equality and tolerance, encouragement of active participation in society, inclusion of diverse social groups in the collective discourse, and the free expression of criticism and peaceful protest.”

Advancement of the Comprehensive Action Plan and implementation of Resolution 1325 in all government ministries and bodies.

“The Israeli Action Plan, based on the principles of Resolution 1325, lays out the desired course for action.

The framework includes: objectives for attainment of all the goals of Resolution 1325, indicators to measure progress in the achievement of these aims, the accountability of various government ministries in this process; and modes of cooperation between official authorities and society in general, for the realization of the aim of Resolution 1325”.

For the first time, five chairwomen of the Knesset lobby of the entire political spectrum were on one stage!

It was very interesting and inspiring to watch them talking together about controversial issues – keeping the discussion clean and neat, even when there were disagreements.

The discussion initially responded to a comprehensive action plan.   The audience was given the possibility to ask questions during the hearing.

At the end of the day, we felt very inspired.