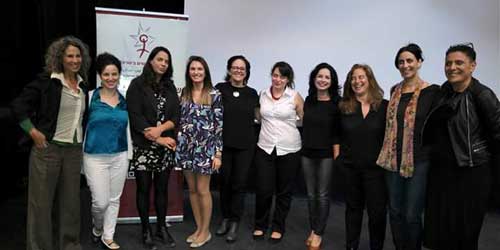 On violence and the freedom to choose

On the occasion of International Day for the Elimination of Violence against Women, the evening was organised with cooperation from "Israel Women's Network", on November 25, 2015.

The evening dealt with the least talked about aspect of violence against women: policing of the body.

Iris Kagan Hachmon, Advisor to the Mayor on the Status of Women and Gender Equality, opened the evening:

”We all believe that we are independent and decide on our fate; that's how we are taught to think, but at the same time we all take place within the mechanisms, some of which are visible and some hidden, which policing and reeling us into patterns of what is allowed and what is forbidden, what is proper and what is not, of what is feminine and what is not feminine – up to intimate places of weight, choosing fashionable attitude, of body hair and so on. It has been already talked of all the different types of violence – only this invisible regime remained in the shadows.

It is important to remember that what begins overt or covert violence against women – is violating society as a whole.”

Iris also spoke about the term 'freedom' – a very abstract term which describes the lack of constraints and the possibilities of actions that are not restricted. Thus, she said,

“We are all thinking that we choose, that we are independent, but in fact we are conducted in molds which dictates what is permitted and what is forbidden, what is proper and what is not worthy”.

“Seventeen women have been murdered throughout the last year – because they wanted to get divorced; because they had been accused of violating family honour; and more. An academic research by Dr.Abigail Mor, head of the gender studies program at the Academic College of Tel-Hai, Israel, says that policemen, police, and attorneys are infected with prejudice about rape. This is one of the reasons why women do not complain. Sixty women are complaining every day, but thousands of others are not complaining.

Only 2% out of the complains are false claims.“

Limor called on the audience to be sensitive. Not to be indifferent. To be activists. To be an example.

Alona Frenkel, media personality, moderated the evening. She asked, “We all stand before the mirror, see the white hair, the new wrinkle. What makes us choose what to do with it?’”

Michal Sela, Director General of Women's Network, spoke about the importance of this day which arises from the fact that data of abused women actually is unknown:

“Women do not complain. Violence is not only physical, emotional, financial, and [about] gender. It comes in many different forms. Women’s Network promotes women's rights legislation and an Open Line, [a telphone number 24/7 which women in need can dial and speak with well trained people. Not just emergency, but also to share, to tell, to ask questions], and seeks to influence the future of daughters and granddaughters – of future generations.

The Israeli Women Network believes in education. They believe that the change will begin in schools and kindergartens.”

Michal called men and women to join and be part of a supportive community.

Dr. Shay Froogle, Ph.D., teaches philosophy and rhetoric at Tel Aviv University and in the Law School of the College of Management, and was the only male speaker in this evening.

Following the book by Simone de Beauvoir, The Second Sex, he tried to draw , historically and philosophically, the route which led the women to inferior status in society, and tried to answer the question: why do men allow themselves to be violent towards women, and how have women allegedly shared in collaborating with oppression?

He talked about women who do not necessarily change their societal assumptions, and sometimes justify the system – which does them an injustice.

“To get to emancipation, women need to understand that what is perceived as natural is   just historical-social. Only such recognition can release women,” he stated.

“Victimization discourse argues that there is something comfortable about being a victim. On the other hand, it's cruel to say this to the victim.”

He quoted Jean-Paul Sartre, who said that women are “doubtful are victims, doubtful are collaborators, they are like everybody”.

“The victim is also collaborator”, he added. “How is that?”

By allowing men to treat women as less valuable by paying them less for the same work, by considering women’s time as less important, and by not treating women as equal human beings.

Shay accompanies his wife and daughter in feminist activities; he said he believes very much in the activities of women.

Speaking from the Field

An impressive array of women leaders in their fields, spoke for 10 minutes each:

Dr. Tamar Sagi talked about Reification Theory which says that society examines women's bodies under a magnifying glass, and that reference to the female body in Western society is treated as an object. She said,

"Unfortunately, the cultural message transmitted as a result of the constant criticism towards the value of women’s bodies is determined according to how they look.”

She gave an example of the advertisement of ketchup brand's advertisement, describing a table with food: At the table, a man – who eats with much delight the food with ketchup, and a woman who is just there, like a decoration, without any role. Just present. A large ketchup container is between the woman and the man who is eating.

Media / society looks at women as objects, so a woman sees herself as an object: how do I look on the outside? Women undergo surgical procedures to look better, to feel better about their appearance. But – this is the internalization of cultural treatment which dictates how women should think about what’s more important – how the body looks or how it feels.

Dealing with the female body – means reducing the 'ME'”.

She asked the men:

“How does it happen that you men are using the organ of love and passion and of fertility, to impose coercive terror, violence, fear and pain?”

Shira Richter, international artist, founder of the Facebook page "Gender Studies in Education, talked about the most important lesson that is not taught at school: how the body into which we were born dictates the world the way we are experienced.

When a man murders because someone called him “woman” – this statement hurts both the man and the woman, that by using the term “woman”, he was hurt.

Reut Guy, legal expert, social activist, director of Girls’ Field at Elem Association works with young people. She said she’d like the youngsters in the world of prostitution to stand on the stage to tell their life stories:

“They do not define themselves as prostitutes. This is society’s definition, of us – the normative people.”

She talked about prostitution, and the common myth about women involved in prostitution by free choice:

"This myth arises with two opposing positions: If we say that these women, who choose to sell their bodies, do not choose it actively and completely, then by this statement we deny them the control over their lives, and therefore we reject also the hope for a better future. On the other hand, is a real free choice given when the basket of options is so limited choose from?

Prostitution is the world's third largest industry. The average age to begin is 12-15 years old. There is always the question: What is the alternative?

When a child complains – they take her out of the house, instead of the offending person. Then, she prefers the freedom and comes to prostitution. Prostitution is a survival strategy: fast money is available and it might pull them away.”

Anat Zauberman, creative actress in the play: Seeing the Feet, performed a monologue about stereotype of men and women.

“The usual stereotypes in our society about men and women paints a clear picture: Women who are oriented toward 'community' more than men are perceived as not selfish and as care-taking and less assertive than men are, and with less motivation to reach positions of power."

She screened a video of herself conducting; the maestro said:

“I do not want to be considered a chauvinist, but when I see you conducting – I see a woman.”

Yael said that it is a constitutive statement, because it tells about man; it is as if the maestro said: I use to see man on the podium; you (woman) are disturbing me.

It is her choice, she said, how to stand on the podium – softly leading the music.

She called woman of all positions – to put on a different spirit, to show feminine solidarity, to be a woman supporting every woman.

Dr. Inbal Vilombski, lecturer and researcher at the Hebrew University of Jerusalem, talked about the need for female solidarity as a lever for social change.

She spoke about 10 Principles of Aid to people in need:

Attorney Keren Geenblatt, legal counsel in Israel Women's Network, quoted a line of an Israeli song: “When you say ‘no’, what do you mean?”  At the time, this song brought public echoes and criticism by women and was also a reference in court. Keren’s words of defiance also dealt with a famous gang rape case, and considering the question of free will and its meaning.

She said that there must be rules that are very clear of what is allowed and what is forbidden. In a scene of a night club, darkness, alcohol, noisy music, young atmosphere – all this gives the feeling of no limits – as if anything can happen.

“In Tel Aviv, the municipality has started a project of training of employees on the subject of sexual assaults, including rules relating to respond to the complainant.

No more: you are guilty, what did you wear, what did you say, maybe you got confused, what are you complaining about just now, why now – all those are a tractate [treatise; essay] of suffering that women go through, causing them to shut up.”

The evening ended with a good feeling: that women leaders have drawn a fierce struggle on behalf of women, and know how to recruit more female and male forces.

http://en.elem.org.il/   - ELEM was founded with the goal of assisting youth at risk and in distress, extracting them from their situation and helping them find their place in society as adults and citizens who are self-sufficient and contribute to their families and Israeli society.

Established in 1984, the Israel Women's Network (IWN) is a nonpartisan civil society organization. The mission is to advance the status of women in Israel by promoting equality and diversity via a range of innovative projects and programs. The realization that women are discriminated against, regardless of their race, religion, social and economic status, brings together a diverse group of Israeli women from different sectors.