Men Breaking the Cycle of Violence in Israel 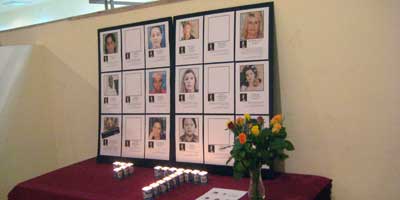 IN MEMORY OF THE VICTIMS

In 2010, eighteen Israeli women were murdered by their spouses or family members. This is the highest number since 2004.

Each murdered woman carried a world of wishes, hopes, aspirations, loves, and dreams in her soul.

Each murdered woman has family and friends who are mourning their loss, and carry her memory in their hearts.

Each murdered woman was a human being.

Hundreds of thousands of women in Israel are routinely exposed to some kind of violence: physical, sexual, emotional, verbal and economic.

Many find it too difficult to access resources, or find the personal power to escape the cycle of abuse and exploitation, and so carry physical and emotional wounds for the rest of their lives.

On the 1st January, 2011, a group of 9 men gathered at the Dizengoff Centre in Tel-Aviv.

The men are members of the Movement for Equality and Peace Between Genders.

Their goal is to change public discourse about violence against women.

They were joined by 40 more people.

Next to the wall was a board with photographs and details of the 18 murdered women of 2010.

On the table were candles in the shape of the Hebrew word for "Enough".

Together, the audience stood for a minute's silence in memory of the murdered women.

A large red banner on the wall inside the Dizengoff Centre declared:
Enough of Violence Against Women!!!

“Today we start counting back to 0"·· (zero murdered women)

"Prevention saves blood and money" (in Hebrew there is a similar term for the two, literally: blood and bloods)

Men wore tee-shirts with the slogan "This is how a male feminist looks” and were joined by their spouses and other women who came to listen and to support the protestors.

The message throughout was:
this inhuman phenomenon must be stopped! There must be an end to violence against women!

Until now, most protests of this nature were held by women; women's organisations, Knesset's female members, women in academia, and women in communication.

Rarely were men's voices heard, as if this issue was not in the interest of men at all.

“The pain is recycling itself generation after generation”.Men's participation in this public discourse is incredibly important, not only because they make up half the population, but mainly because it is a social-gender phenomenon in which men have a special responsibility to initiate prevention.

It is important to make it clear that no form of violence is acceptable.

It is just as important to highlight the fact that a violent man is coming from a position of weakness and helplessness, not from a position of strength and power, and that there are ways to help and assist him before he raises his hand.

It is also important to point out that many men who batter women were themselves victims of violence.

THE MAN BEHIND THE INSPIRATION

Aviv Yahalom is the man who initiated the idea:

"Today something important happened in Israel. Katzav – the former President of Israel was convicted of one of the vilest crimes – of rape!

We are here now, to announce of the right of all women to their bodies.

Here and now, we want to talk about social change and to take responsibility for a process of transformation.

18 women were killed in Israel last year – not by strangers, but by their own spouses or family male-members".

He spoke about the 83 "Violence Prevention Centres” and the fact that there is no national plan to prevent violence. He feels that there must be a plan focused on men to educate and to help those who need it.

FATHER OF MURDERED VICTIM SPEAKS OUT

The stories of battered women were told: some of them of women who succeeded in breaking the cycle and survived, and some of women who couldn't.

Sheik Amin, from the Druze village Yarka, told us about his daughter, Manaar, who was murdered by her husband in 2009.

"There is NO excuse for murder. There is no such a thing as a ‘murder for family honor’ - not in any religious law".

Sami Michael, famous author and President of the Association for Civil Rights in, Israel said:

"Manaar means lighthouse. May her story be the light for the right path.

The fact is that violence against women is done by men. Men should take responsibility to prevent this. We extend our call to men – Come on, let's find a solution together."

BREAKING THE CYCLE OF VIOLENCE

As the son of violent family, Oded still remembers the horrible beating that his father gave his mother and himself.

"From an early age men have been taught that they are not allowed to ask for help in distressing situations."He can still visualise the horror.

Choked with tears he told how, with determination, he suppressed his emotions and finished high school.· He then went on to university to study Social Work with the hope he could help others.

He married and managed a normal life but still carried the demons deep inside. He didn't realize how much violence was stored in him, until the day it broke into his marriage.

Luckily he has a kind, loving, caring, strong woman for a wife. With her support, he took two years leave from work and started therapy.

Being a professional helped him to ask the right questions, to go through a painful process, to live with the pain and to break the cycle.

Now Oded is working to help others, richer by his own experiences.

Yair is working to encourage men and women to tackle the issue together, hand in hand.

“The pain is recycling itself generation after generation”.

He calls men to join - to get help, to learn other ways to live, without violence.

Everything Begins with Education

Educate the victim who thinks, "It is understandable!"
Do not say: "He loves me so"
Do not think the blame lies with you
Keep your soul…

Educate the neighbors - yes, us – all of us,
Do not close the door on neighbor's face
To lay battered and suffering…

Educate the policemen who received complaints
Do not say "Never mind, silly"
Listen to her carefully,
Read the situation correctly
Be aware to her stress…..

Educate the judges
Yes, it should be said,
For responsibility - nobody has an exemption!
Make justice explore the truth….

It is not simple - to  fight violence.
The way is far ahead - to eliminate the blow…..

Not easy but possible
Open up for a new tomorrow
Of less violence and more safety
Of less tension and more joy…..

I chatted with the gentleman standing next to me, Oded Suchard.

He said this was the first time he felt good at an event like this. “Usually most of the audiences are women.· It feels very supportive to have so many men here.”

I introduced myself to Oded and told him about advocating for women and about A Safe World for Women.·

I asked him if he would tell me his story.

He was married with two children, who were six and four years old when he divorced. Their mother met another man and lived with him for a year before she realised he was violent.

She tried to leave him. For an entire year she filed complaints with the police who failed her with their incompetence.

After a year she was murdered by her new partner.

The children found her.

Oded spent 4 years raising his children as a single parent·

He is now remarried and together, he and his new wife, raise and support the children who are aged now 14 and 16.

They all receive professional training and support from the Welfare Authorities.

Oded is very optimistic about his children's mental and emotional health.

He says that his wife is a wonderful person who is very brave to deal with such an issue.· She is also very wise and with the professional help they are given, they all have reasons to survive this trauma.

On saying goodbye, he handed me a poem.·

Oded had written the poem in 2007, in memory of his murdered ex-wife.

To add a word or two to Oded’s optimism, I say:
With a father and man like him, his children are in the best caring hands.

THE MOVEMENT FOR EQUALITY AND PEACE BETWEEN GENDERS

"First of all – to let the men's voice to be heard in a way it never has and to spearhead public actions to eradicate this phenomenon in all its aspects.

We believe that the act of treatment and assistance to victims is blessed, but it is of utmost importance to also have a system of prevention.

We believe that violence is rooted in weakness and distress and helplessness.  Men are violent because of life-circumstances, such as employment difficulties, loss, personal crisis and violent family backgrounds. From an early age men have been taught that they are not allowed to ask for help in distressing situations.

Men are prisoners of a social perception which establishes the character and roles of men in family and society rigidly. This perception justifies the superiority of man to the woman, making her the available victim for acts of violence.

That is why it is so urgent to have a plan to support men in distress who are the ‘violent-to-be’, to take them out of this difficult cycle before they try to find their own solutions in violence.

The State should establish a support frame, a system in cooperation with the Police and Welfare Office.

The State should increase the number of male social workers and hold training courses on gender issues for all."

Participants were encouraged to sign a petition to end violence against women.

More about the event (in Hebrew):