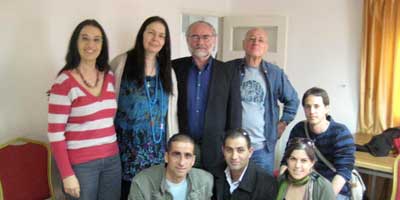 "While in a conflict, one doesn’t see the other as a human being. Something in the brain is blocked, one sees the other just as an enemy. One must be meeting the other side to understand". Pat Magee.

She learnt more and more about the conflict and since then, she has visited Ireland many times and worked with victims and former combatants from all sides. In November 2000, she met Pat Magee, the man responsible for her father’s death.

Belfast-born Pat Magee, former IRA activist, was given multiple life sentences for the Brighton Bombing. Released under the Good Friday Agreement in 1999, he has since been actively involved in peace work.

Israeli and Palestinian citizens met with Jo and Pat for an inspiring afternoon. The meeting was initiated by Combatants for Peace.

Jo told us about the inner power one must have to be able to listen to the enemy’s story, and to open the heart to understand his motivation. She went to Ireland to meet people who had been involved in the violence.

She was hoping that something positive would come out of the trauma, and she tried to understand the life there; she realised how even being English –  rather than Irish, was an obstacle when she tried to communicate with people.

It was not easy to listen to the stories of the people from the IRA, the organisation which was responsible for her father's death.

She was speaking of forgiveness and understanding. Once, after talking on BBC about that, she was shocked to receive a death threat from a man who said she had betrayed both her father and her country.

Jo's life dramatically changed when under the Good Friday Agreement prisoners release –  among them was Pat Magee. She wanted to meet him, to see the human being behind the enemy.

At the first meeting she was terrified.

She was waiting for the knock on the door … She didn't know what she would tell him. In that meeting she told him a lot about her father. He told her his story. He said that he wanted to listen to her, to her anger, and asked how he could help her. She acknowledged his courage to meet her.

Jo spoke of “recovering some of the humanity she lost when that bomb went off” and that “Pat is also on a journey to recover his humanity.”

During the past years she understood that no matter on which side of the conflict one is – all had lived each other’s lives, they could all have done what the other did.

Although he has met with Jo for over 12 years now, Pat still feels it is difficult for him, because he killed her father. He too still remembers their first meeting, him being quite terrified -- thinking how he would be able to explain to her what made the IRA decide to kill her father.

Pat is not seeking forgiveness, but understanding.

Opening hearts - 'Jo's deep listening dismantles me of my weapon'

Jo wanted to understand. He found her very attentive, with a genuine will to understand. So he told her how he’d got involved in the armed struggle at the age of 19, after witnessing how a small nationalist community was being mistreated by the British.

“Jo's deep listening dismantles me of my weapon. I felt not protected. I felt I wanted to express something deep in my heart, to say I'm sorry”, said Pat.

After several weeks, he understood that there was a lot more to say. That they needed to meet again and again. He learnt to listen to Jo talking about her father. He thought about the British who had been the target. Not her father in person. Pat knew nothing of him. Jo’s father wasn’t his personal target.

While in a conflict, said Pat, one doesn’t see the other as a human being. Something in the brain is blocked, one sees the other just as an enemy. One must be meeting the other side to understand him, in order to be able to solve the conflict.

“Have I forgiven Pat? I do not know…I am still angry…it is a journey of understanding and reconciliation. The pain always is there. I am thinking of the global family, so I dedicate my time for the world ‘peace not only of myself.

If Pat wouldn’t admit and understood my father’s killing –I wouldn’t do all this.

“It is difficult. We haven’t reached the end of the journey. We are still checking and testing. The differences are big.

Although I work for peace, I do not think –as Jo does- that the non-violent way is always possible.

We had been violent because we were weak.

We didn’t know how to listen, and no one listened to us… Jo showed me full trust even though I was the one who killed her father.

Despite disagreement –we can talk. There is no recipe for the success of the journey of reconciliation and understanding.

One must be listening! Be opened to the other! Must create dialogue!