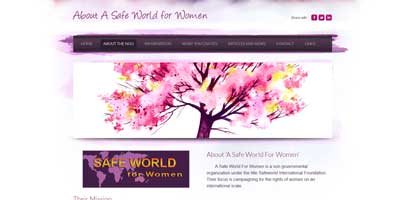 Canadian Students from Kitchener, Ontario, won a school competition by creating a website and video to raise awareness about Safe World for Women.

The school raised $120 for the organisation

They also wrote the following essay:

The issue surrounding violations of women’s rights is a severe one. It deserves to be recognized so that action can be taken. By volunteering or giving funds to organizations that are active in supporting international women’s rights, it can be possible to make the world a safer and fairer world for everyone. Safe World for Women [The Safeworld International Foundation] is one such organization. They work to make positive changes in the lives of women everywhere. This is a worthy issue that truly deserves everyone’s attention because they are working to create equal rights for all, there has not been enough progress in the past thirty years, and the company works closely with grass-roots programs and field partners.

The Safeworld International Foundation’s objective is to do everything they can to make the world a safer place for women in any way possible. They empower women across the globe socially and economically, by being closely related to women in their grass-roots partnerships. Issues that are currently a large focus for Safe World For Women are trafficking, slavery, domestic violence, poverty, honor killings, and social exclusion, as well as countless others. These issues largely affect women all over the world, even first world countries.

Two and a half million people in 161 countries are affected by human trafficking. This has an impact on every continent and every kind of economy. A large majority of these victims are women, who are then sexually exploited. Also, over twenty thousand women around the world are killed each year because of honour killings. This is solely due to the fact that the women have done something to “dishonour” their family. This could be simply from wearing clothes that are not approved of to falling in love with a man that is not their arranged husband (Fisk). A very small percent, one in eight men, is actually charged for these murders because they are staged as suicide often times. It is horrendous to think that in this day and age, women are still subjected to this treatment. This is why women's rights groups are so important. Not only do they allow women to speak out about their personal experiences of violence and hardship, but it also provides a structure to create visions as well as concrete ideas on improving the lives of everyone. Living in a first world country such as Canada, it is especially difficult to imagine the injustices that millions of women face every day.

The work of organizations such as The Safeworld International Foundation makes it possible to imagine a world in the future that has abolished these violations of women’s rights.

There has been a lack of progress in women’s rights in the past thirty years. The Convention on the Elimination of All Forms of Discrimination Against Women, known as CEDAW, is an international treaty that was signed to bring about positive changes in the lives of women everywhere. It has been effective since 1981, yet there has been relatively little progress made in those thirty-one years. There are still many women all over the world that do not have their rights recognized by law. Until 1979, when this treaty was first adopted, there was no document that addressed women's basic human rights in political, cultural, economic, social, and family life. The Director-General from World Health Organization said, “We will not see sustainable progress unless we fix failures in health systems and society so that girls and women enjoy equal access to health information and services, education, employment and political positions” (Chan). There are many positive aspects of this treaty, like promoting girls' education, improving health care, and improving the lives of women at work, but the treaty does not impose any laws on governments. Until a set of international laws are put in place, there will continue to be no improvements in the lives of women anywhere. Until laws are put in place, women's rights organizations like A Safeworld for Women need to be supported so that they can protect women from the numerous problems they are facing.

Safe World For Women takes pride in the relationships they have built with grass-roots partners and women in field programs around the world. This is a vital element of the organization’s belief system. They feel that by developing close relations with women all around the world, they can change their lives for the better. By listening to women who are faced with different hardships, they ensure that “the voices of the silent are heard by those who can influence change” (Safeworld International Foundation).

What Safeworld International is doing is much different than other organizations of their kind. Instead of being based and working solely in one country, they are based in the U.K, but work with women from countries everywhere, especially in Asia and Africa. The grass-roots partners appreciate the help that they have been given through their partnership with Safe World For Women.

Young Women for Change in Afghanistan says, “Using Safe World for Women’s website, connections to media, advocacy, and social media activism, we have been able to not only raise voices but also engage women outside Afghanistan in a discussion about our lives to increase support for our work and solidarity among women across the globe” (YWC).

Safe World for Women has provided many of their grass-roots partners with opportunities that they would not have otherwise had. COFAPRI (Congolese Females Action for Promoting Their Rights) said “The idea of founding our project was nurtured in November 2009 as to bring assistance to DRC (Democratic Republic of the Congo) illiterate village women and girls. The inspiration came from the contact we were having with Safe World for Women.” This just goes to show how much impact the organization has on their partners around the world, which is an integral part of them making positive changes in the lives of women.

Organizations like Safe World For Women deserve to be supported because they are working to create equal and ethical treatment for everyone, in general there has been less progress than expected in women's rights over the past thirty years, and Safeworld works closely with grass-roots programs and field partners. This organization deserves the attention and funding of people everywhere, because the goals they are working towards are truly remarkable.  It can be hard to picture a world where women are free from the atrocities they are currently faced with, but with the assistance of organizations like Safeworld International, it can be possible.

You can see the inspiring website made by the students here