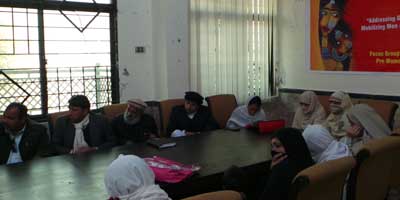 A total of 261 civil society representatives including NGOs, CBOs, alliances, UN agencies, political activists, journalists, international NGOs, lawyers, housewives, teachers, labour union representatives, men from the community, labourers, and students participated in the FGDs, which included 180 male and 81 females who participated. The FGDs aimed to review the impact of existing and pending pro-women legislations and identify the gaps in these legislations.

Like the previous FGDs in the first quarter the focus group, discussions of the second quarter strongly reflected that the civil society actors who are engaged in the promotion of rights and working to reduce violence against women (VAW) and sexual and gender-based violence (SGBV) do not fully understand or own these laws and criticise them – and it is a major reason that they fail to play the watchdog role.

Lots of stereotyping exists among the civil society on the role of women in society, which contributes as an obstacle and challenge when it comes to providing rights given to women in the constitution of Pakistan. For example, journalists and lawyers and even the NGO workers are not gender-sensitized and often gender blind; therefore, they become part of the problem rather than the solution.

There is a strong sense among community that the pro-women laws that exist in Pakistan are not culturally suitable and that no consultation is made at the grassroots level with different sections of society or CSOs before these laws are pushed into assemblies.

The FGDs gave a strong reflection that the relevant segments of the civil society sees serious gaps in the pro-women laws; the majority of them are not fully aware of the laws and most of the actions taken by the civil society address practical gender needs. Also, there are rare actions by CSOs which address strategic gender needs of the population, especially in regards to sexual and gender-based violence.

The opinions, comments, and concerns presented by the participants of the FGDs provided a fair sense that civil society actors believe that because people of Pakistan live in a world which is structured by strict religious family and tribal customs, the laws which protect them should be well in alignment with these challenges – otherwise it will not yield the desired impact level.

They were of the view that women who face SGBV do not take the remedies offered by the laws because it is against the community stature and further subjugate her to the chains of violence and this is the reason that most of the women chose to remain silent.

Failures of the Existing System

The participants suggested that the process of law-making should be need-based and shoulder the capacity to address the issue in totality.

Half-baked solutions by the NGOs and legislation by the government – which remain only in the books of law, never provide relief to women in distress. The participants also expressed disappointment that NGOs as well as government have no programs to address the sexual and gender-based violence faced by men in society, while they also have strong assumption that laws made/amended in relation to women is under international or civil society pressure – and rarely did the government take any initiative itself.

Most of the laws are only made to gain political mileage by the governments.

CSOs also expressed concerns that NGOs make lot of efforts to bring new laws but they have little attention towards the issue that laws that exist are implemented or not, and therefore are equally responsible for this deteriorated situation. Civil society representatives expressed disappointment and concern that despite the fact that Pakistan is one of the most heavily legislated countries, the citizens of Pakistan do not get justice; dozens of laws and the constitution of Pakistan guarantees equal status and protection to women of Pakistan, but still they are vulnerable and the large majority of them are voiceless as well as the fact that major portions of the legislation remain non-effective.

The participants expressed their views that because there is no demand from women unanimously for the implementation of these laws, therefore governments do not take the issue very seriously.

NGOs have implemented thousands of projects around the country on SGBV but there are fewer examples of community-led actions and therefore, the NGOs working with women need to change or improve their strategies. Most of the organizations across Pakistan work on awareness-raising and very little is done when it comes to give practical help to women in need like legal aid and shelter services. The participants gave an example that there is only one private shelter in KP, and lack of protection services and structure reduces the impact of all the resources which is put into the awareness-raising.

There is very little experience sharing practise and channels among CSOs; most of the work is done is isolation which is also a challenge and this lack of coordination affects the target population and beneficiaries.

The participants of the Focus Group Discussions also recognized gender-blind Jirga system as one of the major challenges to the access for justice for women.

They believe that because women have limited mobility to the formal justice system, presence of parallel legal system in Pakistan is a contributing factor which leads to the injustice, inequality, and violation of fundamental rights. The established different courts and forums under Common Law, Sharia Law, and Tribal Law – and all of them parallel to each other, sets paths towards an unequal and unjust criminal legal system. Moreover, the presence of informal justice system, known as Council of Elders has led to certain inhuman decisions.

The FGDs also reflected that a considerable portion of civil society is gender-blind.

During the FGDs, several civil society representatives expressed their views that NGOs of Pakistan should not raise controversial and non-issues which reduces their legitimacy among community and civil society. Some of the examples of the controversial issues by these civil society representatives were issue of polygamy, child marriages, reproductive rights, abortion, family planning, blasphemy laws, and marriage by choice. According to the comments made, these are sensitive issues and all such issues which are interlinked with religion and belief should not be addressed by NGOs.

In support of their argument, they provided the example of the Council of Islam Ideology (CII), who recently made a statement that the law seeking consent from first spouse for a second marriage is un-Islamic; Sharia does not bind a man. The council discussed Islamic Family Laws 1961. The CII declared one section of the law un-Islamic under which a man is bound to seek approval from first wife in black and white for second marriage.

Similarly, the Islamic Ideology Council (IIC) ruled that Pakistani laws prohibiting marriage of under-age children are un-Islamic, the CII said there is no minimum age of marriage according to Islam.

These statements from Islamic Ideology Council (IIC) were highly criticized by CSOs but they were enjoyed and appreciated by general population.

Confusion About the Laws

The participants of the FGDs in the second quarter also raised the issue of branding and showcasing of women laws as one the area which causes confusion among the general population about the laws.

Some of the relevant examples provided by the participants of Quarter 1 and Quarter 2 are compiled below.

The Biggest Challenges to Implementation of Laws

The participants of FGDs identified the following as the biggest challenges in relation to the implementation of the laws related to women in Pakistan and access to justice:

Following are the recommendations by the participants of the all focus group discussions: