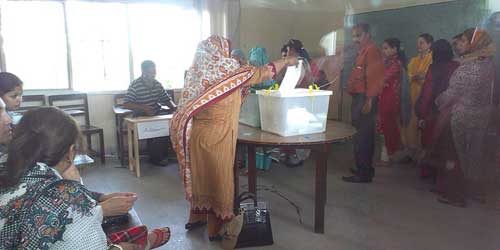 The practice of barring women to exercise their voting rights has been going on for years in several parts of Khyber Pakhtunkhwa – including Peshawar, where conservative tribal customs support this ban and women are traditionally kept from voting.

Normally in every election, workers of political parties take the ID cards from female voters and cast their votes according to a formula agreed upon by all contesting candidates. This is a common practise in every election, especially in the rural areas where the polling stations are controlled by influential candidates

Barring women from voting is a violation of basic rights. Blue Veins and the civil society of Khyber Pakhtunkhwa called on the government to ensure that women would not be barred from voting in the local government election of May 30th, 2015 and the district election commissioner should not make concrete steps in this regard.

During 2013, general elections women voters were not allowed to cast votes in several areas of Khyber Pakhtunkhwa and some written agreement have also surfaced but despite no action had been taken by the authorities.

Two all-parties roundtable meetings of political parties were organized in which political parties were mobilized to protect the women’s right to vote. After successful mobilization encouragement, the political partitas including Awami National Party (Wali), Pakistan Tehrek e Insaf (PTI), Awamai Workers Party (AWP), Jumeiat Ulema e Islam (F), National party (NP), Pakistan Muslim League (N), Jumat e Islami (JI) and Pakistan Muslim League (Q) have signed declarations that their parties will not become part of any such agreement or arrangement which will stop women from voting – and that their parties will use their influence and position to support women’s right to vote.

It was first time in the history of Khyber Pakhtunkhwa that political parties jointly signed a deceleration to support women’s right to vote.