Despite Tragedy, SAWERA Determines to Continue Serving the Community 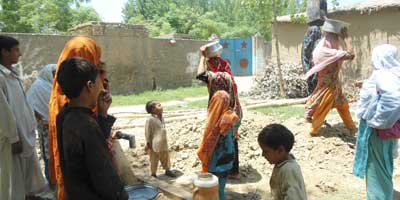 On 4th July 2012, SAWERA co-founder Farida Afridi was murdered on her way to work. SAWERA and its many supporters around the world have been shocked and grieved by this tragedy.

The incident of Farida Afridi's murder affected the organisation's activities for a short time.  But SAWERA is determined to continue its work; for an alternative solution, Ms. Hina Gul has been appointed as Human Resources Manager, and she has become part of SAWERA management. 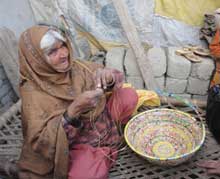 Noor MahalaNoor Mahala, 61, is unmarried and a resident of village Shagai, of Union Council Mirza Dher, District Charsadda. She has lived a miserable life after the death of her parent.

Since the death of her parent, she alone has been looking after herself and is dependent on her nephew for shelter. She is blind and unable to cater the needs of herself alone, and to worsen matters –  her house was damaged due to the flood last year.

Lack of eyesight and increased age are the main factors causing Noor grief about losing her capacity to make baskets, her only source of income. She is also contributing this income towards the nephew's household income. Noor has become quite anxious about the future.

Noor has tested all her relatives, but she could secure no support from anyone. She has realized that she cannot go ahead and make any progress until she herself does do something. Lessons that she has learnt after the death of her parent generated in her a commitment and made her ambitious to do something.

“Community service and involvement by SAWERA is really appreciated. Through financial and moral support, it allows people and their families to stand on their own feet."  – Noor Mahala

Under a project funded by CARE International - “Integrated Humanitarian Assistance for flood-affected populations”, SAWERA initiated an assessment of the area to identify beneficiaries.

During the assessment survey, Noor Mahala was identified and registered for a cash grant support. SAWERA made appeals to the government and other agencies to provide cash grant support for the purchase of materials needed for making baskets for her livelihood activities.

She has now received the cash grant of 20,000; this will contribute towards her income-generating activity to sustain her life.

Noor believes that the support has not only helped her to revive her livelihood activity, but also that she can also attain food self-sufficiency.

“Each time you can do some kind of services for someone, community provides the opportunity to learn new ideas, discover new perspectives, and grow as an individual independently”, says Noor.

Through the following interventions, SAWERA has strengthened its organisational roots at the community level, and has also interacted with target beneficiaries.

Besides this,19,552 people – and especially women, have benefited from the overall project activities.

SAWERA has achieved the following targets: