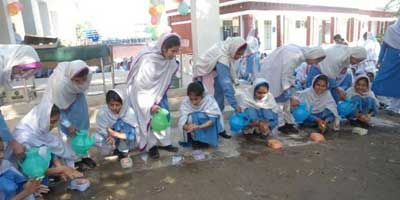 Global Handwashing Day (GHD) is a campaign to motivate and mobilize millions around the world to wash their hands with soap. It takes place on October 15 of each year.

The campaign is dedicated to raising awareness of hand washing with soap as a key approach to disease prevention.

Importance of the Movement

SAWERA's celebratory cake, for the end of the session.Hand washing with soap is the single most effective and inexpensive way to prevent diarrhea and acute respiratory infections (ARI), when it becomes everyday behavior performed in homes, schools, and communities worldwide.

Pneumonia, a major ARI, is the number one cause of mortality among children under five years old, taking the lives of an estimated 1.8 million children every year.

Diarrhea and pneumonia together account for almost 3.5 million child deaths annually, according to Child Survival UNICEF (The State of the World’s Children 2008). Making hand washing with soap into an everyday habit before eating, and after using the toilet, is estimated to be able to save more lives than any single vaccine or medical intervention.

Hand washing could cut deaths from diarrhea by almost half and deaths from acute respiratory infections by one quarter.

The event formally started with the recitation of Quran. After that, the team members, comprising of members of SAWERA and CARE International in Pakistan, introduced themselves.

Details of the Event

The programme started at 10:30 am and ended at 1:30 pm. The main objective of this training was to give children the message that hand washing needs to be repeated several times throughout the day, especially before lunch and after using the restroom/lavatory. Students were taught that germs are so small that you cannot see them and they can be found almost everywhere. Washing your hands can help to get rid of germs and prevent people from getting sick.

After the recitation, the proceedings of the programme began and all of the staff members introduced themselves. Miss Seema, DLO from SAWERA began by introducing the SAWERA team and warmly welcomed the participants.

Miss Seema then started with a presentation which pointed out the importance of hand washing and its crucial role in disease prevention.

A hygiene session was delivered by throwing light on the ‘five critical facts’ everyone should know about washing their hands.

Then followed the practical demonstration on how to wash your hands properly. The five facts are as follows:

Seven ways of washing hands was practically demonstrated to students. The technique is to use warm water (not cold or hot) when you wash your hands. Use whatever soap you like. Antibacterial soaps are OK to use, but regular soap works fine. Work up some lather on both sides of your hands, your wrists, and between your fingers. Don't forget to wash around your nails.

The participants listened to the directions demonstrated by Seema, listening intently, and noted down all the important points with regard to the indispensable significance of the training.

An activity was conducted by the students, focusing on how germs which we cannot see can cause severe problems.

The importance of hand washing was highlighted by mentioning that illnesses and diseases caused by bacteria and viruses can be very serious and can even cause death if not properly treated.

The main theme was to look at the difference a family can make by adopting safe rules of hygiene in keeping away various diseases.

Another activity was arranged by involving children in hand washing activities and then to asking them different questions.

Some examples were: “Why isn’t it enough to wash with water alone?” “What are the 'critical moments' when hands should be washed with soap?” “What is the 'correct' way to wash hands?”

The day had enhanced their awareness of the importance of hand washing activities.

At the end, a cake cutting ceremony was done. Miss Irum, PM of SAWERA, distributed gifts among the successful participants of the programme.