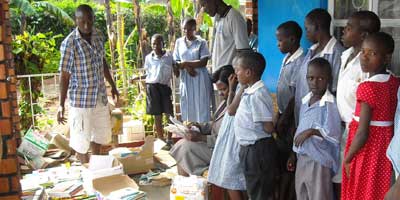 How We Are Funded

URICT depends on the love of its well-wishers and friends, as it has become increasingly hard to get support from foundations and funding agencies.

Over the years, URICT has been trying to become financially independent and sustainable, but owing to the present economic trends in Uganda this has become a challenging task.

As a registered organisation, the government further gave us a permission to open up a fully operational orphanage children’s home for HIV/AIDS orphans. The orphanage owns 283 acres of land. Currently, URICT is looking after 50 HIV/AIDS orphans and we have eight volunteers who help me on the daily basis.

Over the last five years, fistula in Uganda has stagnated at 6.4% among women between 14yrs – 44yrs, and in Kamuli, a slight rise in has been recorded in Buyende. Fistula in Uganda among rural women is growing fastest especially in villages where there is no nearby qualified health workers and medical services. The groups facing fistula includes women, teenage mothers and younger girls above/below 18 years.

Using participatory, culturally adapted and gender sensitive approaches, this project will address these gaps by reaching out to this hitherto underserved group with culturally relevant and appropriately tailored Fistula and Maternal Health Problems (FMHP) messages and services.

The main approach will be to integrate fistula as part of a comprehensive reproductive health package to the target population. URICT-Uganda in collaboration will carry out the interventions with its partners. They will include culturally sensitive information and behaviour change messages on safer sex practices, services to address gaps in Fistula management/treatment, refer women with fistula to get treatment in Kamuli Mission Hospital, family planning. URICT is a proven leader in SRHR in Kamuli Eastern Uganda, and its static Rural Health Center in Kitayunjwa Sub-county, Busota Village, and Kamuli District will act as focal points for accessing care and delivering services to communities that are more distant.

Fruit Growing for Nutrition and Income-generation

Only 50km from Jinja, Bukyerimba itself is poor and isolated, with an 89.7% illiteracy rate. Crops are plagued by pests and diseases (tristeza, wooly white flies, aphids), there is no health center or school, and the nearest clean water is 3km away.

With start-up support, and expertise from a US student knowledgeable in tropical pest and disease management, this community can produce fruit for home consumption and sales - ensuring economic self-sufficiency for the many women-headed households of Bukyerimba.

Although fruit and vegetable production is the main economic activity, farmers have received neither extension services nor training. However, URICT’s discussions with National Agricultural Advisory Services (NAADS) officials indicate that assistance will be forthcoming if the villagers start a self-help project. This will ensure sustainability after funding ends. The local NAADS Director has even agreed to be a project leader.

Child Human Sacrifice has been practiced in various cultures throughout history. Victims were typically ritually killed in a manner that was supposed to please or appease gods, spirits, or the deceased – for example, as a propitiatory offering, or as a retainer sacrifice when the king's servants die in order to continue to serve their master in the next life.

Busoga Eastern Uganda leads in the act of Child Human Sacrifice, with over 2-3 children sacrificed every week. The Ugandan police and the authorities have not properly responded to end Child human Sacrifice, because many of the rich, wealthy and corrupt government officials are directly involved in sacrificing children in Uganda.

URICT has opened up a program to take information to the people, and tell them that Child Human Sacrifice should end and a new era has come. That way the witch doctors and all the parents involved in child sacrifice will hear the call.

Bukyalimba, Bugonda, Busota, etc. Villages are the many villages which make up Namisambya 1 & 2 Parish. These villages alone have a population of, 7,876 people as per 2012. These are very remote and poor villages – most of the people in this community are either young or very old, showing a typical example of how HIV/AIDS has killed the youths or working age, leaving behind many little children and old grandmothers and fathers. This poor and remote village appears to be cut off from the rest of the world.

In this entire village, people mainly depend on basic farm fields and garden farming for their livelihoods; however, they are always at the mercy of the weather for them to plant their crops, they have to always wait for the rainy seasons in order to plant and till their gardens. This means that when it doesn’t rain on time, famine always strikes, killing several people.

There is an ever increasing school drop-out rate for girls because of water fetching; this is attributed to the fact that water fetching is a domestic duty of girls and women. On average, women and girls are walking for over four miles to JUST to tap 20 litres of safe clean water from the only protected well in the community.

Domestic violence cases increase as women and girls walk for miles to fetch water, they have to line up for hours before they can tap the water, then they have to walk back home, by the time they reach home, it's always very late and dark, so their husbands end up beating them, suspecting that they have sexual affairs elsewhere with other men.

And there are increased rape cases, and always women and girls are raped in the evening hours.

The water women and girls do is to resort to fetching water from open, unprotected water sources like in the swamps. Humans are now sharing these health hazard water swamps with animals.

This crisis in this community all originating from lack of access to clean water can be put under control. With just one borehole, the change will be instant and the community will be more happier and start living a normal life.

URICT is proposing an immediate intervention project entitled TAP AND REPOSITION RURAL WOMEN AND GIRLS (TRRWGP) to be implemented in 4 sub-counties (Namasagali, Butansi,Mbulamuti and Butinda) most near lake Albert and River Nile in Kamuli and BuyendeDistrict.

This project intends to support rural women and girls who dropout from school in (Vocational Skills) Education.

It is against such a background that Uganda Rural Information and Communication Technology (URICT) are proposing a project TRRWGP for 3 years. This project is entitled to address the gap of the skilled men and women. Gaps to address include scaling up the number of skilled women in tailoring and craft making.

Since men tend to be the decision makers in homes or relationship we intend to target them as agents of change to support theirs to seek vocational skills and also for them to understand their roles in supporting their couples to study vocational skills.

Community peer educators take the lead in community sensitization since they know and are closer to their communities.