Nigeria: We shared our stories, wept and danced - 'Tuko pamoya' 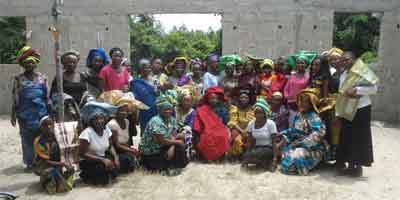 The celebration is still in the air - International Women's Day, and our riverside women are not left behind. The atmosphere became tense when the facilitator showed her code to triger the discussion for the workshop. It was Violence Against women.

There was a deadening silence which was immediately followed by a call for a minute's silence for all the women that fell in the battle field, those who died in active action and service for all. I mean women who rest in peace by force, they were those women who were beaten late into the night, went into a coma by husbands-turned-boxers and never came out alive. Although their partners never revealed the truth behind the sudden death.

Our one minute silence was for those Indian women, my beautiful sisters; who were intentionally burnt by their spouses; the sacred Indian kitchen accident. Our one minute was for the victims of rape, our sisters who gave up, thinking that the world is not worth fighting for, as they moved on a higher journey, where there won't be sorrow, slaps and the sudden rage of men. This one minute silence, I mean that excrutiating minute, was for our mothers who died while giving birth to those babies they dreaded during their pregnancies after seven alive and seven dead children.

Today, we stood a minute for our girls who died during the vaginal mutilation excercise; I survived this dastard act. Also we shared the minute silence with our sister, who was hit on her neck by her husband after just two weeks of delivery, she died. We stood in silence for all our sisters the world over, who gave up the ghost as a result of Violence Against Women.

This was immediately followed by a thundeorus clap for all the women in the world, who refused to give up in the face of oppression. Our sisters, though we have never seen you but we feel your stuggle, can we say as it is expressed in Kiswahili - "Tuko pamoya"? We are together with you and we send our clap offering to say Welldone.

Today we celebrated womanhood in our own local way at the riverside where women are not represented among the counsil of elders no matter their age. We celebrated ourselves, we checked our mileage and we realised that we are moving forward.

My story was our story...

So Many Heartwrenching Stories

It opened every blocked throat and stories began to flow like a river. Her mother was married off at the age of fourteen, she began forced menstruation after series of rapes from the man that she known as her uncle. At the age of seventeen, she was divorced because the neighbours had to report to the margistrate that the way the husband was beating her, she would die before her time. The marriage dissolved, the man accepted the son and gave the daughter to the young mmother. She began to pick empty bottles on the streets and these she sold to survive.

She was married to a primary school teacher who could not tolerate an illiterate for a wife; one midnight, he hit her head on the floor and she rested in peace. The teacher is still at large today.

After the sixth child, she began to report her husband to their pastor. "I cannot survive with more pregnancies", she reportedly said. The pastor responded, "It is the will of God to act according to your husband's precept, he is your head as Christ is the head of the church". She died after the delivery of the eighth child, the husband could not educate the children. All the seven children are illiterate except the eighth baby that was abandoned at the hospital and raised by the late woman's younger sister. The man who wanted eight chidlren could not afford to educate the rest.

Oh, the story of Zanele, our transformation sister in South Africa, she was raped by four men sent by her intended husband. After raping her, the husband sent cows and money to ask for her hand in marriage as is the custom and tradition of her people. She never recovered from the trauma, she died last month.

What are the causes of all this violence? So numerous but the chorus answer was 'wickedness.' Not culture, not custom, not religion not tradition, because a good man could be good inside his house. It is sheer wickedness that could make a man cut off his wife's nose, chop off her hands and also gun her down because of a plate of morsel - a story of a hunter that killed his wife in Ondo state - Nigeria last month.

What Can We Do?

How can we avert this disaster? 'Speak out' was the answer - do not hide a sore hand under your cloak. Help is near, every violated woman should seek help.

Celebrating Ourselves - Dancing and Gifts

The celebration was rounded off with dancing. We danced because we have fought so far and won so much, we have worked so hard and harvested this much; we can say, this is how far we have gone at the riverside. Our women wax stronger and they become bold day by day. They can feed their families and they appreciate eduation daily. They appreciate themselves more and they are more comfortable with their daughters, now more than ever.

We had 150 clothes that were donated by some women; these clothes were shared according to each woman's needs. We celebrated womanhood. We celebrated ourselves this day.