The Nigerian Sex Slaves of Delhi 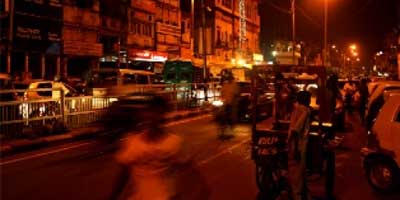 Can you please introduce yourself?

“I am Olufunbi Falayi. I am a social entrepreneur on a short training course in India.”

Can you please narrate your experience as regards to African girls in Delhi?

“I was attached to the Etasha Society as part of my workplace experience during my training and I was to understand the National Skill Development Corporation of India’s implementation model; I was accommodated at Tigri Kahampur.

In Kerala, where the institute was situated, it was not opportune for me to meet any Nigerian in Kerala; I was so happy when I saw many Nigerians on the streets of Delhi. On my first day, I was happy to see two black ladies; we exchanged pleasantries and decided to meet later in the day.

I invited [one of] the Nigerians to my room and we chatted about Nigeria politics and in a few minutes, she had become bored about the conversation and she asked, 'Why am I here; short term or overnight?'

I was shocked that she came to my apartment for sex, not for brother/sisterhood.

I was so embarrassed and asked, 'Why you are into this? I thought we were Nigerians; we are one and not just sex'.

She said 'Why do you think that I am here? I need to pay my boss some millions and I must deliver every day. My passport has been seized and will only be returned when I finish the payment.'

I sat on the edge of the chair. It was like watching a Nigerian film.

I told her to leave.

The following day, just the exact situation that I have narrated above happened between myself and a Ugandan girl. The Ugandan girl had been in India for six months. According to her narration, she was a hairdresser in Uganda. I asked why she should leave her job in Uganda to become a prostitute in India.

She informed me that she wants a better life and hairdressing is not a viable job in Uganda and India, so she needed to work day and night as a prostitute."

What do you think is the cause of African women migrating to India?

“There is a ready market in India. The Indian men want the African women. The major area is at Malvia Nagar. The place is filled with prostitutes.

The situation will bring tears to the eyes of a coward. I began to interview people about these prostitutes in Delhi; I learned that the HIV prevalence is so alarming, and I began to wonder how they will survive.”

What do you think about the situation?

“There are black corporate girls in New Delhi; some of them are working in corporate organizations while some are in schools and they live on campus – they do not roam around the streets at all.

I have a Nigerian friend in Delhi who could not visit me during my six weeks stay in Delhi because her school has strict policy. It is not all the girls that are into this forced slavery. There are many decent African girls in New Delhi. My main concern is the girls in the clubs at Select City Works Mall where they meet at night for pickups.

Having to work day and night in order to pay back millions of naira to their bosses who seized their international passports makes the matter look like a refined slavery."

Do you think that these girls will be willing to return to Nigeria?

“The bottom line is that they were jobless in Nigeria or they had jobs that could not sustain their livelihoods; therefore, the only way is to assure them of a reasonable way of livelihood and rehabilitation that will not force them to look back anymore.

Means of livelihood is not just to learn a skill that they may not be able to use, but a skill that will earn them enough to live a decent life.”

Can you give a rough estimate of how many Edo girls are working as prostitutes in Delhi?

This means that some of the Edo girls who were rescued from Italy might have found their way back abroad.

In addition to that, from my personal research, more girls from Nigeria and other African countries troop into Delhi as prostitutes. This does not erase the facts that there are other Nigerians girls who have legal and productive intentions, but the number of Nigerian girls who are into this type of predicament is growing by the day.”

What about Nigerian young men in New Delhi?

“When I was there, I usually visited the African kitchens; I see the young men smoking weed always, working on their computers and discussing about the client they meet online.

Once, I was eating and had to receive a phone call; I stepped outside, leaving my iPod behind.

After receiving the call, I walked back in and discovered that my iPod was missing. I turned to the men; there were five men, all Eastern Nigerians. I asked them about the iPod and one of them told me that, 'This is a public place and you should not have left any belongings'.

I was furious and replied, 'We are brothers, from Nigeria.'

They all laughed when I said that they were my brothers, and one of them said who is your brother? I reported the incident to the owner of the restaurant and she assured me that she will report the matter to their leader because they are cult members. After three days, I received a call from their leaders who asked me to pay 3,000 rupees if I want the iPod returned. I declined the offer.

I was ashamed to be associated with these Nigerians in the streets of Delhi. It was even harder because everyone sees every Nigerian as drug peddlers, scammers, etc.

It was frustrating and I truly pray that our government should find a lasting solution to the issue.”

You are welcome – and thank you, too, Tosin.

US Dept of State: Trafficking in Persons Report 2013 - Nigeria