Breaking the Silence and Shame of Harassment in Pakistan 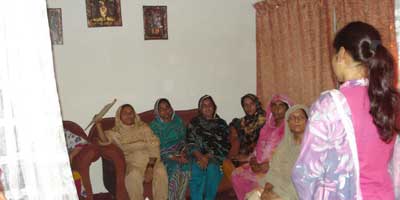 Disrespect for Women Begins at Home

When a man teases a woman on the road, in the bus, at the bus stop, in the a market, in the street, on way to college/school, in a hospital, in an office, on the job, in family functions by giving her different names and by engaging in meaningful conversation in her presence, she can say:

“Do not you have a mother or sister or daughter at home? Why do you not do this to them?”

This is what only a woman can say to make a man realize that if the women of his own family are respectable, then they are, too.

But the thing is, how will he learn to respect women?

Even in homes, mothers, sisters, and daughters are not being given respect –  where the father says all time that the kids are his, but he beats the wife because she gave birth to girls, where if the mother asks for anything, she gets humiliated by the husband, where a 5 year-old boy goes out with his 20 year-old sister or mother to “protect” her;  since that time he learns that the woman is weak and it is his duty to protect her and to do whatever he wants and feel good because being a man, he is powerful and women can do nothing without him.

Actually, from home, boys are trained to abuse and as a result, all our energies are used to protect women from men.

Not only this, but women are not safe at home sexually from their own family members.

Everyone Wants to Keep Silent

Or at the work place.

Recently, a boy in my office was using foul language while talking on phone, I stood up and asked him,  “Why are you talking like this? This is an office; you are not suppose to talk in this way.”

He listened to me and when I sat on my seat, he again did the same thing; no one among the men tried to stop him again. Every one wanted to just keep silent on such things.

I did not speak again because it would mean was that he wanted to provoke me –  so that later, he could make fun of me in front of other men.

“You Should Feel Ashamed”

Those women who try to take a stand on such things are thought to be bad girls.

Here, society does not call it courage; people here do not appreciate such actions, but think she is a shameless woman who is trying to stop this kind of violence.

A few years ago, a colleague of mine sent me an email with very wrong photos of some models. I got very angry and sent those photos to the higher boss, and said I will not forgive him, the one who sent me those photos – he must be punished for this or I will take a stand on other forums against this harassment

My whole team said, “You did the wrong thing; girls should not do this. You should feel ashamed about it.”

I still felt was it my mistake later when that man called me on the phone and said,  “One day I will tell you what I can do with you.”

However, I fought until the end and went through every channel to get him punishment because I was not wrong.

Taking a Stand Against Harassment

This is the harassment that we women have to face on daily basis.

And when we react on it, our society says we should feel shameful about it.

Why not those who did this to women?

This is how our confidence is being broken and still we are “wrong” if we take a stand against harassment.  Most women do not raise a voice and our society even stops those women who try to stop this violence – because they think that women are weak and cannot fight for themselves.

I know why it is so: it is because women do not have awareness of their rights and they are weak because they are not independent –  and for independence, we have to fight.

We have to get it.

No one will give it to women until we ask for it.

We Have to Be the Voice

Awareness is very important and we need to instill in them a belief that someone is behind them. That they are supported.

We who are educated –  who have access to the world through social media, who have courage to speak –  we will have to be a voice for women who don't yet have a voice.